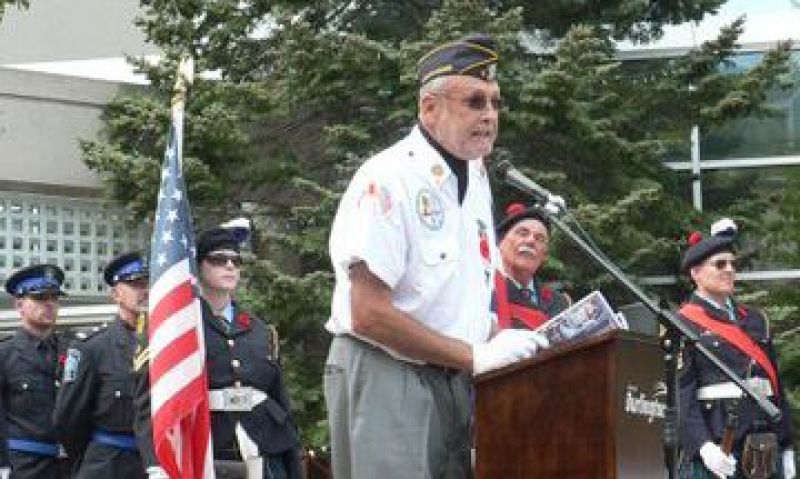 Bob Winder addresses the crowd at City Hall in Burlington, Ontario, Canada, in 2015 during ceremonies marking the 70th anniversary of the end of World War II. (Photo via Bob Winder)

Bob Winder is commander of Toronto American Legion Post CN05 in Milton, Ontario, Canada, and lives in Milton himself, but has his department membership in New York state. To those familiar with Foreign and Outlying Departments and Posts of The American Legion (FODPAL), this makes perfect sense, but to many of New York’s Legionnaires it wouldn’t.

So the 33-year member, who is also commander of Canada County, contributed to a piece for the autumn 2020 Legion New York magazine on what exactly Canada County is. The 1994 reorganization that led to some foreign departments being disbanded assigned posts throughout Canada to their nearest U.S. state. The Ontario posts got New York – but the state already has an Ontario County. So “Canada County” was created within the department for the Canadian posts.

In reporting to FODPAL leadership about the article, Winder said it “hopefully will make the Legionnaires of New York state realize there is an entity within our Legion, that there are other departments and posts outside of the continental United States.” Of the changeover: “At first we were simply District 63, and when we attended the conventions we were hardly noticed as so few of us were in attendance. A few years later we were moved into the fold of District 8 itself (The Mighty Eight) and several of us attended district meetings; we were made to feel very welcomed, and they were very accommodating and friendships were formed.”

Winder has also written a piece, “The American Legion in Canada,” that is available on FODPAL’s history page.