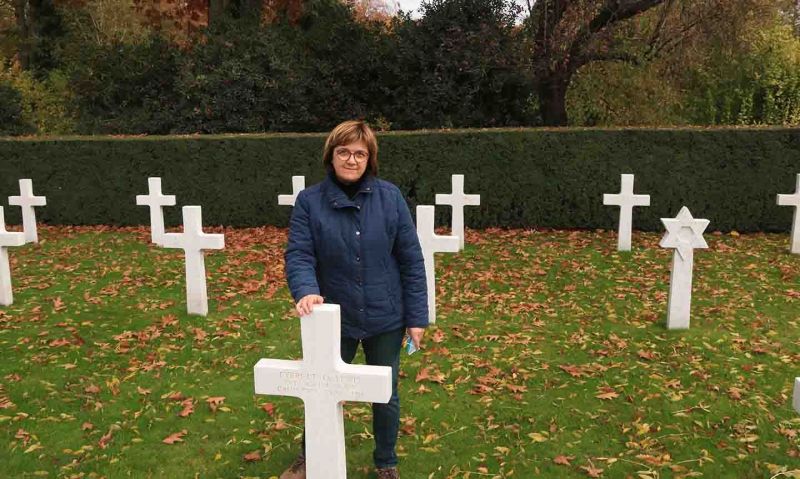 America declared war on Germany on April 6, 1917, in the Great War that had been raging in western Europe for nearly three years. This was the first modern war with machine guns, tanks and aerial combat, and the casualty toll was horrendous. At the time of America’s entry, the war was essentially a stalemate of exhausted armies with no end in sight.

Although President Woodrow Wilson, in the election of 1916, campaigned on the slogan “He kept us out of war,” he quickly changed his tune after winning re-election, strongly supporting America’s entry into the war to assist Britain and France and their allies proclaiming “Make the world safe for democracy,” a catchy but very vague phrase, quickly gaining public support amid the Congressional Declaration of War. The Selective Service Act, popularly known as the draft, soon followed on May 18, 1917, to provide troop strength for this major military effort.

On June 5, 1917, Everett D. Lewis, a native of Miller, Mo., working in Los Angeles as a carpenter, registered for the draft. He was soon inducted into the U.S. Army and was assigned to the 91st Infantry Division, 364th Infantry Regiment.F ollowing organization and training at Fort Lewis, Wash., the 91st Division departed for England, a component of the American Expeditionary Forces (AEF) led by Gen. John J. Pershing, and then entered combat in France.

The 91st Division fought effectively in the Meuse-Argonne Offensive, helping destroy the German First Guard Division, and the Saint-Mihiel Offensive. In August 1918 the Allied Command launched an offensive across the Western Front. In Belgium an army group comprised of Belgian, British and French units fought in the Ypres-Lys Offensive beginning Oct. 20. The Allied offensive was successful in advancing against the Germans, but exhausted the group. The 37th and 91st divisions of the U.S. Army were sent to Belgium to support this nearly stalled offensive.

Everett wrote a newsy letter to his mother on Oct. 26, 1918, commenting on frequent movements of his unit, increasing rain with the fall weather and being in a building constructed by the now-retreating Germans. He could not state his location due to censorship, but he was probably in Belgium at the time. He looked forward to getting home to see his parents and helping his papa with the farm work, expecting that the war would be over by winter. Desiring to have Christmas dinner at home, Everett acknowledged that this year it would be “over here” out of a U.S. mess kit.

Positioned in the center of the army group line, the 91st Division launched a major attack against strong German resistance on Oct. 31 in Spitaals Bosschen near Waereghem and suffered heavy losses. On Nov. 1, Pvt. Everett Lewis was hit in the hip by German machine-gun bullets. He succumbed the following day to this injury. His remains were buried in the temporary AEF Cemetery at Staden, West Flanders, Belgium. After establishment of a permanent American Military Cemetery at Waereghem, also in the West Flanders region, his remains were relocated to this site, which became known as the Flanders Field American Cemetery.

After the war ended, the next-of-kin of deceased military personnel buried in Europe could elect to have the remains brought to the United States for burial in the Arlington, Va., National Cemetery or a private cemetery of their choice. Initially Edward B. Lewis, Everett’s father, requested that the body be shipped to Miller for burial in the family plot at a cemetery in the nearby Gray’s Point community. In a subsequent letter signed by both parents, rescinding their original request, they advised that they had decided to let the body permanently rest in Belgium.

On June 20, 1931, Mollie Lewis of Red Oak Township boarded the 1:50 p.m. southbound passenger train at Miller, beginning a long journey to visit her son’s grave in the American Military Cemetery at Waereghem, Belgium. In 1929 Congress enacted legislation that provided for the mothers and widows of deceased soldiers interred in the cemeteries of Europe to visit their graves. Lewis made her pilgrimage under the provisions of this act. She was joined at New York City, where the members of her travel group to France and Belgium assembled.

The Flanders group arrived at Lille, France, near the Belgian border, on July 6. Daily visits to the Flanders Field American Cemetery, located 26 miles from Lille, were made on three successive days. Each soldier’s grave is marked with a cross of white Italian marble bearing the name, rank, unit, date of death, and state from which the deceased had entered the service. Ample time was allotted each day for the mothers and widows to visit the grave of their loved one with no other activities scheduled. Lewis was photographed standing by Everett’s grave marker.

Their cemetery visits completed, the Flanders group and escorts left Lille on the morning of July 10, beginning their long journey home that included five days’ leisure time in Paris. Mollie Lewis arrived in Miller on July 27, 37 days and thousands of miles after leaving.

Following World War II, Belgian citizens began a systematic process of honoring deceased American soldiers buried at American cemeteries in their country. Families formally adopted individual graves and periodically placed flower arrangements or wreaths on the graves of those who gave their lives liberating Belgium from German occupations in the two world wars. Contacts with the American families of the deceased are made when possible, often resulting deep, enduring friendships between both families. Grass clippings from the graves of the deceased soldiers are sometimes sent to their families.

Anne-Mieke Ampe and husband Dirk Dhaene (acquaintances of the author) adopted Everett’s grave on Aug. 16, 2014, and continue to this day. They also adopted John Lewis Wagner of St. Charles, Ill., a first lieutenant and B-17 bomber co-pilot of the 351st Bomber Squadron, 8th Air Force, who died on Dec. 11, 1943, when his plane crashed into the North Sea off Norderney Island after being hit by enemy fire. Some of the 10 crew members bailed out, but only gunner Staff Sgt. James A. Grosskopf, survived and was taken prisoner. Their B-17, named “Sugar Foot,” was on a mission to bomb the submarine pens at Emden, Germany. Planned P-47 fighter cover arrived too late to protect the bombers from enemy planes.

Lt. Wagner’s body was never recovered, and his name is inscribed on the Tablets of the Missing at Netherlands American Cemetery and Memorial near Margraten, Netherlands. The body of Staff Sgt. Gonzalo C. Orta, tail gunner, was recovered later the same day as the crash by the German rescue ship Hamburg. Navigator 2nd Lt. Albert C. Warford’s body washed ashore on or about March 17, 1944. Anne-Mieke and Dirk adopted Wagner’s name in May 2016. They have been unable to make contact with his family.

Long lists of adoption applicants continue at U.S. military cemeteries in western Europe as they await graves and posted memorial names of the missing to become available. America greatly appreciates these faithful adopters who honor our fallen soldiers and perpetuate their memory.

[The American Legion maintains the Overseas Graves Decoration Trust Fund for FODPAL posts and departments to "decorate the individual graves of those veterans laid to rest in cemeteries (on Memorial Day) that are not under the control of the American Battle Monuments Commission." Learn more here.]