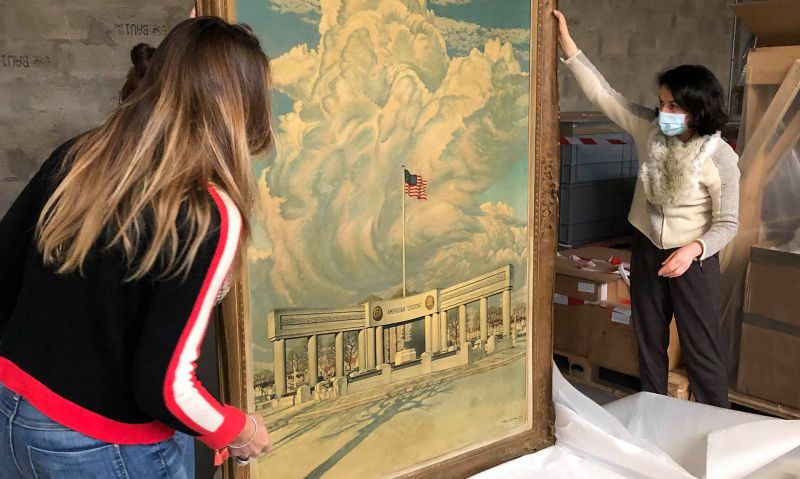 The American Battle Monuments Commission (ABMC) is lending two pieces of art from its historical collections to the Cité de l’Architecture et du Patrimoine museum in Paris for an exhibition planned from now to March 6, 2023, and one is of a mausoleum connected to The American Legion.

“Art deco France – North America. Mutual Emulation” shows how the Art Deco movement spread from Paris in the 1920s, influencing art, fashion, architecture and culture on both sides of the Atlantic. In addition, the exhibit also introduces some of ABMC’s sites, such as the Chateau-Thierry American Monument or the Lafayette Escadrille Memorial Cemetery, as well as Paul Cret, ABMC’s consulting architect after World War I who was at the origin of the design of several ABMC sites.

The American Legion Paris Post 1 Mausoleum was painted in 1962 by Tom Schenk. It is located in the Neuilly-sur-Seine cemetery on the west side of Paris, near La Défense. It was established in 1936 to inter American veterans from World War I, and it expanded after World War II to hold additional war dead. Burials continue to be performed to the present day, as well as Post 1 ceremonies. The commission and museum performed restoration work on the painting prior to its exhibition.

“This partnership is a great opportunity for ABMC to reach a broader audience and ensure visitors of the museum know more about us and our mission,” said Charlotte Meunier, ABMC museum curator. “Through this exhibition, ABMC also enables the public to discover two of its amazing pieces of art and educates them to our mission, touching people that would not visit our sites or know about them. Art is a different – and perhaps surprising – means for us to echo Gen. John J. Pershing's promise that ‘time will not dim the glory of their deeds.’”