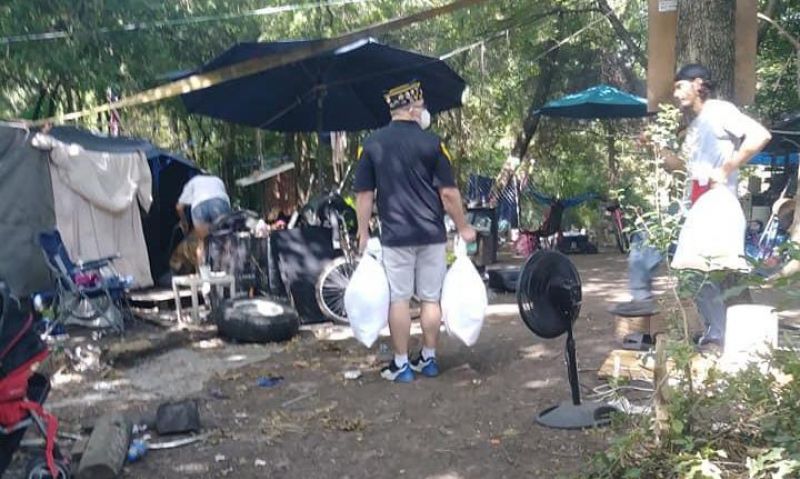 Several months ago items of clothing and toiletries were donated to American Legion Laramore-Osborne Post 100 in Royse City, Texas. Even though the post didn’t have an immediate need at the time for the donations, “we were not going to turn it down. If you give it to us, we’re going to find a way to get it to somebody,” said Post 100 Adjutant Jason Castleberry, a 2018 National Legion College alum.

The recipients “were so appreciative. They thanked us over and over again,” Castleberry said. “We’re not solving an issue here but we were at least able to provide them with a little bit of relief. Something they didn’t have but needed.”

New Post 100 member Coty Jacobs, who has worked with the homeless population in the past, provided the connection to nonprofits in nearby towns that support the homeless community and could identify where needs were. From there, Post 100 Legion Family members gathered the supplies, packed them and coordinated the delivery. “It was a team effort,” Castleberry stressed.

Castleberry said “it was really sad” to see the homeless camps firsthand and to learn that they were drinking water from the creek close by and that people were coming into the camp at night and starting fires to run them out.

“There’s a poverty issue in our country. Whether it’s veterans that are homeless or just people who are homeless, it affects us all," Castleberry said. "So anything that we can do to provide them a little bit of relief, whether it’s a veteran or someone else, we try to do it at our post.”

Post 100 plans to conduct another delivery of care packages to the homeless in early August, thanks to the outpour of support from the community with their initial efforts. “We have a great community. They have gotten behind anything that we’ve done,” Castleberry said. “And we have such a great post; we just have a giving heart.

“We are happy to be able to take the platform that we have with The American Legion and be able to do good with it and make a difference in the lives of other people.”