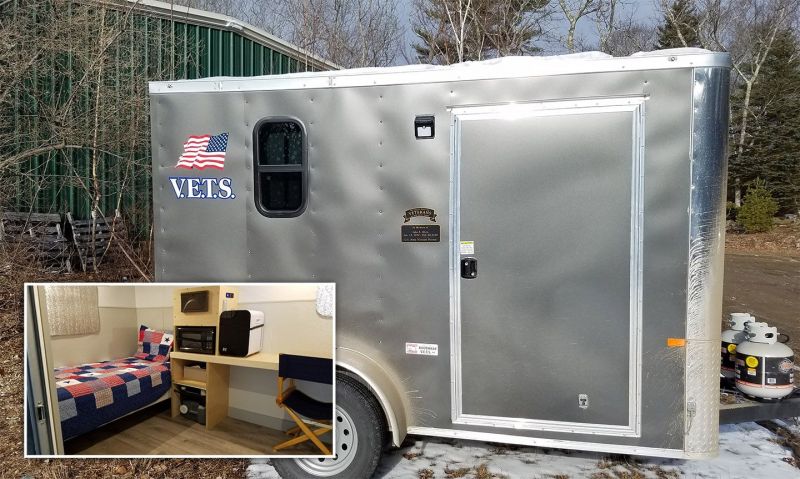 A project by a small group of Maine Legionnaires to provide temporary housing for homeless veterans has grown considerably in the past year. And it could not come at a better time.

Boothbay V.E.T.S. (Veterans Emergency Temporary Shelter), started by Charles E. Sherman Jr. Post 36 Legionnaires Ed Harmon, Arthur Richardson and John Hargreaves, picked up momentum in 2020 at a time when Maine’s homeless veterans population began to grow amidst the coronavirus pandemic. What started with one storage trailer retrofitted into livable space has grown to four trailers, with four more on the way.

Harmon, Post 36’s service officer and the commander of Sons of The American Legion Squadron 36, originally purchased the prototype and worked with Richardson – who has an electrical license and a background in carpentry – to convert it into a one-room living space complete with a bed, nightstand, end table, chair, microwave and refrigerator.

And it has heat, a must during Maine’s brutal winter months. Having gotten nonprofit status for Boothbay V.E.T.S., Harmon and the others rely heavily on donations to sustain the program. And they’ve been successful doing so.

“We knew the money would come when people saw we were real,” Harmon said. “The prototype is one thing. But a lot of organizations, when they just getting off the ground, people wait to see what actually happens. We have proven what we are. People see that what we do is for the vet. John … he knew. He said ‘this is gonna take off.’”

The trailers are designed to provide a place for a veteran to stay while he or she awaits placement into a long-term facility. Four currently are in use, assisting five veterans in the past month, while four base units of the trailers are scheduled to be manufactured in Georgia next in late January and delivered to VETS in February for refurbishing. Once they arrive, Harmon said they’ll order four more trailers.

Meanwhile, the prototype will be converted into a wider unit to allow for couples, married or otherwise, to stay in until they secure housing elsewhere. All of the units are powered by plugging the trailer into a regular electrical outlet located outside of a home or facility. And all of the new trailers have doors wide enough to allow for a wheelchair to enter.

The trailers are available to veterans anywhere in the state. One has gone as far as near Acadia National Park, which is more than 110 miles from Boothbay. Harmon said the veteran now using the V.E.T.S. trailer had been living in the park for 100 days.

“The (veteran) went inside (the trailer), looked around, sat on the bed and said ‘I just died and went to heaven,’” said Harmon.

Providing the temporary housing is critical at a time when the state’s homeless veteran numbers have gone up significantly since the pandemic started. Maine’s homeless veteran coordinator, Jarad Greeley, told News Center Maine, “Our numbers from pre-COVID to where we are now have gone up 40 percent,” adding that “what we’re all afraid of is all the evictions that have been put on hold for a while, when the protections get lifted and all the evictions happen at once, it will overwhelm the system.”

Boothbay V.E.T.S. works with Maine’s Bureau of Veterans' Services to place veterans in the trailers but has cut out one step in the process in order to get the veteran out of the cold and into one of the trailers as soon as possible. “Our rule is that if a vet says he’s a vet, and doesn’t have a DD214 and doesn’t have a (Department of Veterans Affairs) card, you have to put him in our trailer,” Harmon said. “He’s a vet until proven otherwise. And if it’s proven otherwise and he’s not a vet, we’ve saved his life for a few days.”