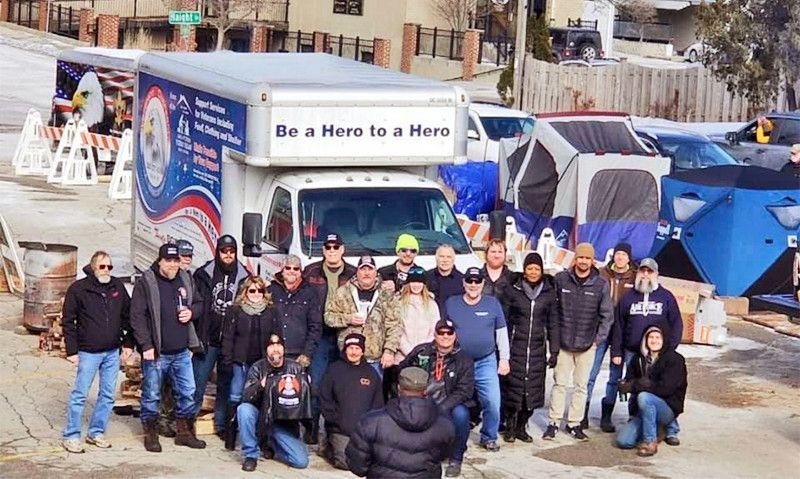 A few years ago, members of Sons of The American Legion Squadron 294 in Hartland, Wis., discussed the idea of staging an event to raise awareness about veteran homelessness. Discussions were tabled until 2020, when Squadron 294 Commander Mark Pape said, “We took the bull by the horns and said, ‘We’re going to do it this year. We’re going to make it happen.’”

The first event took place that year, with members of Post 294’s American Legion Family sleeping outside of the post in tents and cardboard boxes in frigid February temperatures. Another “Sleepout for Veterans” took place in 2021, as did one Feb. 11-13, when around 30 people slept outside for two nights in temperatures that ranged from the high 20s to single digits.

Pape said choosing to sleep outside during the Wisconsin winter made a bigger impact. “Anybody can sleep out in May or June,” he said. “So, the idea came up that we’d sleep out in February in cardboard boxes, small tents and small shelters to simulate what the homeless go through. What they have to deal with every day – especially in the wintertime.”

VOW’s program in Racine provides a village of tiny homes for veterans, along with a food market and trauma-informed programming.

During the initial “Sleepout for Veterans” in 2020, Modern Woodmen – a fraternal financial services organization with an office in Hartland – offered to match the first $2,500 raised by Squadron 294. “So that was our goal: $5,000. If we make a little more, so be it,” Pape said. “Our first year we raised $20,000 on the two-night sleepout. We were just getting our feet wet, kind of sticking our toes in the water and not knowing what to expect. And the community just came out and supported us. We did clothing drives and food drives, and besides the $20,000 we raised … we filled box vans full of food and clothing that we sent to each of these organizations.”

Squadron 294 set a goal in 2021 of topping its 2020 effort. But when all the totaling was finished, their event had raised double that amount, hitting $40,000 – again splitting the money evenly between VOW and MHVI.

So far, this year’s event has raised $46,000, with what Pape said is at least another $5,000 yet to be collected. That doesn’t include the clothing and food again that was donated during the three days.

Pape said he believes the fundraiser has been so successful for multiple reasons. One, Squadron 294 has turned it into event that includes live music on Friday and Saturday nights for those who attend and wish to go inside the post.

But he also believes that taking the event outside – and being able to promote it in both traditional and social media – has made a difference. So has having a strong support team in place, one that starts planning for the sleepover in October.

“It’s an awful lot of coordination to get everything done,” Pape said. “I have great people I work with. It’s not me or any one person in our organization. It is an ‘us’ mentality.

“We were just looking to bring real awareness to the homeless veteran project, not only in Southeastern Wisconsin, but across the country. We wanted to start with our post first, our squadron.”