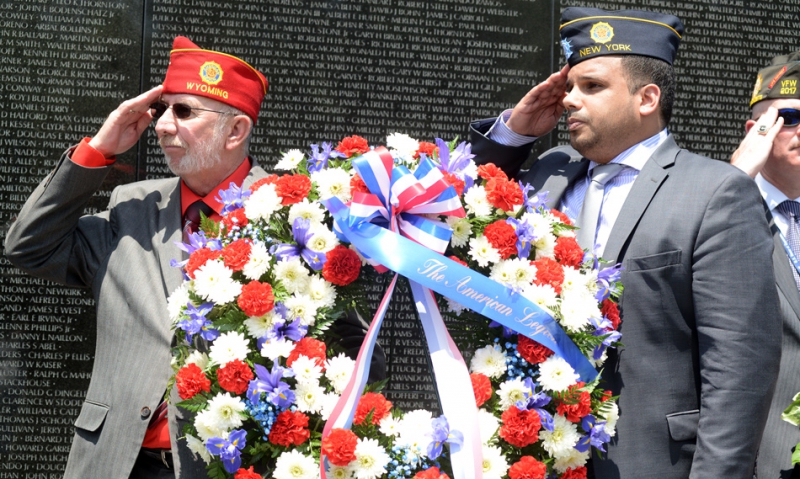 Countless Americans from all walks of life converged across Washington to partake in Memorial Day activities and ceremonies in commemoration of the men and women who lost their lives while bravely serving their country. Legionnaires were among the ranks of distinguished guests participating in the various ceremonies and observances.

Notably, events at Arlington National Cemetery, the Vietnam Veterans Memorial and others around the Capitol set the tone for the day. Additionally, members of Legion posts in and around the Washington area lended helping hands during local events and held their own ceremonies.

Following the ceremony in Arlington, hundreds gathered at The Wall, leaving mementos of friends and loved ones near their names inscribed in the black Granite.

“Their names are a glorious beacon for all those who value liberty above all other things,” said keynote speaker and Medal of Honor recipient, retired Army Col. Jack H. Jacobs. “It’s our freedom and the freedom of tens of millions of other people that resulted from their service and sacrifice.”

Jacobs said he felt honored to stand with his comrades and recognize their service. He went on to mention the different ways people across the nation pay their respects during Memorial Day and reminded the audience of how important it is to continue the tradition of honoring the fallen.

“You are here today because you haven’t forgotten why this is a holiday,” he said. Jacobs told a tale of a woman who accosted Benjamin Franklin and asked him what kind of government he formed.

Additionally, tribute was paid to the eight names recently added to the wall.

While the mood was somber, Col. Jacobs concluded the ceremony on a high note.

“I’m frequently asked what I think about Memorial Day. Same as I do every day, the sacrifice of young people so we can be free,” he said. “It is our mission to make sure we don’t squander their sacrifice – but most of all that we do not ever forget.”