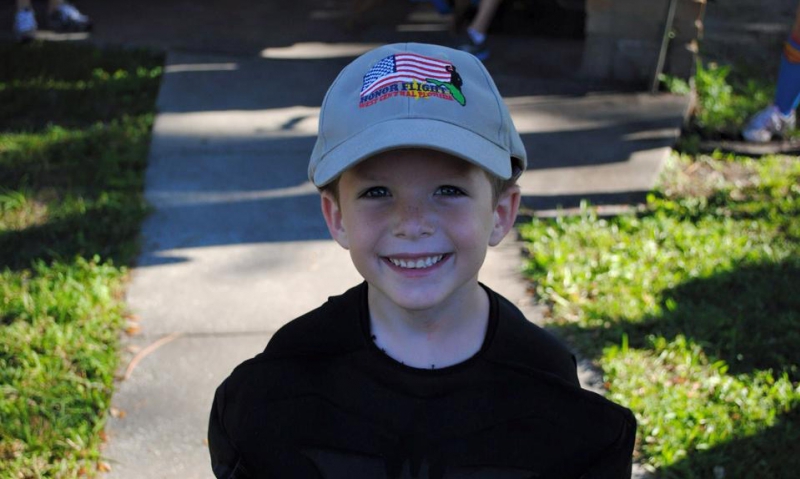 In 2013, then 6-year-old Alan Landers promised Korean War veteran Earle Sebring that he would send him on an Honor Flight “because he deserved it.” On Nov. 1, Landers made good on his promise.

Sebring boarded a plane at St. Pete-Clearwater International Airport bound for Washington, D.C., thanks to the fundraising efforts of Landers.

Over the past four years, Sebring is one of 100 veterans that Landers has sent to D.C. to visit memorials dedicated to their service and sacrifice. The 10-year-old from St. Petersburg has raised more than $40,000 for Honor Flight of West Central Florida through donations and his Superhero Fun Run.

Veterans are important because “they are the real heroes,” said Landers, a member of Sons of The American Legion Squadron 275 in Dunedin, Fla. Sending veterans on an Honor Flight is Landers’ “special way of thanking them.”

The idea to combine his love for veterans and superheroes into a fundraising event originated when Landers’ class assignment in first grade was to do a community service project. His initial goal was to raise $400 to send one veteran on an Honor Flight; however, between the run and donations he exceeded his expectations and raised more than $3,000.

The Superhero Fun Run is now held twice a year at Freedom Lake Park in Pinellas Park where participants wear superhero apparel. It started out with about 25 family and friends and has turned into an event with more than 100 participants. He also took his love of bowling and turned it into another Honor Flight fundraiser last September where members of Post, Unit and Squadron 275 helped out.

“Alan is a little boy with a big heart. As his mom, I’m very proud of him!” said Linda Landers.

Linda served as Sebring’s guardian to D.C., but upon his arrival back to the airport Landers took over, walking him through a crowd of cheering people who came to support the Honor Flight’s welcome home event. With each Honor Flight of West Central Florida, Landers is at the airport to personally welcome them home.

“I really enjoy seeing them happy at the welcome home events,” he said. “(America’s veterans) deserve the happiness the memorials bring them.”

Landers, and his mother, don’t foresee an end to fundraising for America’s heroes.

“He doesn’t have an end goal; he just wants to keep raising money for the veterans,” Linda said. “He is truly my little man with a big heart.”

Save
Tags: Honor & Remembrance, Sons of the Legion