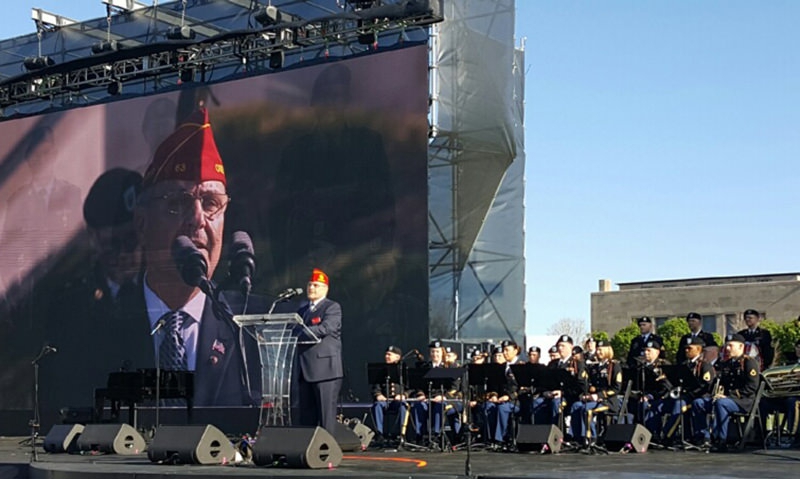 At an historic commemoration of the centennial of U.S. entry into World War I, American Legion National Commander Charles E. Schmidt joined representatives from 27 countries in paying tribute to all who served, praising their “spirit and legacy that endure and inspire us a century later.”

Nearly 4,000 people gathered at the National World War I Museum & Memorial in Kansas City, Mo., on Thursday for “In Sacrifice for Liberty and Peace,” a fusion of live performance and film illustrating the nation’s decision to go to war – and the price it paid. Of the more than 2 million Americans who fought “over there,” 116,516 died and 204,002 were wounded.

During the ceremony’s prelude, Schmidt told the crowd that returning veterans had a sense of great responsibility to the nation and their comrades in arms. Nearly 700,000 joined the Legion, founded in Paris in March 1919. Their generation created the Veterans Administration, drafted what became the U.S. Flag Code, and wrote the GI Bill – widely considered the most significant social legislation of the 20th century.

“They did not wait for the government to serve them,” Schmidt said. “They served the government, their communities, states and nation. Foremost, they served each other … They assumed, correctly, that they would be the arbiters of American patriotism, pride and remembrance. And, as they did in the war, they stuck together.”

Broadcast on giant screens outside the Liberty Memorial and streamed live online, the program opened with words from descendants of notable World War I figures, such as Helen Patton, granddaughter of Gen. George S. Patton; Sandra Pershing, who was married to the late Col. John Pershing, grandson of General of the Armies John J. Pershing; and Noble Sissle Jr., son of Noble Sissle, the jazz legend and drum major of New York’s 369th Infantry Regiment (the “Harlem Hellfighters”).

Patton set the tone by reading "For Our First Dead," a poem written by her grandfather – then Lt. Col. George Patton – just before the Battle of St. Mihiel in 1917:

There let them rest, wrapped in her verdant arms

Their task well done. Now, from the smoke veiled sky,

They watch our khaki legions pass to certain victory,

Because of them who showed us how to die.

She then sang a poem written by Lt. John Hunter Wickersham, who actually died at St. Mihiel and was posthumously awarded the Medal of Honor. Pondering war and heroism – you wonder if they haven't sort of got things twisted up – his thoughts turned to a soldier's mother back home:

And don't you reckon maybe it's her tears, and not the rain

That's keeping up the patter on your old tin hat?

Through the reading of passages from American writings a century ago, complemented by period photos and video, the program outlined step by perilous step how a reluctant United States was drawn into Europe’s conflict – not for America’s own survival, but the survival of the ideas of freedom and democracy.

Excerpts focused on the already raging war in Europe, American volunteerism, the fierce debate over the war, the service of immigrants and minorities, and how Germany’s overtures to Mexico and unrestricted submarine warfare tilted the scales for U.S. involvement. Between segments, musical interludes featured performances of some of the era's popular songs, such as “Alexander’s Ragtime Band,” “I Didn’t Raise My Boy to Be a Soldier,” “America, Here’s My Boy" and “If He Can Fight Like He Can Love, Good Night, Germany!”

After narrators related Wilson’s request to Congress to declare war, the audience stood again for a moment of silence, a tolling of the bell and cannon fire from Delta Battery, 1st Battalion, 129th Field Artillery Regiment.

Robert Dalessandro, chairman of the U.S. World War One Centennial Commission, said the program framed the context for U.S. involvement in the war: what happened before America sent troops overseas, what the stakes were, and how it changed the nation’s attitude toward the world – in effect, opening the “American century.”

“We patterned this after the event the British held at the Somme last year,” said Dalessandro, a retired Army colonel and member of American Legion Post 24 in Alexandria, Va. “We didn’t want speaker after speaker coming to the podium to wax eloquent about World War I for an hour or two. What we wanted to do was expose you to the words of people of that period – the words of Woodrow Wilson, the words of people who opposed the war, people involved in the war, people who were financing the war – so you understood how they felt. We wanted you to look at the war through the lens of the period and not the 21st century.”

Those who attended the commemoration were moved and likely challenged too, said John Monahan, the Legion's representative on the U.S. World War One Centennial Commission.

"We really wanted to set a balanced tone because there was much debate about America entering the war," he said. "Our interest was not self-evident. It wasn't about any existential threat to our country. It was about preventing democracy in Europe from being overrun by autocratic monarchies and Prussian militarism.

"From the Legion perspective, I believe the ceremony offered a better understanding of the spirit that motivated our founders – the spirit of sacrifice, of brotherhood, of working together toward a common goal. The centennial is an opportunity to reflect on what the Legion means to our communities and our nation. It's an opportunity to revisit, rethink and, in fact, rededicate ourselves to those ideals."

For Kenny Goth, the Missouri American Legion’s National Executive Committeeman and a Navy veteran, the ceremony had personal significance. His grandfather, Amos Sersey of Clinton, Mo., was an Army private who served in the Great War.

“I’m honored to be here,” he said. “This was the start of a great generation. Even though they are no longer with us, they will never be forgotten.”

Watch "In Sacrifice for Liberty and Peace" here.