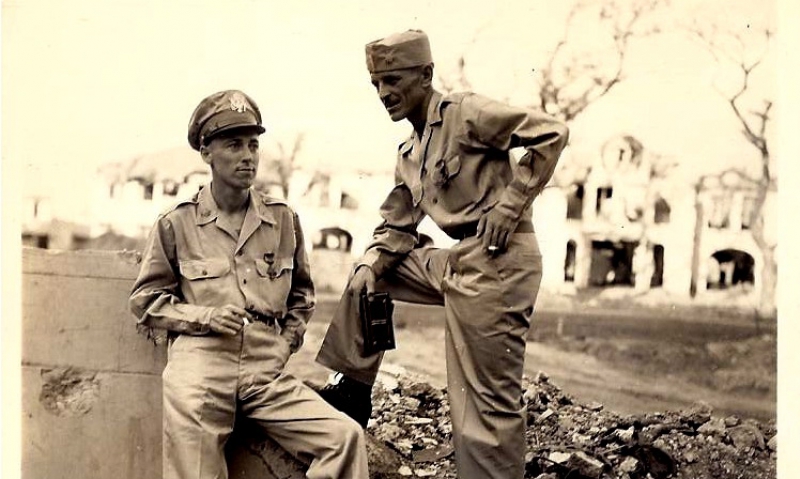 Ramsey’s life story is described in the new documentary, “Never Surrender: The Ed Ramsey Story,” which was co-produced by his widow, Dr. Raquel R. Ramsey. She says it is a story of sacrifice and survival. “I would like to reach out to new eyes, ears and hearts so they may learn of my husband's legacy,” she said.

The documentary of his storied life had a screening at the Ronald Reagan Presidential Library on May 8, the eve of what would have been Ramsey’s 100th birthday.

Much of the documentary is based on Ed Ramsey’s book “Lieutenant Ramsey's War, From Horse Soldier to Guerrilla Commander,” published in 1990. Ramsey died in 2013 and now rests at Arlington National Cemetery. He was a life member of The American Legion; his wife is still a member of the American Legion Auxiliary at Pacific Palisades Post 283 in California where they used to enjoy regular dances. “I love that post, having had so many dances there, brings me back,” said Raquel.

Ramsey learned to overcome tragedy as a child when he lost his father at age 12. But his book acknowledges a great deal of constructive influence in his life.

“The daring and indomitable courage of my sister, Nadine, probably set the stage for many of my later actions and decisions,” he wrote. “But most of all, the constant love, unquestioning support, and faith in me expressed by my mother, Nelle Ramsey, formed the dominant factor in my life and the ultimate development of my character.”

His oldest son, Col. Edwin Ramsey Jr., describes his father as a fighter and a survivor. “He survived ambushes, bombardments, dysentery, malaria, and the removal of a ruptured appendix (without anesthesia) during World War II, and he fought back to make it possible for the Philippines to be retaken by General MacArthur with much less loss of allied lives than would otherwise have been spent in that campaign,” said Ramsey Jr. “At one point he was reported dead to his mother and managed to surface alive and well. His strength of purpose and his will to live were an inspiration to all of us.”

As a troubled teenager, his mother sent him to the Oklahoma Military Academy in Claremore, Okla., where he learned structure and developed his love of horses. He became an expert horseman and skilled polo player.

Ramsey enlisted in the Army in 1941. He was assigned to the 11th Cavalry Regiment in Campo, Calif., when he jumped at the opportunity for service with the elite 26th mounted Cavalry Regiment in the Philippines. In the documentary Ramsey says, “I didn't even know where it was, except that it was a warm country, it was tropical and they had a good polo team there.”

Ramsey describes the time in his 1990 biography. “The life of the old cavalry was unique to itself. We wore riding breeches and high boots, and our round campaign hats were tilted at a meaningful rake across one eye, the strap stretched beneath the chin. I was 23 years old, proud and invincible. With two fellow lieutenants I raced almost daily over the hills, vaulting barriers and sliding sheer drops. Then, in the evenings, we trained our mounts in the delicate arts of dressage, urging them through intricate patterns with invisible shiftings of our hands, legs and weight.”

The seemingly charmed life the cavalry officers enjoyed in the Philippines during peacetime came to abrupt halt when Pearl Harbor was attacked in December 1941.

Ramsey set a standard for the fortitude and determination of those who have fought against overwhelming odds to protect and defend the freedoms we all hold so dear.

As a first lieutenant, Ramsey was in command of a 27-man unit of mostly Filipino scouts known as G Troop. On Jan. 16, 1942, they encountered a Japanese battalion (500-600 infantrymen) on the Bataan peninsula. Heavily outnumbered by a force supported by tanks, Ramsey unhesitatingly ordered the last cavalry charge in American military history. The surprised Japanese broke and fled.

“I brought my arm down and yelled to my men to charge,” he recalled in the book. “Bent nearly prone across the horses’ necks, we flung ourselves at the Japanese advance, pistols firing full into their startled faces. A few returned fire, but most fled in confusion, some wading back into the river, others running madly for the swamps. To them we must have seemed a vision from another century, wild-eyed horses pounding headlong: cheering, whooping men firing from the saddles.”

Ramsey and his men held their position for five hours under heavy fire, until reinforcements could be brought up. He would later be awarded the Silver Star and the Purple Heart for this action that day. When U.S. forces were ordered to retreat, Ramsey wasn’t ready to give up. With military approval he joined the Philippine resistance and eventually took command of a guerrilla force that grew to nearly 40,000. They fought using captured and hand-made weapons, gathered intelligence, and distributed propaganda.

When he finally met the American troops he was down to only 93 pounds and would spend nearly a year in the hospital recovering from the toll the Philippines had taken on his body. Suffering from malaria, dysentery and malnutrition, Ramsey received a medical discharge in 1946.

MacArthur personally awarded Ramsey the Distinguished Service Cross for his guerrilla activities. Already a major in 1943, Ramsey was promoted to lieutenant colonel shortly before being ordered back to the United States.

His leadership didn’t stop at the end of the war. After the military Ramsey attended law school, became an executive at Hughes Aircraft in Glendale, Calif., and lobbied Congress to provide benefits for the Filipino men and women who so bravely fought under his command. Ramsey maintained special regard for the people who served with him. “He was more of a Filipino than most Filipinos,” said Raquel.

To this day Ramsey is revered in the Filipino-American community second only to MacArthur as their most beloved American. Every president of the Philippines decorated him.

“I appeared in Congress three times, getting recognition of the Filipinos for those who distinguished themselves alongside him in battle,” Ramsey said in an interview in the documentary.

Ramsey died of natural causes on March 7, 2013, and was buried with full military honors at Arlington on June 28. A Celebration of Life Memorial Program was held at Sheraton Pentagon City American Legion Post 177 where an American Legion Color Guard presented colors.

Ramsey’s courage, leadership and military service are legendary. Recognized as much for his superior skill on the polo field as his smoothness on the dance floor, the young man from Oklahoma became a historical warrior and a living example of virtue.

He even worked with those who were his enemy in war saying, “They were doing their job just like I was,” referring to the brutal Japanese combatants he faced.

But Ramsey harbored no animosity. At Hughes Aircraft he became friends with the men who planned Pearl Harbor. “Men were killed by the Japanese,” said Raquel. “His men were treated terrible and he becomes friends with the very men because he forgives. With that kind of a soul, this man is the man that I knew.”

He lived the ideal of continued service by fighting for the rights of those who served alongside him. “They loved him, they respected him, they admired him,” Raquel said. “And that’s the feeling I've had since the time I met him on New Years Eve and had one dance.”