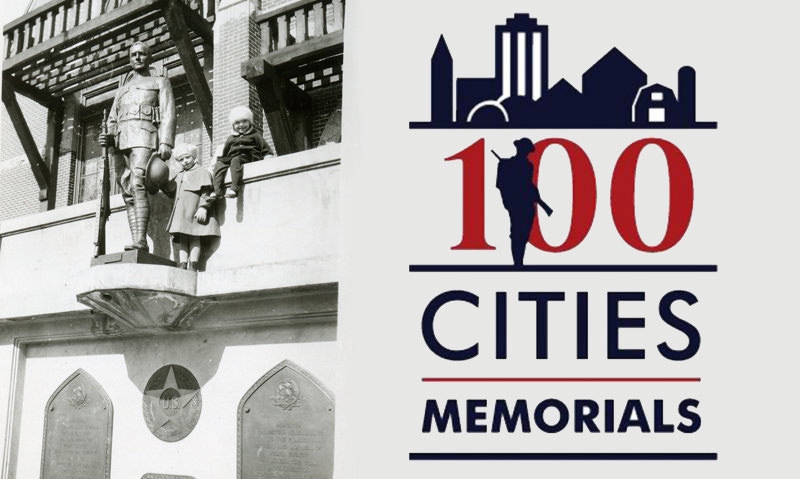 Two girls perch by the World War I doughboy statue on the balcony of American Legion Post 9 in Ogden, Utah, in a 1928 photo. After the building burned in 1949, the statue was moved to the city cemetery, where it fell into disrepair and was vandalized. Baker-Merrill Post 9 and the Weber County Historical Society received a 100 Cities/100 Memorials matching grant to help restore the statue. Photo courtesy Weber State University/Stewart Library

Several American Legion posts will receive matching grants of up to $2,000 each toward the restoration and maintenance of local World War I monuments and memorials.

On Wednesday, the 100 Cities/100 Memorials program announced its first 50 awardees and opened a second round of submissions. The challenge is sponsored by the Pritzker Military Museum & Library in Chicago and the U.S. World War One Centennial Commission, and supported by The American Legion and Veterans of Foreign Wars.

Together, the organizations are elevating 100 World War I memorials nationwide, “one symbolic memorial for every year of the past century,” by bestowing on them the official designation of U.S. World War I Centennial Memorial, said Ken Clarke, Pritzker’s president and CEO. In addition, communities and groups working to restore memorials will receive matching funds to assist in renovation and upkeep: 50 grants now, and another 50 to be announced in the spring.

In a press conference live-streamed online, Clarke read the name of each memorial project selectee. They represent 28 states and are "an important part of remembering our past and preserving our culture,” said Terry Hamby, commissioner for the U.S. World War One Centennial Commission.

• Baldwin World War I Memorial, Baldwin, N.Y., a project of American Legion Post 246 and the people of Baldwin.

• Gold Star Memorial at Guthrie Park, Riverside, Ill., a project of American Legion Post 488 and the Village of Riverside.

• Memorial Tablet at Victory Memorial Grove, Los Angeles, a project of Hollywood Post 43 and the Los Angeles-Eschscholtzia Daughters of the American Revolution Chapter of Southern California.

Valid entries not selected in the first round are automatically entered in the second, which runs through Jan. 15. Grant applications can be submitted here. To be eligible for matching funds, memorial work must be completed by Nov. 11, 2018. The remaining 50 awardees will be announced April 6.

All awardees will receive certificates naming them official centennial memorials, along with bronze medallions suitable for affixing to the memorials.

Marty Conatser, past national commander of The American Legion and adjutant for the Department of Illinois, represented the Legion at the press conference and congratulated the awardees.

“The Legion is proud to support this initiative, and we are gratified that a number of the grant recipients named today are American Legion posts,” Conatser said. “Our founders were the soldiers, Marines and sailors of the Great War, who returned from Europe and made a commitment to take care of each other and their families – and beyond that, to continue serving their country with their time, talents and hearts. Even now, nearly 100 years after they first convened in Paris, we remain inspired by their love of country and unswerving devotion to American principles and ideals.

“Every World War I memorial and monument restoration project – not just today’s awardees, but every single one happening in every state – is a worthy endeavor, indicating that we haven’t forgotten this critical moment in American history.”

The 100 Cities/100 Memorials program is intended to assist communities in rehabilitating World War I memorials that have deteriorated due to exposure to the elements, neglect and even vandalism, as well as give all of America an opportunity to participate in the centennial commemoration.

A total of $200,000 has been allocated by Pritzker and the U.S. World War One Centennial Commission for grants to help restore these memorials’ physical beauty and to raise public awareness of the effect of the war on modern society.

At the Mountain View Cemetery in Dillon, Mont., a statue of World War I veteran and former Montana Department Commander George Gosman stood watch for 75 years over hundreds of graves of his fellow doughboys. In 2016, during a violent windstorm, a fallen spruce tree damaged the statue beyond repair.

“We are thrilled to have been selected for a grant,” said Dale McKnight, senior vice commander of Post 20 in Dillon. “Our little community has been so supportive of our efforts to put a suitable replacement memorial in our cemetery. Even so, at this point, we are still several thousand dollars short of being able to fully fund the replacement design that the American Legion and VFW posts are looking at right now. Money from the 100 Cities/100 Memorial program will go a long way toward filling that gap.”

In Burlington City, N.J., the “Rock of the Marne” is the county’s only doughboy monument honoring those fought in the Great War. Made of cast bronze, it sits on a granite pedestal with a bronze plaque commemorating Burlington City soldiers killed in action. Restoration work is scheduled for 2018 and will include repair, cleaning, waxing and development of a yearly maintenance plan.

“We are fortunate to have a such a unique memorial in Burlington and wish to ensure that it stands for many years to come,” said Frank Caruso, commander of SAL Squadron 79 in Burlington City. “However, we believe this is the first undertaking to conserve the monument since its dedication in 1923. The grant will help us achieve our goal of honoring veterans everywhere, not just in the immediate area.”

"We certainly do not think or frame it in terms of winners and losers," he said. "These projects are not trivial undertakings. Everyone who puts forth effort on behalf of our doughboys deserves thanks, praise and recognition."

Mayer anticipates the second round of entries will be just as deserving of attention.

"Our hopes and aspirations for the program bore out. Though the grants are not huge, 100 Cities/100 Memorials acted as a catalyst for awareness, action by communities and veterans service organizations, and statewide reviews and funding for memorial recognition and restoration by other organizations. We could not be happier."