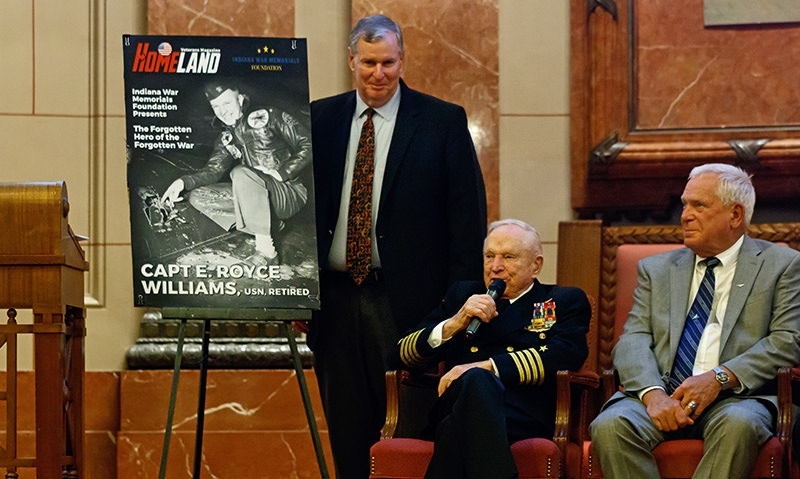 James Graham served as a Navy pilot but was unaware of arguably the most significant feat in naval aviation history until 65 years after it occurred.

On Nov. 18, 1952, Navy pilot Royce Williams shot down four Russian MiGs during a single encounter, landed his bullet-riddled plane safely on USS Oriskany and then was ordered to keep it a secret. More than 50 years later, after Russia identified the downed pilots, details slowly emerged. Recently, the U.S. government declassified official reports, confirming the details.

Graham, a member of American Legion Post 331 in Brownsburg, Ind., first learned of Williams and his heroics in an exclusive interview in American Legion Magazine, the first time the story was reported nationally.

In fact, Graham flew the same type of plane – a Panther – that Williams piloted during his unique 35-minute dogfight during the Korean War. “I just can’t imagine that airplane coming up against even one MiG and winning. That’s like entering your personal car in the Indy 500 and winning. It’s really unlikely. I’m just really amazed that he survived.”

Graham, who joined the Navy in 1951 and later transferred to the Army National Guard before retiring in 1979, knew several people who were aboard Oriskany when Williams performed his feat.

Upon learning the details, Graham served as the catalyst for bringing Williams, who lives in San Diego, to Indianapolis to share his story. The two Korean War pilots met and shared their experiences. “It’s just a miracle that he was able to pull this off,” Graham said.

Greg Ballard, the mayor of Indianapolis and a Gulf War era Marine veteran, welcomed the crowd. “We’re in a building that was dedicated to the men who fought in the war to end all wars,” he said. “But tonight we honor a man who fought in the ‘Forgotten War.’ Heroes like Royce Williams must never be forgotten.”

“His story was secret for a long time,” Machado said. “It’s about time we honor our forgotten heroes. Not much is known about the ‘Forgotten War,’ the Korean War, so that’s why we decided to do the film.”

Williams, 93, mingled with attendees, signed autographs and participated in a panel discussion. He recapped his experience, which also included landing his plane, minus its hydraulic system, on the carrier at roughly 200 mph – almost double the usual speed.

“I slowed it down as best as I could. But it was like being in a blizzard with heavy winds,” he recalls, noting that the captain made an important last-minute maneuver to help the landing. “I couldn’t line it up … I didn’t think I would land on the ship.”

Once aboard the ship, Williams was told not to share what happened with anyone.

“There were NSA (National Security Agency) agents on board, and we didn’t want anyone to know,” he said, referring to the then-secret agency. “The information from radar and radio that they collected clearly showed those were Russian planes. Had this gotten out, it would have threatened World War III.”

Former Navy pilot Peter-Rolf Ohnstad, who traveled to Indianapolis with Williams and Machado, was awed by the turnout for the event.

Ohnstad and Williams are members of American Legion Post 416 in Encinitas, Calif. Along with Machado, they take these infrequent but educational trips. Their next appearance is scheduled to be at the Tailhook Association reunion in September.

“Last year we went to South Dakota and Minnesota, where he was honored in his hometown,” Ohnstad said. “Since no one knew about (the MiGs being shot down), we’re left to wonder: What would we have done if it had turned out otherwise, if we had lost four planes? What was our contingency plan? Nobody talks about that.”

Noting that the memorial, which includes a museum, serves as an educational tool, Goodwin closed by talking about the importance of sharing stories like that of Williams.

“We need to tell our youth about people like Capt. Williams,” he said. “We need to tell people about those folks who put their lives on the line, leave their families and put themselves in harm’s way to ensure all of us are free. We don’t live in freedom today because it just happened. It happened because of people like him and everyone who wore the cloth of our nation.”