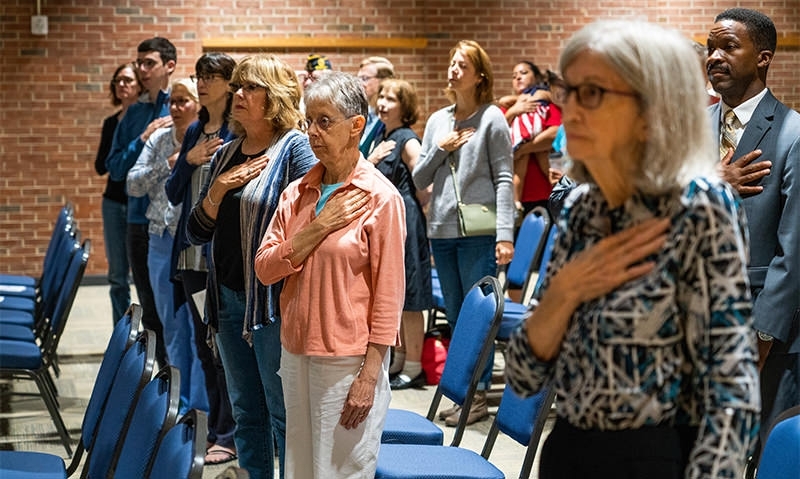 Gerry Connolly recalls the Tuesday morning of Sept. 11, 2001, as “one of the most beautiful September days I remember.”

In the Washington metro area and New York City, the weather that morning was warm and the skies were a picturesque blue. News that a plane had hit the World Trade Center diverted our attention, recalled Connolly, a member of Congress whose district includes Vienna, Va.

“It took a while for us to accept that it was deliberate,” Connolly said during a 9/11 remembrance event led by American Legion Dyer-Gunnell Post 180 at the Vienna Community Center. “Of course, by the time the second airplane hit the second tower our confusion was cleared up. And our perfect day, which was made by God, turned into a day of horror made by man.”

Connolly recalled not only the horror of that day but the heroes. The military members, police officers, firefighters and other first-responders who rushed toward and into the crumbling twin towers and the Pentagon, which was hit by a third airplane later that morning. “They rushed in the opposite direction of everybody else, knowing the risk they took,” he said. “And in that horror, that human heroism has stuck with all of us.”

In Vienna and throughout America on Sept. 11, patriots paused to remember those who lost their lives on the 17th anniversary of the terrorist attacks. Post 180 Commander Jason Feimster, a post-9/11 Marine Corps veteran, presided over the ceremony, which was attended by about 60 fellow veterans, police officers, community members and others.

Feimster noted that terrorists “robbed America of more than 3,000 lives. Quite simply, Sept. 11, 2001, wounded our nation in a way that we have not known since the shock of Pearl Harbor, bringing down the World Trade Center, damaging the Pentagon and downing an airliner in a Pennsylvania field, the day ranks as the most devastating in our nation’s history.”

He worried aloud about whether time has diminished the memories of that day.

“We vowed that we will not forget — but have we?” Feimster asked. “Domestic issues and the war in Afghanistan have our attention — and for good reason. But I fear that Sept. 11 is fading in our memories.”

That’s exactly why Post 180 has led the community’s 9/11 remembrance ceremony on each anniversary since the tragedy occurred.

“We thought that it was imperative that America never forget about the suffering of 9/11 and what we need to do to strengthen our country,” said American Legion Past National Commander Dan Dellinger, a member of Post 180. “We made the commitment to do this forever.”

Dellinger noted the event is one way that the Legion post adheres to the mission.

“We have to live up to the four cardinal principles — the four pillars — and this is one of the best ways we know to fulfill those,” he said. “It’s great working with the town. We do a lot of things together. We try to promote patriotism however we can.”

Vienna Mayor Laurie DiRocco read a proclamation saying, in part, “The 9/11 attacks thrust the United States and other countries into a war it never envisioned, militarily or diplomatically,” she read. “One way America can fight back by reminding the world that the deaths of these people will always be remembered and they will be forever loved.”

Snodgrass also paid tribute to those continuing to serve, acknowledging attacks have been prevented and lives have been saved since 9/11.