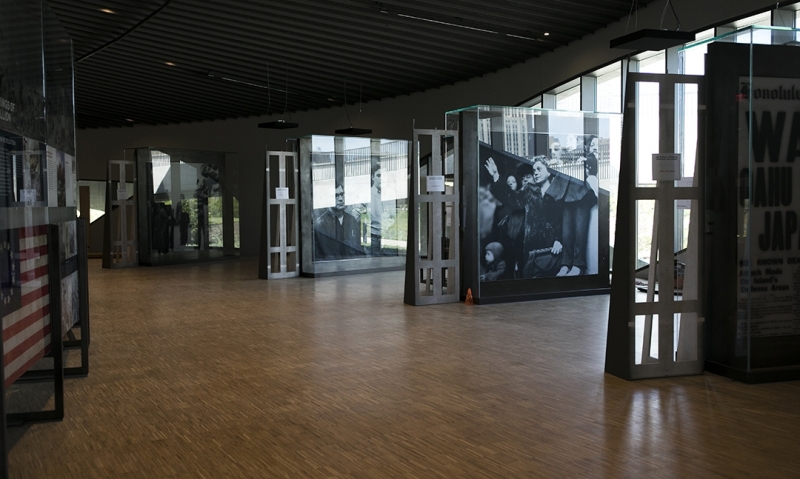 The National Veterans Memorial and Museum in Columbus, Ohio.

Ret. Col. Thomas Moe has been involved with the National Veterans Memorial and Museum in Columbus, Ohio, well before ground was broken in 2015. Moe has carried the museum’s message nationwide, including speaking at The American Legion’s 99th annual National Convention in Reno, Nev.

Moe, a member of The American Legion, served 30 years, mainly as a fighter pilot in the Air Force, after a three-year stint in the Naval Reserve and the Seabees.

On Oct. 27, the 50,000-square-foot museum officially opens in downtown Columbus. In advance of the grand opening, Moe spoke with The American Legion about the museum and its role in telling the stories of America’s veterans, servicemembers and their families.

TAL: Tell me about your role for the museum these past few years.

Moe: The museum hired me as a spokesman so I’ve traveled around. As spokesman, I pass the word, and listen also. I can't stress that enough that when I'm out speaking to people, whether it's formally, like I did in Reno or informally, I'm listening and taking notes and passing those on. What museum visitors will see is a huge result of listening. How do people want to know what a veteran is and what we have done? Of course, a big part of that story are the veteran service organizations, very, very critical, and frankly, the VA. The VA is part of the story as well. I've worked to spread the word, to listen and to work with organizations such as The American Legion, of which I’m proudly a member, to make this the best that it can possibly be.

TAL: How did the National Veterans Museum evolve?

Moe: The idea germinated from an original idea that Ohio should have a veterans museum. A board was formed and the most prominent member on the veterans committee was John Glenn. He asked the question, “How does our museum interface or how do we work along with the National Veterans Museum? Or is there one?" Of course, the answer was no, there is no such an animal. Then we decided to make that our goal. It reached out from beyond there, from beyond Ohio, talking to people in Ohio, to reaching out across the country. That's where I played a big role because I was the traveling person.

TAL: What message do you convey when you speak about the museum?

Moe: We're not just telling the story of veterans who were presidents or senators or governors. Most of the veterans are good people who work at everyday jobs and then help each other, especially through the VSOs (veteran service organizations). One of my favorite photos that I’ve shown is a picture taken in the boondocks of Nebraska. It’s a buggy, a buckboard, actually being pulled by a horse or two. There's a flag-draped coffin in the back and there are two veterans following it with flags. We're telling that story as well because it's how we serve each other that's part of the veterans' story to take our loyalty to our country, our loyalty to our brothers and sisters, and to help them.

TAL: That photograph was by an American Legion staff photographer and appeared on the cover of our May 2017 magazine.

Moe: Lonely, but not forgotten if you know what I'm saying. It tells so much of what we do. How many times have we stood and buried some of our mates? Maybe a handful, maybe it's 50, maybe it's a hundred of our brothers and sisters, in the rain. We go back, rain or shine, night or day, back to our homes and go back to our jobs, but we don't forget.

TAL: Remembering the fallen is a common bond among veterans everywhere.

Moe: One of the stories I tell in that regard, in Reno and elsewhere, was about one of my colleagues. He was a member of the National Guard and was killed in Afghanistan. The governor sent me to Delaware to retrieve his body and the two others who were killed with him in a bomb blast. We landed in a huge rainstorm, one of the heaviest rainstorms I've ever seen. Not only was the governor standing, getting soaking wet and proud of it, but there were hundreds of veterans on bikes filling the area in front of the airplane. We unloaded the three coffins into three hearses and those bikers, guys and gals, veterans all, followed each of the coffins to the respective funeral homes. To me, this is my image of the U.S. veteran — we never forget each other. This is the message we preached, then afterward we listened and now we've arrived with what we have today in Columbus. It's just the beginning really.

TAL: What is the overall mission of the museum?

Moe: We want to honor. We want to connect civilians with veterans. We want to inspire people. When they leave, they feel wow. We want to educate, educate people of all ages, but especially young people. Let them know what the story really is of our veterans, our servicemen and women. Of course, part of the honor is we are memorializing those who didn't survive to be veterans, to enjoy the fruits of their service. Honor, connect, inspire and educate — those are the four key points.

TAL: When the museum opens there will certainly be veterans, but there will also be non-veterans who visit. What do you want them to feel or learn as they're going through the museum and afterward when they've completed their stay at the museum?

Moe: That's a great question because we've projected the story at the museum to hit who we believe are all the key audiences, of course, veterans and veterans' families. Their moms, dads, brothers, uncles, sisters, cousins, kids, but also very, very important is the non-veteran. We take them through the story. Service, training, death, the folks who didn't come home, the folks who did come home, and then retirement. In that period there's training, whether it's a pilot or a plumber or a rifleman. That is one of the most important messages that we have is to the person with very little, if any, contact with military people, military service, because that's your average citizen today.

TAL: Looking back over all the time you've spent working on this project, what will be going through your mind at the grand opening? And what do you think John Glenn would think about the museum?

Moe: That's also a very good question. I can imagine that what I'm thinking is the same thing that Sen. Glenn would be thinking, and that is not only a huge sense of satisfaction that so many people came together and are still coming together in support of a museum that we have produced a world-class facility, which is what our veterans deserve.

The American Legion Magazine featured an article about the National Veterans Memorial and Museum. Read it here.