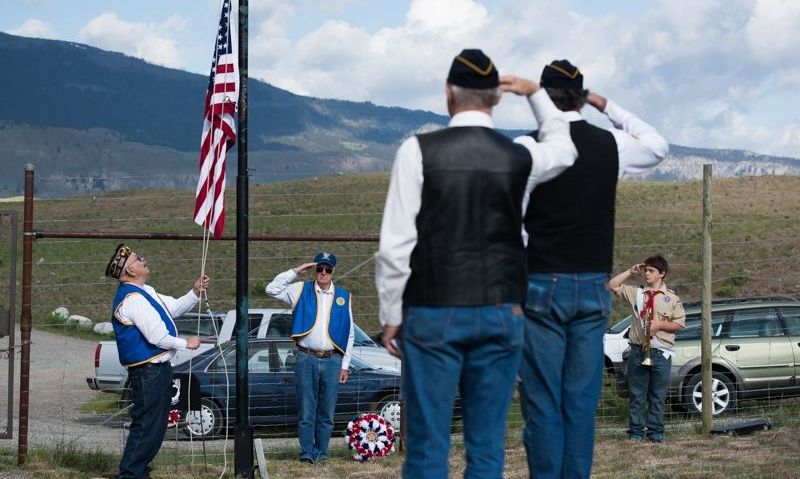 As the nation remembers those members of the military no longer with us this weekend, American Legion Family members across the nation are stepping up to lead Memorial Day observances in their communities, towns and cities. The events include parades, ceremonies and the placing of U.S. flags on veterans’ graves – along with a few less-traditional events.

In the nation’s capital, American Legion National Vice Commander Paul I. Spedaliere is laying a wreath at the Tomb of the Unknown as part of the Memorial Day ceremony at Arlington National Cemetery. The annual ceremony is attended by thousands and is sponsored by the U.S. Army Military District of Washington.

In New York, members of Post 1941 in Port Jefferson and thousands of volunteers, including Boy Scouts, will place approximately 270,000 flags on veterans’ graves at Calverton National Cemetery on May 25. It’s the 25th year Post 1941 members have placed flags at the cemetery for Memorial Day. The event starts at 9 a.m., with a ceremony at 11 a.m.

On Memorial Day in Milltown, N.J., Post 25 will begin Memorial Day services at 9 a.m. in front of the post at Veterans Memorial Park. At 1 p.m., they’ll conduct their eighth annual Hometown Hero program, honoring 20 local men and women who have served, with banners for each of the heroes being placed on street poles in town after the program.

And in Georgia, American Legion Riders of Post 233 in Loganville will conduct their 21st annual Ride for America on Memorial Day. Nearly 1,000 motorcyclists are expected to participate in the ride which raises money for The American Legion Legacy Fund to help children of fallen and disabled post-9/11 veterans receive a higher education. Donations raised also go to support post programs. Retired U.S. Army Lt. Gen. R. Steven Whitcomb will serve as the grand marshall of the police escorted ride that leaves Post 233 at 9:30 a.m. and travels 38 miles through small towns before arriving in Madison for a Memorial Day ceremony and then back to the post for food and raffle prizes.

The following are just a few examples of what American Legion posts will be doing leading up to and on Memorial Day. We ask that you share photos and stories of your Memorial Day events at www.legiontown.org.

American Legion Post 96 in Surprise will lay a wreath at the annual memorial ceremony May 25 at the World War II monument in Surprise. Post 96 Commander Mike Elliott will be guest speaker. And on Memorial Day, American Legion Posts 96, 62 and 94 will take part in the North West Valley Veterans Association’s Memorial Day Ceremony at Sunland Memorial Park in Sun City. The ceremony includes a Falcon Warbirds flyover with vintage aircraft, American Legion Riders from Chapters 96 and 62, and a procession of organizational flags.

• On May 24, American Legion Post 191 in Kingsburg will meet with local junior high students to drive stakes into the head of veterans’ graves in the area. The following morning the post gathers volunteers to place a flag and a cross with a poppy on each grave; last year nearly 1,300 graves were decorated. The post’s American Legion Family will also take part in the Memorial Day ceremony that will honor Gold Star mothers, feature a reading of “In Flanders Field” and a high school presentation on how patriotism is viewed by the student body. Following the ceremony the post serves punch and cookies.

• Post 233 in Elk Grove is hosting The American Legion Walk for Veterans on Memorial Day.

Gainesville’s 17th Memorial Day parade is doubling as a celebration of the 100th anniversary of Paul E. Bolding American Legion Post 7. The parade, organized by Post 7 Commander Dave Dellinger, will be led by members of the post. There are approximately 54 groups comprised of more than 1,000 individuals participating in the parade

American Legion Post 264 in Lake Forest will be decorating veterans’ graves at local cemeteries and also will conduct its annual Memorial Day ceremony in Market Square. A senior U.S. Navy officer from Naval Station Great Lakes will be the main speaker, and the Lake Forest High School band, local Scouts and members of American Legion Post 264 will take part in the ceremony. After the ceremony, the post's color guard and rifle squad will hold military honors at St. Mary's Cemetery, Lake Forest Cemetery and St. Patrick's Cemetery.

Chester L. Briggs Post 47 in Houlton is hosting several Memorial Day-related events, including a ceremony and wreath laying at Soldiers’ Hill in the Evergreen Cemetery, a parade and a memorial service.

Patrick Leo Hanlon Post 55 in Albion already has placed flags on the graves of veterans in two major cemeteries. The posts also coordinates, hosts and presents the Albion Memorial Day Parade every year.

American Legion Family members from St. Joseph Post 328 have a series of activities planned for Memorial Day, including a march to a 9 a.m. service at St. Joseph Catholic Church and a memorial service at St. Joseph Cemetery. The post will serve refreshments following the service, and later in the day post members and the post’s honor guard will attend ceremonies at St. John’s Abbey cemetery and Yankee Cemetery.

American Legion Post 1 in Laconia is teaming up with other local organizations to sponsor a Field of Flags display on the lawns of the Congregational Church and around the flag pole in Veterans Square. The display will be up all weekend and will consist of 3,936 flags representing the names of fallen heroes listed on veterans’ memorials in the downtown area. There also will be a flag dedication ceremony on May 26 and a parade on May 27.

• Legion Family in Atlantic County will stage their annual Memorial Day program at 2 p.m. Friday at the Estell Manor cemetery. The annual parade will start at 11 a.m. Monday at Dawes Avenue School in Somers Point.

• Post 120 in Lambertville is the starting point for a joint Legion-VFW-city Memorial Day parade beginning at 8:30 a.m.

• Post 129 in Toms River will have a Memorial Day parade beginning at 9 a.m.

• Post 72 in Brooklawn will hold a Memorial Day service beginning at 10 a.m.

• Legion Family members in Morris County will participate in a Memorial Day ceremony at the All Veterans Memorial in Budd Lake beginning at 10:30 a.m.

• Post 469 in Longport plans and coordinates the town’s Memorial Day parade, ceremony and hot dog picnic, with events beginning at 11 a.m. with the parade, which starts at 33rd and Atlantic Avenues.

Post 436 in Angier is placing flags on veterans’ graves on May 25.

American Legion Post 153 in Wagoner is conducting a Memorial Day service at the Wagoner County Courthouse that will include a wreath-laying ceremony, a performance by high school vocalists, words from various community leaders and an address by Post 153 Commander Art Corrales. Post 153 members also are spending the days leading up to Memorial Day teaming up with community members to mark veterans’ graves with U.S. flags at Elmwood and Pioneer cemeteries. And on Saturday, Auxiliary Unit 153 members will be at the Wagoner Walmart from 9 a.m. to 5 p.m. to sell lapel poppies.

American Legion Liberty Post 308 in Willow Grove is placing flags on veterans’ graves May 25 at five local cemeteries. On May 26 the post’s honor guard and American Legion Riders attend church services, and then the post hosts a ceremony and pig roast in the afternoon.

Hilton Stone Post 279 in Woodbury is supervising Boy Scout Troop 1180 as it places 144 U.S. flags around the veterans memorial on Courthouse Square.

• In Springfield, American Legion Post 176 and Veterans of Foreign Wars Post 7327 will combine for their annual Memorial Day ceremony honoring Gold Star families and those who gave the ultimate sacrifice.

• Members of William C. Stacey Post 206 in Seattle will be volunteering at and participating in a Memorial 5K run on Saturday as part of the University of Washington's weeklong events commemorating Memorial Day.

• Post 54 members in Chewelah will conduct nine remembrance ceremonies at different cemeteries on the morning of Memorial Day. It has been an annual tradition spanning back decades.

Tyler County Unit/Post 48 in Middlebourne will place flags on nearly 1,000 graves and honor seven young men from the area who were killed in action in Vietnam. Gold Star flags will be presented to their families, and a parade that finishes with a horse drawn wagon carrying a flag draped coffin with the riderless horse following also will take place.

• American Legion Post 165 in Two Rivers is honoring veterans by flags on graves, and conducting a parade and ceremony.

• Triple Nickel Post 555 in Sheboygan is placing flags at one of the local cemeteries and taking part in the City of Sheboygan Memorial Day Parade.