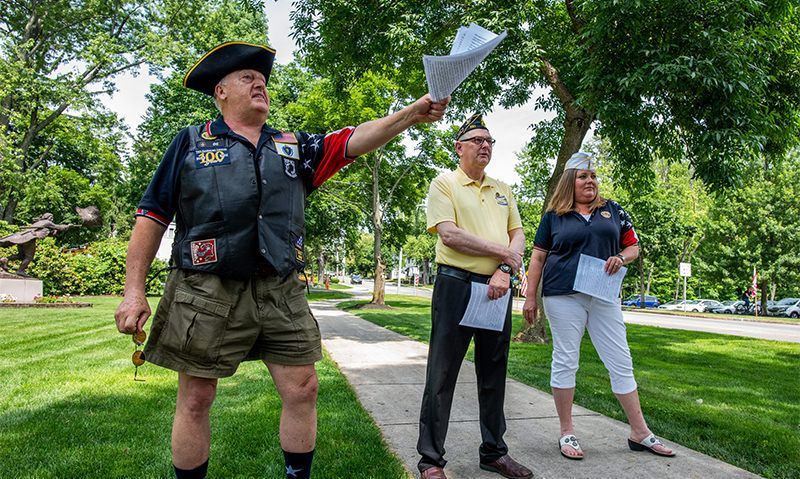 Just a few miles from one of the Revolutionary War’s flashpoints, American Legion Family members held a special July Fourth ceremony on Thursday. John O’Connor, commander of Post 221 in Bedford, Mass., resurrected the ceremony three years ago that includes a re-reading of the Declaration of Independence in the town’s Veterans Memorial Park.

O’Connor outlined a brief history lesson from the 1770s before he shared duties of reading the 1,458-word declaration, along with Post 221 member John Cooper and Department of Massachusetts Vice Commander Sandra Kee.

“It all started here,” said O’Connor, sporting a Legion Riders vest and American flag socks. “It’s a small part of our heritage.”

Bedford is just a few miles from Lexington and Concord. And, not too far away are the sites of the Boston Massacre and Boston Tea Party, which fanned the flames of revolution.

“Something caused everybody to get into an uproar,” he said. “We are in the midst of all of that. The roots that are here are the beginning of the United States.”

O’Connor restarted the Independence Day program after it was dormant for years following the passing of its originator, John Filios, a retired Air Force lieutenant colonel and community member.

“John’s memory will live on through this,” he said. “As commander of the American Legion Family Post 221, there is nothing more important than to get out the red, white and blue in the community. We support veterans. We want to get out the message of the red, white, and blue and not let that message fade. We need to break it out as veterans and as the American Legion Family post.”

The ceremony was attended by about 40 people, including three Eagle Scouts.

Linda Kovitch, of Bedford, attended the ceremony for the first time. She is currently unable to drive as she is recovering from an injury so she walked over to the event. “Since it is the Fourth of July, I wanted to do something and I enjoyed listening to the Declaration of Independence,” she said. “I can’t remember the last time I heard it read out loud.”

“The fact that this would be publicly read aloud again to refresh our understanding of what the intended message from that document was, is a wonderful thing,” she said. “This is a very important way for us to remember what this holiday really means.”

Kovitch pointed out that today’s veterans have much in common with the early Colonists, including many who gave their lives for America.

“So many gave their lives to start this country for what they believed to be a better way to have a country, as opposed to what the British were trying to do,” she said. “The fact that the Legion is recognizing the important of what the Colonists did on our behalf seems to be a natural progression. They are the people who are most appropriate to show this.”

After the park ceremony, American Legion members returned to the post, about a mile down the street, for a flag retirement ceremony. The post had collected dozens of worn and tattered, large and small, American flags. They were honorably retired in a controlled fire in the back of the post’s parking lot.

O’Connor led the ceremony, which was attended by about three dozen spectators, including Legion Family members, Boy Scouts and others.

“It’s not just a piece of cloth,” he said. “It’s part of America that traces our roots back to the Revolutionary War. This is what we do to make our community more aware.”