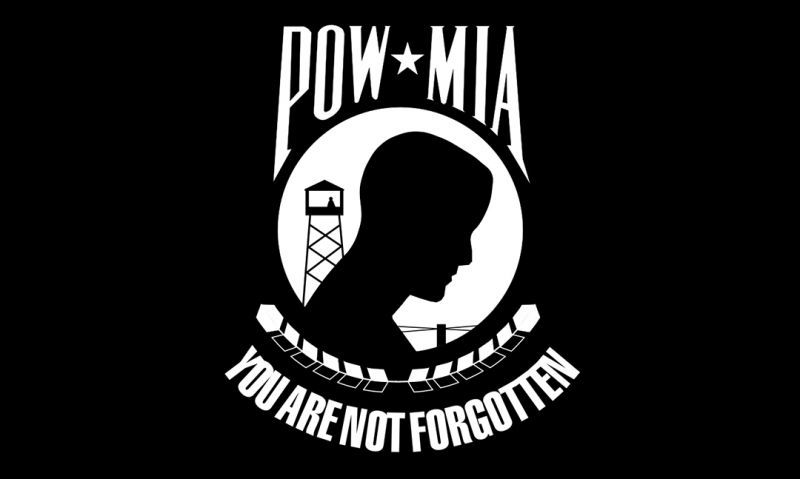 More than 82,000 Americans remain missing from World War II, the Korean War, the Vietnam War, the Cold War, the Gulf War and other conflicts. Friday, Sept. 20, is National POW/MIA Recognition Day, when Americans are asked to pause and reflect on the sacrifices made by the military men and women who are imprisoned or unaccounted for as a result of their military service.

As part of the day of recognition, held each year on the third Friday of September, Americans and businesses should also fly their POW/MIA flags, which commemorate U.S. servicemembers who are recognized prisoners of war (POWs) or are missing in action (MIA).

In observance of the day, rallies and ceremonies are also held throughout the nation to honor those U.S. servicemembers who have yet to return home, and the families they've left behind without closure as to the fate of their loved ones. American Legion Family members are encouraged to share how they observe POW/MIA Recognition Day by posting stories on the Legion's website, www.legiontown.org.

The American Legion remains committed to achieving a full accounting of all U.S. servicemembers from all war eras who are either imprisoned or listed as missing in action. As part of this commitment, the Legion encourages a return of living POWs, repatriation of the remains of the fallen from war zones abroad, or a determination through convincing evidence that neither is possible, as noted in Resolution 22 from the 99th National Convention.

The following is a suggested POW/MIA Remembrance Service to be used at American Legion meetings, banquets, luncheons or memorial gatherings in conjunction with the POW/MIA flag draped over an empty chair. The service can be adopted or modified appropriately. Members should remove their caps during this service.

Those who have served, and those currently serving in the uniformed services of the United States, are ever mindful that the sweetness of enduring peace has always been tainted by the bitterness of personal sacrifice. We are compelled to never forget that while we enjoy our daily pleasures, there are others who have endured and may still be enduring the agonies of pain, deprivation and imprisonment.

Before we begin our activities, we pause to recognize our POWs and MIAs.

We call your attention to this small table which occupies a place of dignity and honor. It is set for one, symbolizing the fact that members of our armed forces are missing from our ranks. They are referred to as POWs and MIAs.

We call them comrades. They are unable to be with their loved ones and families, so we join together to pay humble tribute to them, and to bear witness to their continued absence.

The table is small, symbolizing the frailty of one prisoner, alone against his or her suppressors.

The tablecloth is white, symbolic of the purity of their intentions to respond to their Country’s call to arms.

The single rose in the vase signifies the blood they may have shed in sacrifice to ensure the freedom of our beloved United States of America. This rose also reminds us of the family and friends of our missing comrades who keep faith, while awaiting their return.

The red ribbon on the vase represents an unyielding determination for a proper accounting of our comrades who are not among us.

The glass is inverted, they cannot toast with us at this time.

The chair is empty. They are NOT here. The candle is reminiscent of the light of hope, which lives in our hearts to illuminate their way home, away from their captors, to the open arms of a grateful nation.

The American flag reminds us that many of them may never return - and have paid the supreme sacrifice to insure our freedom.

Let us pray to the Supreme Commander that all of our comrades will soon be back within our ranks.

Let us remember - and never forget their sacrifice.