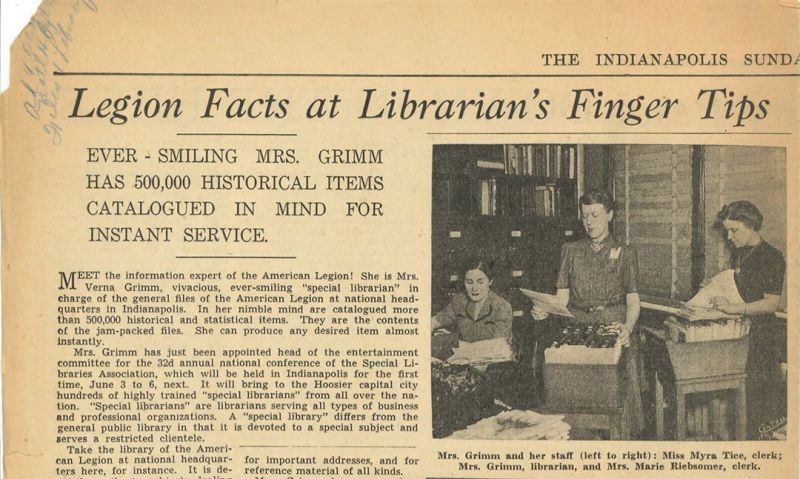 Warren Grimm’s wife continued the family tradition of helping build up The American Legion – but not in Washington state. Instead, she and her child made their way to American Legion National Headquarters in Indianapolis, where she developed the now-famous collection of war posters – during World War II, as they were being released – and more.

The American Legion Library has in its archives a biography of Verna B. Grimm written by her (and Warren’s) grandson, Bruce Landeck. She was born Anna Verna Barstad in Aurelia, Iowa, on Sept. 12, 1892, but grew up in Spokane, Wash. After high school, she attended the University of Washington College of Arts, graduating in 1915. The university is located in Seattle, about 85 miles from Centralia, and after graduating she accepted a job as librarian of the Centralia library. She met Warren Grimm via his sister, a friend of hers. Warren and Verna were married on April 15, 1918, and the next spring she gave birth to their daughter Shirley.

Verna saw her husband shot and killed during the Armistice Day 1919 parade. She attended the trial (and brought little Shirley). The Daily Review of Bisbee, Ariz., reported on March 11, 1920, that she testified on the final day about trying to recover his overcoat from Spokane; she was confident it wouldn’t have bullet holes that might have come from a Legion raid on the Wobblies.

Her next stop was Columbia University in New York City, where she earned a master’s degree in library science in 1923. She then accepted an offer to come with Shirley to Indianapolis to be national librarian at The American Legion’s National Headquarters. She stayed until her retirement in 1957, and in the 34 years between set the foundation for the history the Legion keeps on the fourth floor today. Discussed most often are the war posters. During World War II, according to an American Legion News Service article in 1945, the library was “gathering posters of (war) activities from government agencies, the armed forces, defense plants, civilian defense, shipbuilding, transportation, and countless public and private organizations.”

"Everybody used posters in World War II," Verna said at the time. The collection, which today numbers in the thousands, can be seen at www.legion.org/posters. But she built up more than posters; an emphasis that was going strong in the late 1930s was collecting badges used at department and national conventions. Rarest of all were those with ribbons pinned on delegates to the St. Louis Caucus in 1919.

A 1940 article in an Indianapolis newspaper about the American Legion Library cast Verna as a sort of answer bank for Legionnaires – fielding queries on everything from the flag to George Washington’s law career (or lack thereof). She invoked her husband in describing her work: "That is why I have such a continuous interest in The American Legion …. It is my own Warren's organization. He gave his own blood for it. I feel I am carrying on his own work.”

Soon after her 1957 retirement, Verna fell ill. At the Fall Meetings that November, the NEC sent its condolences; she had also served as secretary of the Resolutions Committee. In fact, Past National Commander Roane Waring offered in seconding the resolution: “There was a time when the question came up as to what the Legion had done at some previous or past convention, or National Executive Committee meeting, and we could go to Mrs. Grimm – and she could put you straight on what the record was. A wonderful woman; she still is, and I certainly hope she has a speedy recovery.”

But Verna died on Feb. 13, 1958, while living with Shirley and her husband in northern Indiana. That fall, the NEC approved a resolution renaming the library’s books the Verna B. Grimm Memorial Book Collection. When the next national librarian, Tom Hull, retired in 1987, Department of South Carolina NECman E. Roy Stone Jr. took the opportunity to also remember Verna: “He took the place of a very fine lady, Verna Grimm …. Verna Grimm is a Centralia Ambassador."