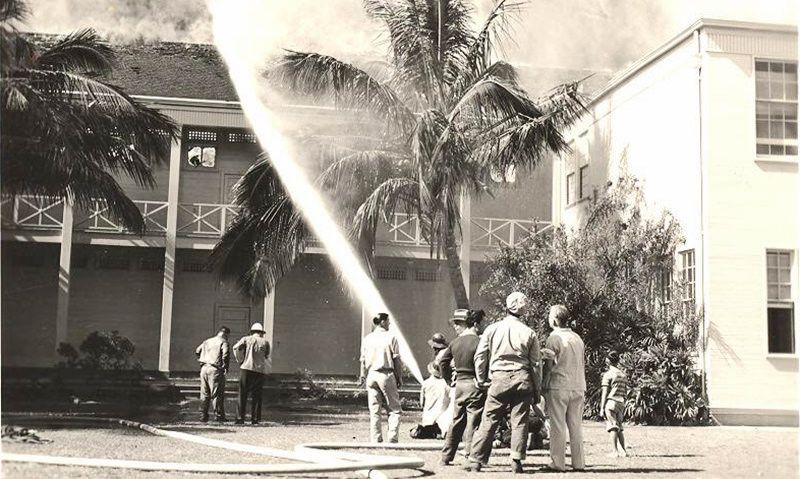 Amidst the chaos of the 1941 attack on Pearl Harbor, Honolulu Legionnaires mobilized and organized civilians to help put out fires, like the one at Lunalilo School. Photo courtesy Hawaii War Records Depository, University of Hawaii at Manoa Library

American Legion Department of Hawaii Vice Commander A.A. Kempa described the confusion, realization, reaction and transformation of Honolulu on Dec. 7, 1941, and in the weeks following the Japanese attack on Pearl Harbor that pushed the United States into World War II. His diary account of the “date which will live in infamy” paints a picture of deadly chaos and The American Legion’s swift response. His account was published in the January 1942 National Legionnaire, a monthly newspaper published and distributed by American Legion National Headquarters.

As with many reflections on the attack, Kempa at first was confused to hear the “rumble of gunfire” on a Sunday morning at 7:30 a.m. “Surely the Navy would not hold target practice near Honolulu without previous warning,” Kempa told his wife. “I sprang out of bed and rushed to the radio. Sure enough, it was war! The announcer kept shouting in a nervous, breathless voice, ‘Pearl Harbor is being bombed. This is war, no fooling – this is not maneuvers – it is the real McCoy.’”

The radio broadcaster soon called on all American Legion members to immediately assemble at the local post.

Kempa drove through the turmoil in Honolulu to the post where he helped organize a team of about 40 members to fight fires, which were on the move due to wind, throughout the city. “We jumped upon the running boards of several cars, and some ran to the school, others to the corner of King and McCully, where the stores were burning rapidly,” wrote Kemba, who was soon assigned as an aide to the coordinator of civil defense.

A team of no less than six Legionnaires was at work 24 hours a day for the next 10 days after the attack. “We had many strange duties to perform, ranging from orderly, standing long hours at the coordinator’s door to taking care of panicky men and women,” Kempa explained.

Kempa said his 17-year-old son Bob “joined a group of high school boys as ambulance drivers. He was on duty for 48 hours without rest. These boys have guts and endurance when under stress and can take it. Bob served with this group all week and after that joined a gang of laborers at Wheeler Field.”

The attack and its destruction galvanized the community, he wrote. “There is a determination that this shall never happen again to us – for we shall give our all to prevent it. The public morale is the finest I have ever seen in a like crisis. Everybody wants to serve and help the other fellow – help defend our land – help to relieve the homeless and suffering – sharing to the limit with the evacuees. Hundreds of homes have been opened to the evacuees. The city is organized for total defense. And I am sure our armed forces are ready for any eventuality.”

Kempa noted that schools were closed, and all services – fuel, banking, courts, jails, law enforcement, medicine – all “suddenly changed from the ordinary routine of peace to that of total defense.” Important public buildings were sandbagged for protection, bomb shelters were dug, and alcohol was banned. “Food, gas, auto parts, radios, flashlights, firearms and various defense materials are rationed and controlled.”

The vice commander concluded his article with a message titled “No More False Security.”

“We have now entered a new era of life. We need to be shocked out of our lethargic way. From now on, we must roll up our sleeves and stand together – to work and fight for the complete annihilation of this hellish totalitarianism and for a better world. The masses of America must be awakened now. The 200,000 civilians and the thousands of our forces who watched the scene I have described – yes, the thousands of dead who fought off the attackers or died without a chance under the most hellish circumstances ever inflicted upon American soil – all, I am certain, raise up their voices and cry out to you, ‘Wake up, America!’”

Kempa’s account appeared on Page 5 of the publication, which otherwise focused on the Legion’s role in civil defense, the Selective Service, assembling a work force for the war effort, promoting sales of defense bonds and securing the west coast.