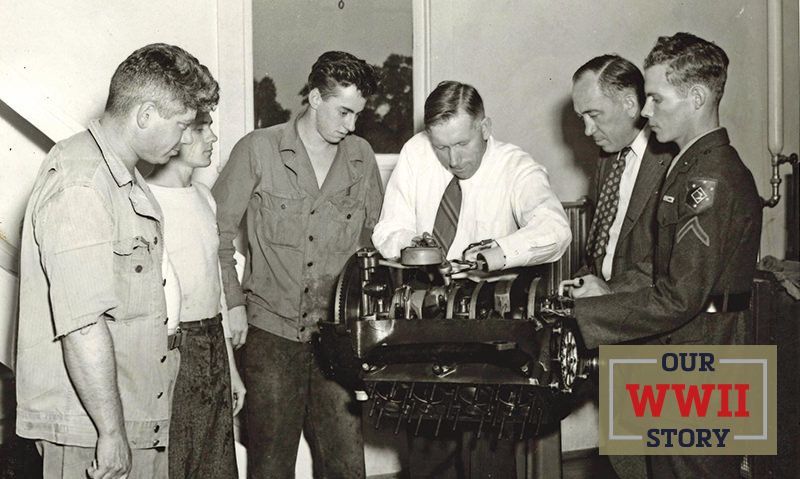 Young veterans gather around a motor at Camp Legion to learn from World War I double amputee Charley McGonegal how to do mechanical work, even with prosthetic limbs. McGonegal was a New York Legionnaire who traveled with four others around the country to inspire and teach newly disabled World War II veterans. (American Legion Archives)

By October 1944, Camp Legion at the Ford Motor Co. had trained and employed more than 11,300 World War II-disabled veterans.

The 500-acre facility in Michigan specialized in fostering civilian career opportunities for veterans who had lost limbs in the war, as well as others who came home with combat disabilities. Veterans were housed and fed at Camp Legion, paid a $3-per-day scholarship each, “growing strong, preparing themselves for more skilled jobs (until they are) mentally, physically and skillfully ready to take a job,” according to the camp’s promotional materials of the time.

Automobile-manufacturing pioneer Henry Ford, who converted much of his company’s production capacity to build planes and vehicles for the war effort, had started Camp Legion in 1938 as a training operation for boys age 17-19, many of whom were the children of disabled or dead World War I veterans. The boys were taught farming, mechanics, management and sales skills. They were paid $2 per day for their work and received training that would help them support themselves and their families in the twilight of the Great Depression.

As disabled veterans began coming home to limited opportunities in 1944, Ford converted Camp Legion into a massive program to specifically help them. The training school for boys remained in place during those years – 1944 and 1945 – and the program returned to primarily serving teens again in 1946, functioning in that capacity until 1952. It is unclear exactly when or why the training program was named Camp Legion, but American Legion support and involvement were widely publicized when the facility shifted to focus on returning veterans. The name “Camp Legion” appeared on buildings in the late 1930s.

“Mr. Ford has been a pioneer in bettering the condition of American workers,” American Legion Past National Commander John R. Quinn said during the medal presentation. “He has been particularly interested in workers who are veterans and disabled. Because of that interest, he has been an ardent supporter and friend of The American Legion and its program for the welfare of the war-disabled."

“Rehabilitation is not something to be taken for granted until the signing of the last armistice, as you men well know,” Henry Ford II told Legionnaires gathered for the 1944 National Convention in Chicago. “It must not wait until the peace has been declared and all of the hundreds of thousands of boys have returned to their hometowns. Rehabilitation must begin now. Rehabilitation must mean helping the lone man who may return to Main Street ahead of his comrades and is just as desperately in need of guidance as the thousands who have yet to come … Rehabilitation must be gradual to fit the man easily back into a normal life, preserve his self-respect and independence.”