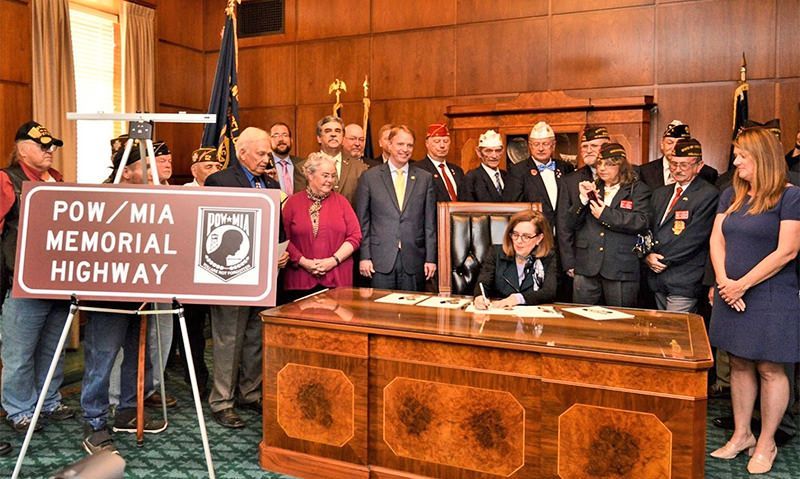 Oregon veterans dedicated the nation’s first border-to-border POW/MIA Memorial Highway in a series of ceremonies across the state on Sept. 18, National POW/MIA Recognition Day. The designation of U.S. Highway 26 honors 920 Oregon prisoners of war, including 135 civilians, 999 Oregon military veterans and one civilian listed as missing in action, said Dick Tobiason, chairman of the Bend Heroes Foundation, which spearheaded the highway dedication.

Legionnaires, including Past National Commander Charles Schmidt, organized four of the six ceremonies and raised money to help pay for 10 signs that are being posted along U.S. Highway 26 between Seaside and Vale. “The American Legion remains steadfast in supporting our nation’s goal of achieving the fullest possible accounting for all U.S. military personnel and designated civilian personnel missing and unaccounted for from our nation’s past conflicts and current and present wars,” Schmidt said at ceremonies in Vale and John Day. “This means returning living POWs, repatriating remains of those killed in action or who died in captivity or providing convincing evidence why neither of these is possible. The American Legion will not rest until that mission is fulfilled.”

Schmidt led an American Legion contingent to the Far East during his time as national commander from 2016 to 2017, meeting with the Defense POW/MIA Accounting Agency Team in Hanoi, Vietnam, and military leaders in Seoul, South Korea, regarding the recovery of missing U.S. servicemembers’ remains. Schmidt also visited the Hoa Lo Prison – infamously known as the Hanoi Hilton – where several U.S. servicemembers were held during the Vietnam War. “Leaving the prison, my respect for our U.S. servicemembers was amplified for their courage, perseverance, loyalty to their country and their faith that they would not be forgotten,” Schmidt said.

He also recounted the story of Air Force Col. George “Bud” Day, a World War II, Korea and Vietnam War veteran who broke his arm in three places and sprained his left knee while ejecting from his F-100 over North Vietnam in August 1967. Day was taken prisoner, interrogated and tortured before he escaped. He was wounded and recaptured by a Viet Cong patrol after surviving in the jungle for nearly two weeks. Day received the Medal of Honor in 1976.

Tobiason and The Bend Heroes Foundation led efforts to persuade the Oregon Legislature to designate the POW/MIA Memorial during its 2019 session. Tobiason is a member of Stevens Chute American Legion Post 4 in Bend and was the 2013-14 Oregon Legionnaire of the Year.

Seven other states have dedicated POW/MIA memorial highways, including Colorado, Delaware, Florida, Montana, New York, Washington and Wisconsin. None extends border-to-border, Tobiason said. Idaho plans to designate the 401 miles of Highway 26 within its borders as a POW/MIA Memorial Highway next legislative session, he added.

Tobiason and the late Bob Maxwell put Oregon veterans on the map in 2018 with the dedication of the state’s Medal of Honor Highway – the longest in the United States. Because of their efforts, the Oregon Legislature designated the 451-mile stretch of U.S. Highway 20 from Newport, Ore., east to the Idaho border as a tribute to the state’s current and future Medal of Honor recipients. The ultimate aim is for other states to follow their lead until Highway 20 is America’s Medal of Honor Highway from coast to coast.

Friday’s dedication of the POW/MIA Highway comes as the family of Korean War veteran Norvin D. Brockett anticipates the return of his remains. Members of his family attended the highway dedication ceremony in Redmond. Brockett, who was from the Bend area, was reported missing in action after his unit was attacked by enemy forces near the Chosin Reservoir on Dec. 6, 1950. DoD confirmed the location and identification of his remains in August 2019.