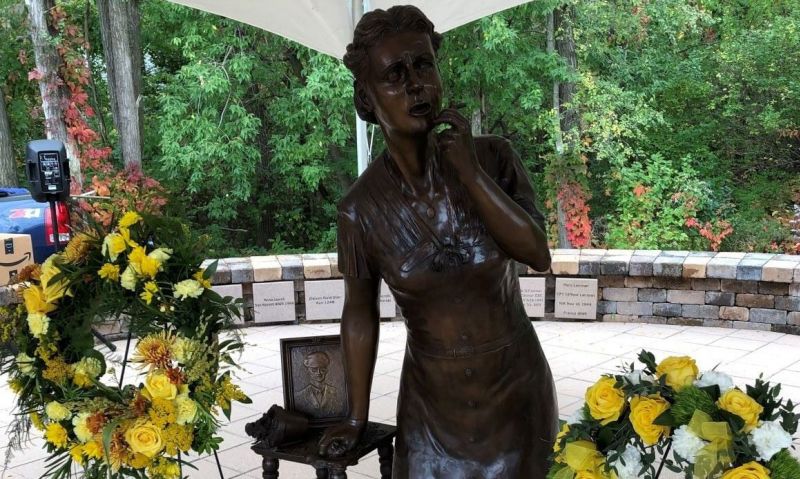 Gold Star Mother’s Day this year unveiled a long-awaited moment for a Wisconsin community and mothers who have endured the loss of their fallen son or daughter.

Roy L. Drew American Legion Post 492 dedicated the nation’s fourth-only, and the state of Wisconsin’s first, Gold Star Mothers statue Sept. 27 at Veterans Memorial Park in Rothschild before a crowd of nearly 300. The life-size bronze statue shows the long stare and tears a mother has the moment she receives the dreaded Western Union telegram with news about her son or daughter who paid the ultimate sacrifice in military service.

“Those that the fallen have left behind, Gold Star Mothers, have the greatest burden of all … they must live day in and day out with the loss of their beloved child,” said Paul Gwidt, commander of Post 492. “That picture of their child’s first day of school still hangs in the hallway. The picture with their new friends at basic training or boot camp, maybe even a picture of the ship, airfield or base where they were stationed, sits on the end table. Their child’s bed may even still be made, waiting for when they come home. (The Gold Star Mothers statue) is not a place of sadness. It is a place of remembrance, a place of peace and most of all a place to remember that you are not alone.”

About 300 community members, Gold Star families and Legion Family members attended the dedication where “the human connection on that day was remarkable,” Gwidt said. Lauri, a Gold Star mom, was there “to observe the death of her son 10 years to the day he was killed in Iraq. A young veteran with Patriots for Warriors named Jason Housley took her under his wing like a guardian angel for the day. Just plain remarkable that connection was made by two people that did not know each other just hours before.”

Also in attendance for the ceremony was Post 492 Gold Star Committee chairman and Vietnam War veteran Joe Kelbley, the visionary behind the statue that started 15 years ago with planning and fundraising. When Kelbley’s health began to decline in 2015, progress toward the memorial slowed. That’s when Gwidt, the Gold Star Committee and other Post 492 members set forth a goal to fundraise the amount needed for the statue – $65,000.

“I’m real proud of us for what we did,” Kelbley said.

Over the past five years, fundraising efforts through raffles, cookouts, garage sales, donations, grants and community support resulted in the money needed for Purple Heart recipient and Vietnam U.S. Army veteran Andrew L. Chernak of Pennsylvania to complete the memorial. “The team did this for the Gold Star Mothers and to see Joe's dream come true after his health kept him from fundraising,” Gwidt said. “This was a team effort all the way though and was the best group I had worked with since my Army service.”

The Gold Star Mothers statue will reside at Veterans Memorial Park in Rothschild that has a Blue Star Highway Memorial marker, plaque naming 7th District of Wisconsin’s Medal of Honor recipients, and the Salute to Service and Soldiers cross. The memorial will be place for Gold Star mothers and families to “sit, reflect and cherish what all mothers teach their children … that there is no greater love than putting others before self,” Gwidt said. “The sacrifice of our Gold Star Mothers and families can never be repaid. But we can get a good start by making sure they are not forgotten.”