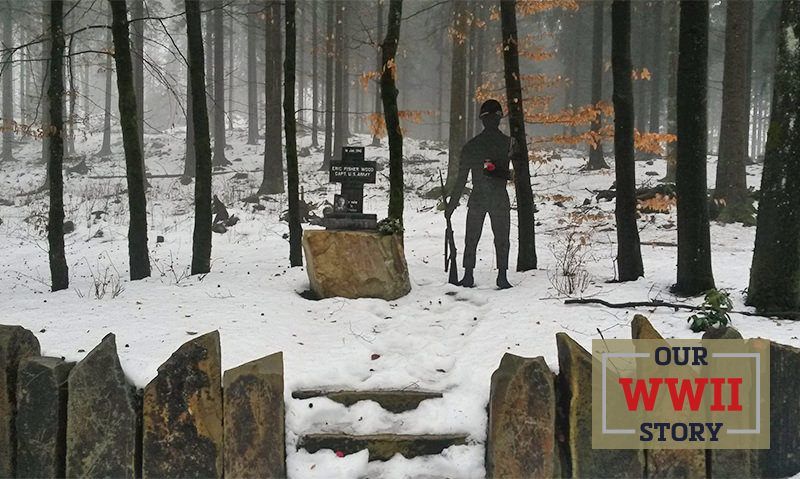 The body of 1st Lt. Eric Fisher Wood Jr. – son of American Legion founding figure Eric Fisher Wood – was discovered in the winter of 1945 in the Ardennes Forest. He was surrounded by dead German soldiers he had reportedly gunned down in his final moments from a hiding place in the woods of Belgium. The death date was ultimately established as Jan. 22, but accounts differ about his final weeks in what some say was a guerrilla assault he led in the Battle of the Bulge, Nazi Germany’s final major counter-offensive in World War II.

Born Jan. 25, 1919, in Santa Barbara, Calif., while his father and other Great War officers were in Europe planting the seeds of what would become The American Legion, Eric Fisher Wood Jr. grew up to become a top student and athlete at prestigious prep schools near Pittsburgh, where the family had moved in the 1920s. He was valedictorian at Valley Forge Military Academy, was accepted at Princeton and starred in football and track there. He was also a member of the Princeton ROTC, but his father reportedly told him to pass up an officer’s commission after graduation and return to the family farm in Pennsylvania. Fisher Wood Jr., who had gotten married and had a daughter with wife Margaret by that time, did so but also joined the National Guard there. A 2nd lieutenant in an artillery unit, he was called to active duty in 1943 and was assigned to the 589th Field Artillery Battalion, 106th Infantry Division. Margaret was pregnant with their second child as he trained for deployment to England in the fall of 1944.

The strapping first lieutenant – whose father presided as secretary over The American Legion’s formative Paris Caucus March 15-17, 1919, and later that year designed the American Legion emblem – arrived at the front line on Dec. 5, 1944, three days before his son, Eric Fisher Wood III, was born. Eric Fisher Wood Sr., was serving in England at the time as a brigadier general on Gen. Dwight Eisenhower’s staff.

The untested 106th had been positioned on the slopes near Schönburg, Belgium, and found itself in the crosshairs of a war-seasoned German tank unit trying to push back. Overwhelmed by numbers, Fisher Wood Jr.’s commanding officer was captured, and he assumed leadership. Firing on the enemy and falling back from Schönburg toward St. Vith, about 13 kilometers west, Fisher Wood Jr. and his men were stopped by a German tank blocking the muddy road. According to a 1952 account of Fisher Wood Jr.’s final days, published on the Chester County, Pa., Hall of Heroes website, “In the confusion of the moment, as some men raised their arms in surrender, Lt. Wood broke and ran away from the astonished Germans. With small arms fire trailing him, he dodged and weaved his way in a zig-zag pattern into a nearby wooded area. Wood survived. He was free … and alone.”

Most accounts of the days that followed his escape on Dec. 17, 1945, claim he soon met up with a soldier from the 82nd Airborne Division who had been separated from his unit. Fisher Wood Jr. and the other man were taken in by a Belgian farm family for one night where they were fed, got a good night’s sleep and were able to dry their clothes. Unable to get back to the others at St. Vith, they decided to make themselves a deadly nuisance to the Germans.

According to the 1952 article, by a graduate of the Valley Forge Military Academy, other soldiers who had been separated from their units soon joined them, and they formed a guerrilla platoon. How long they fought and survived in the winter wilderness near the village of Meyerode is unclear. Residents there claimed to hear small arms and mortar fire in the weeks that followed. The story goes that the group, led by Fisher Wood Jr., had collected abandoned weapons, food and other supplies and positioned themselves to fire on enemy forces from higher ground, concealed by the dense forest, and sabotage their rear units.

“According to the Belgian villagers, Lt. Wood and his guerrillas eliminated approximately 200 enemy troops and supplies,” the 1952 account states. “Nazi SS Gen. Sepp Dietrich was enraged by the harassing guerrilla activity and referred to Wood and his small group of raiders as ‘criminals and scoundrels.’ Gen. Dietrich issued orders to his SS units to find and eliminate them.”

A patrol eventually caught up with Fisher Wood Jr. at some point in January, surrounded and killed him. Most reports say that seven dead Germans were found in the same area when his body was discovered by Graves Registration personnel in February. The War Department initially listed his date of death as Dec. 17, which is when he was reported missing. Belgians in the area refuted that date, with the eyewitness accounts of the family that took him and the other soldier in, along with reports of his continued harassment of German units over the next several weeks.

The people of Meyerode placed a memorial cross in the forest where Fisher Wood’s body was discovered. Brig. Gen. Eric Fisher Wood later replaced with a permanent marker. He was buried alongside nearly 8,000 other heroes at the American Military Cemetery at Henri-Chapelle.

The American Legion founder’s son was later nominated for the Medal of Honor but did not receive it due to a lack of eyewitness accounts from his time in the woods.

In 1947, Gen. Eisenhower posthumously presented the Distinguished Service Cross to Fisher Wood Jr. at the Pentagon, where his wife, children, parents and brother had gathered. The citation identified the time span of his heroic stand as “from Dec. 17, 1944, to Jan. 22, 1945.” Of his experience that winter, it recounts the events this way:

Refusing to surrender, as enemy fire converged on him from all sides, he raced across a large open field into the woods beyond. Cut off from all possibility of returning to his own lines, far inside enemy territory in the Ardennes wilderness in the dead of winter, he rejected any temptation to surrender. Not content to maintain his liberty behind the enemy lines, in company with several other Americans in the area, he repeatedly initiated ambush attacks against enemy communications, supply columns and patrols, accounting for the deaths of scores of the foe. Valiantly, Lieutenant Wood continued his offensive actions until finally in a last fierce engagement with overwhelming forces he made the supreme sacrifice, where later his body was found surrounded by the bodies of several of the enemy, mute testimony to the daring, the loyalty and intrepid gallantry of Lieutenant Wood in the service of his country.

U.S. Rep. John Joyce, R-Pa., introduced a bill July 29, 2020, to reconsider Fisher Wood Jr. and approve his nomination to receive the nation’s highest military decoration, “to authorize the President to award the Medal of Honor to Eric Fisher Wood, Jr. for the acts of valor during the Battle of the Bulge.”