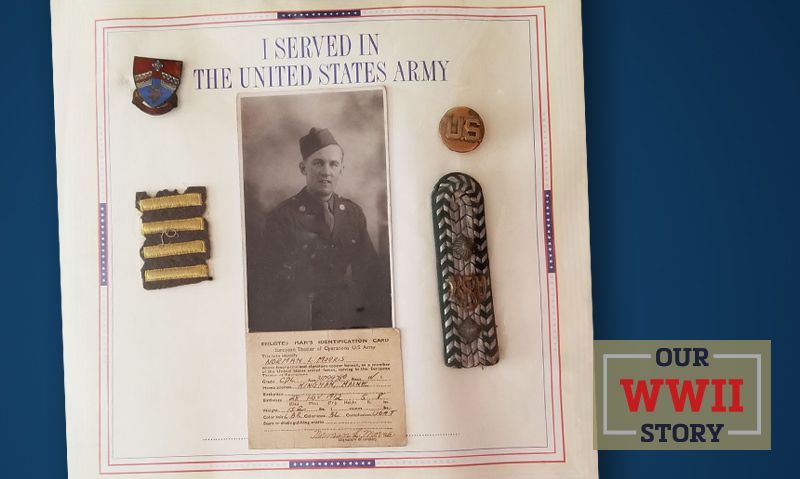 The inside cover of the scrapbook. (Photo via Lorna Morris Cyr)

Responses to this summer’s callout to the American Legion Family for World War II stories – to mark the 75thanniversary of the end of the war – are still coming in, through email, print and their own category on Legiontown. One emailed submission came from Lorna Morris Cyr of Bristol, Conn., who gathered her late father’s writings and photos from his service in Europe into an 80-page scrapbook for his descendants.

Norman Lowe Morris joined the Army right after the Pearl Harbor attack, in his 30s. He served in the 953rd Field Artillery Battalion. “The scrapbook,” Lorna says, “follows Norman’s time during World War II from his maneuvers at Fort Ethan Allen in Vermont and … ‘Somewhere in Tennessee,’ through France, Belgium and Germany, to the end of the war when he waited to be homeward stateside at a building in Czechoslovakia.” Through it all, Norman kept a journal where he wrote and inserted pictures, a few of which appeared in Stars and Stripes.

After he came home, Norman worked for the Pratt & Whitney aerospace company in Connecticut, and joined The American Legion. He died in 1992. Lorna’s mother, Ina, kept his journal and other documents in a cedar chest; “She wanted me to make sure I took care of it and passed it on to my son and grandchildren to look at someday,” Lorna says. When Ina died, Lorna got to work on the materials. Today the scrapbook incorporates writings; 77 V-mails he sent to his family, Ina and Ina’s family; a six-page Life article on the 1944 Battle of Hedgerows; 35 of Norman’s photographs (of these, Lorna reveals, “The original pictures are very small and he told me that he actually developed them in the field”); and, at the end, “paper clippings of Dad's friends who did not make it home, including some nurses.”

Lorna, who describes herself as a “furlough baby,” continues that when she put all these pieces together, “I realized the history I was looking at, through the eyes of an ordinary soldier.” She had heard pieces of it growing up: “Dad did tell ‘war stories’ – some sad, some more upbeat. All his stories began, 'Somewhere in ....'

“The one story I remember the most through my life: ‘Somewhere in Germany, there was a notice that the war was ending. Word went out throughout the American forces and the German forces that “fighting” was on hold. Our guys were camped on this riverbank and a stone’s throw across the river were Germans (he referred to them as Jerrys) who were doing the exact same thing we were doing. We watched each other across that riverbank and dipping our feet, washing socks, building fires and all in all feeling free. Someone started waving. Soon we were all just a bunch of guys on opposite sides of a river, waving and singing as if we were celebrating. I guess we finally were.’”

Lorna has been married for over 50 years to George Cyr, who was in Army security during the Vietnam War. (She read the story callout in his American Legion Magazine.) She describes him as more “tight-lipped” about his own service, but her father’s is secure. “It was a labor of love and respect that I always carried in my heart for my dad,” she concludes. “I want to share it now.”