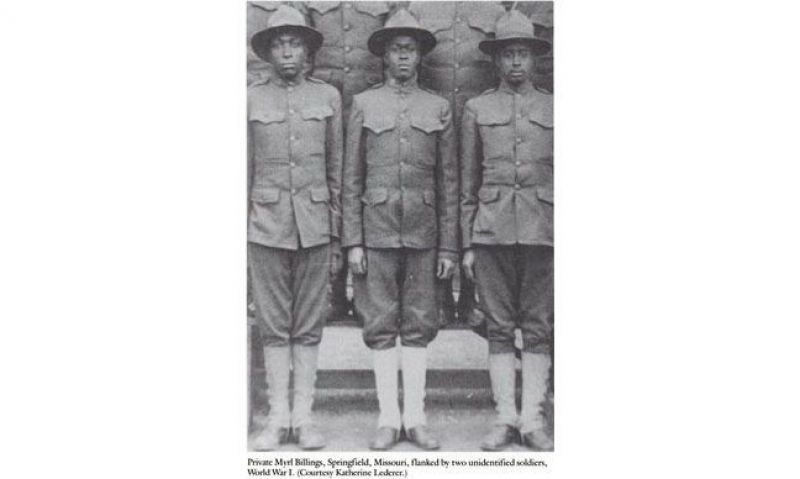 The history of Norval Stafford American Legion Post 125’s beginning is as dramatic as its near-ending. The driving force that unites both is an undying love of country, patriotism, and the common experiences that unite and forever bond together members of all military branches.

Two events in the early 20th century had a dramatic impact on the African-American community in Springfield, Mo. On April 14, 1906, two innocent Black men, Horace Duncan and Fred Coker, were abducted from the local jail, hanged and then burned to death by an angry mob. In their thirst for vengeance, the mob returned to the jail and took another Black inmate, Will Allan, and killed him also. What was once a thriving African-American community was decimated by the virtually overnight mass exodus of nearly 40,000 Black residents fleeing in fear. Those who remained in Springfield were determined not to be run off.

A little over a decade later the United States entered World War I. Young Black men who had lived through the horror of the 1906 Springfield hangings found themselves being conscripted into the Army to fight for a country that had done little to protect their families. In fact, they were not being asked to fight for their country, but to be labor in support of white soldiers. They were the blacksmiths, cooks, horse groomers and laborers for a military complex that did not want them.

We cannot begin to fathom what went through these young men's minds as they were shipped off to foreign lands to wage war. Some, like Springfield’s Myrl Billings, were not content to be relegated to support roles and actively sought to join a unit that would be on the front line. Eventually he found his place with a New York National Guard unit that would become famous as the “Harlem Hellfighters.” In WWI, the men of the 369th Infantry Regiment spent 191 days in the front-line trenches. During this time, part of the unit was pinned down by a German machine gun nest. Pvt. Billings and three others volunteered to take out the machine gun. They succeeded in killing three Germans and capturing four others while losing one man. Billings received the French “Croix de Guerre” in July 1925, after he had passed away.

Billings survived the battles of World War I and earned French individual and unit awards, but not without great personal cost, suffering lung damage caused by German gas attacks. When he returned home to Springfield, he learned of a new organization of veterans of the Great War called The American Legion. His health failing, Billings still worked to become a member of the Legion. Two local posts were organized, but neither would allow Blacks to join their ranks. Not to be deterred, Billings and fellow Black World War I veterans worked to establish their own post. American Legion Post 125, the Norval Stafford post, was organized in 1919 and officially chartered in 1928. In keeping with the tradition of other Springfield posts, they named it after Norval Stafford, the first Black veteran from Springfield to die from his injuries during World War I. Sadly, Myrl Billings did not survive to see the post receive its official charter. On July 10, 1928, the post received their charter; the official membership roll consisted of Leslie Gippson, Ellis Berry, Landan Smith, Robert Abernathy, Chas Jarrett, E.C. Curtis, Fred Johnson, Clifford Burns, W. P. Campbell, Essie Cooper, LeRoy Hayward, Floyd Smith, Willie Williams, Dallas Lenore, Oscar Hancock and Eugene Abernathy.

The decades after World War II, Korea and the Vietnam War would see small surges in the membership of Post 125, but time would take its toll. Springfield would never recover from the mass exodus of the Black community in the early part of the century, resulting in a smaller pool of Black veterans. Age and health issues decimated the membership ranks. By 2019, Commander Darrell Smith found himself to be the only member showing up for meetings and realized he had to make some hard choices on the future of Post 125. A few years earlier the members had voted to allow all veterans to join, but membership continued to dwindle. Despite the odds and determined not to have Post 125 become another footnote in history, Smith reached out to a diverse group of other American Legion members who were looking for a more service-oriented post. Their vision was of a post with monuments to all veterans of all wars and police actions. With great pride and acknowledgement of the sacrifices of Myrl Billings, Norval Stafford and the other charter members of Post 125, the current members have set a goal to build the Myrl Billings Veterans Complex. An option on 11 acres of land has been secured, and fundraising has begun for a building that will provide offices for smaller veterans groups, as well as an exhibition hall dedicated to Black Missouri veterans and a military museum in a separate structure. Walking trails, pavilions and a community event center will complete this dedication to those men and women who served our country so faithfully.

You can see and follow the progress of their vision on their web page, www.post125.org, and on Facebook. While Blacks were not allowed to join the local American Legion posts, the leadership of those posts and the state posts did work with them to get their charter. Whenever there was a local event or picnic by Post 125, it was attended by state and local commanders showing support for fellow veterans.

Michael E. Cook is a Vietnam-era Air Force veteran and vice commander of Post 125. After six years in the Air Force he worked 30 years in construction. He currently owns an antique collectible flea market and is pursuing his passion of writing.