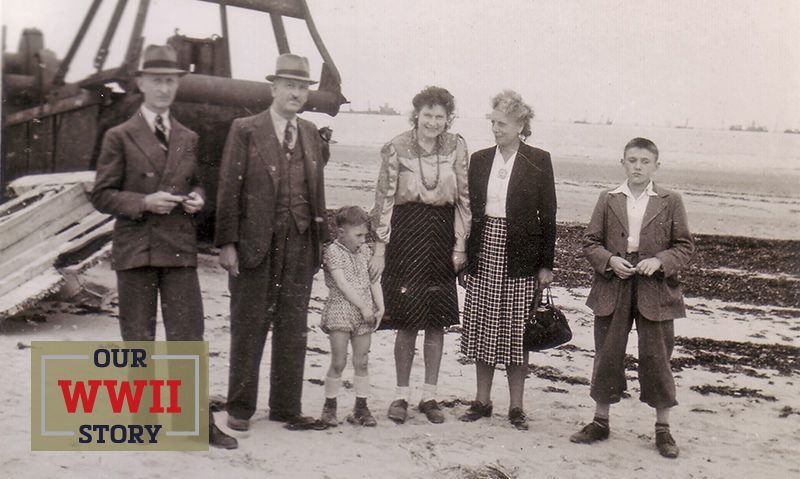 Paul Renaud was a 14-year-old French boy on D-Day – June 6, 1944 – when U.S. paratroopers jumped into Normandy in the first stage of an Allied invasion that would ultimately topple Nazi Germany 11 months later. He spoke fluent English and helped his father communicate with American soldiers in the days after the liberation of Sainte-Mere-Eglise, regarded as Kilometer 0 in the march to victory in the European theater of World War II. Following are Paul Renaud’s diary entries as provided by his younger brother, Maurice Renaud, who serves as president of Amis des Veterans Americains (Friends of American Veterans), which conducts commemorative ceremonies on the anniversary of the liberation each year.

Entries between June 1-7 were published in the June issue of The American Legion Magazine. This web-only expansion covers June 8-July 31, including the funeral of Brig. Gen. Theodore Roosevelt Jr., a founder of The American Legion. He died of a heart attack at 56 five weeks after coming ashore at Utah Beach in the first wave of the Allied invasion.

Around midnight, lots of U.S. planes at low altitude over SME. German flak in action. No result. Toward the sea, in eastern direction, like fireworks, red and green lights. Machine guns in action for about 2 hours. Suddenly, planes drop about 20 white parachutes over the town. The German machine gun in the steeple (we are 100 meters from the church steeple) [shoots] with tracing bullets. Parachutes are fake and only carrying some types of lanterns.

23h30: Lots of planes coming back just above the square trees. What does it mean? We are watching the square from the windows on the 3rd floor. The machine gun in the steeple starts shooting tracing bullets … 10 minutes later, we hear, "Fire! Fire!" The alarm bell rings in the night. Jumia Pommier’s house is on fire. Daddy goes with the firemen. We go down to the ground floor and take refuge.

Paratroopers!!! About 10 dropped near the fire … 6 got shot at point blank … 2 shot in trees … 2 fell in the fire and exploded. Everybody leaves the burning house.

Daddy is back. We all pray.

Daddy goes on the road going to Ravenoville. At the pond bordering our garden he pulls out a paratrooper from water. He was drowning. Daddy tells him, “Don’t worry. I am a friend.” I guess the paratrooper was scared he was a German.

At 1 a.m., noise of horse drawn carriages … the Germans are leaving town. Everything gets quiet. On the square, we see burning tips of cigarettes moving under the trees. One torch light shows the body of a dead paratrooper. We realize they are not Germans. But WHO are they?

At dawn, men with weird helmets, weird shapes, slowly walking, short guns … 3 are kneeling in front of the big tree. Daddy goes out. One soldier tells him he is OK.

At the crossroad,12 German prisoners walk by, hands up. We are stunned. They are searched. Paratroopers ask for the mayor. Daddy meets Capt. Schouvaloff. In the trees, parachutes of all colors: green, white, yellow, red and blue.

People in the town are getting joy crazy. The town is liberated … 3 battalions landed … a German cannon is brought into town … I go to see the dead paratroopers and the dead Germans on the square.

Around 2 p.m., the Germans counter-attack from Fauville and Neuville.

We leave our home to take refuge in a trench 300 meters from the square. A soldier tells us the tanks will arrive soon from the sea … 4 hours later, no tanks. The Lecoeur, Endelin and Boucher families join us. Shells from Azzeville battery fall all around us.

Night of June 6 into June 7

Azeville battery keeps shelling the town. We are anxious the tanks don’t show up. Germans are coming back 300 meters to the east of us. Our trench is in the middle, between the paratroopers and the Germans … 3 paratroopers are getting near us. On the other side we see Germans carrying hand grenades. From the shelling, branches and leaves fall on our heads. Suddenly one shell explodes on top of us.  Everything shatters.

Her husband François: "Wake up, Mimi, my darling!" She died instantly from shrapnel in her back. Mammy was sitting next to her.

The children are panicking with the bullets and shells flying over our trench. We all pray.

We learn the list of victims: J. Lemenicier, R.Jamard, Christiane Doré, Mr. Potigny, and 7 in the Viel family have been killed. We try, but don’t succeed, to sleep. Every quarter, the church bell rings. It means the steeple is not destroyed. From all the shelling, we assume that the town center is destroyed.

With the Germans getting closer, Daddy decides to move out of the trench. The women and the children are panicking. We start running, fall in the barbed wire. Mammy loses one shoe in the mud. We reach the cellar of Pommier’s house. It is 17h00.

In the yard, a donkey is dead … received several bullets. François Lecoeur, with his 3 children, looks desperate.

A short time later, we hear tanks on the road from Ravenoville. The Yankees arrive. We are safe.

Daddy goes to the house. We get anxious. He comes back. Good news. The house is still there, All the windows are broken.

Blandin and Davy arrive. We learn that Marius got killed and Dogon is seriously wounded.

From time to time, paratroopers come to see us.

Am going to get flour at Deschamps boulangerie. Daddy goes out often to guide U.S. troops. The troops arrive from the sea. They walk in lines from the beach. For the first time, I am going back to our house. All the animals are alive.

Daddy takes CPT Schouvaloff to Beauvais (northern outskirts of SME). Rabec’s farm burned down. American tank destroyed on the side of the road. Corpses everywhere in ditches. Terrible fight took place on the road bordering the city hall. Many dead Germans.

Daddy comes back sweating and very pale. We start burying our dead. Total 20. Wounded 7. Regular troops keep arriving. Now everything is quiet. Lots of gliders landed with men and material.

Dead cattle are buried. U.S. troops are fighting at Neuville au Plain and La Fiére. CPT Schouvaloff came to see us. German snipers have been shot. German flak commander is killed in his shelter in Fauville. 10 houses are destroyed or severely damaged.

I often go out with Daddy. The town is a complete mess. We meet CPT Owen and SGT Frank Famiglietti. Very nice people. We picnic outside with them. Suddenly, a shot is coming from the steeple … 6 soldiers walk up there and capture 2 Germans who were hidden as artillery spotters.

U.S. soldiers are in Blosville, Amfreville, Picauville … We are all outside. Suddenly, a terrible noise. Daddy shouts, “Come in fast!” A shell explodes just at the corner of the garage. Mrs. Quevillon and Margueritte are slightly wounded. I am lucky. Quiet night.

With Vermont, I go to the cemetery. More than 1,000 US soldiers and about 50 Germans are laying dead on the ground. Corpses are white, a few naked. It is hot and fleas are all over. The smell is awful. Several corpses are without their heads. Intestines out on grass. Hundreds of worms swarm in eyes, noses, mouths amid rotten bodies. Clothes are dirty. One corpse has an arm torn to shreds. We can see the bone. Faces are blackened. Poor liberators.

During the night, many planes flew over. Germans are still shelling SME.

Daddy has a lot of work. With Maurice Lecoeur, we went to visit the La Londe airport. P43 and P48 fighter planes … watched planes taking off and landing. Terrible noise, red dust.

Our house is full of Americans, as usual. Lunch, dinners.

French officers tell us that Général (Marie-Pierre) Koenig will visit in few hours. Daddy prepares his speech to welcome the hero of the Bir Hakeim battle.

With Captain T, we visit the beaches from Ravenoville to Utah Beach. Tents everywhere in the dunes, hundreds of balloons in the air, ducks, landing crafts on the sand loaded with ammunition, food, cars, trucks, jeeps, tanks … At sea 40 warships. Cranes on the beaches. Lunch with a commandant of the U.S. Navy … tea, 4 pieces of white bread on the table.

We learn that Mr. de Veyrac got accidentally killed by a paratrooper.

Am working as interpreter with the civil affairs. Caen and la Haye-du-Puits are finally liberated. Wolff, an American pharmacist, invites Henri Jean and myself for lunch at his camp. Owen came back to see us … major in 10 days. He fought in Cherbourg, Montebourg and Periers.

Orchestra playing on the square. Ceremony to the first American cemetery … 17 priests celebrate a mass. Only a few soldiers attending. All the SME population is there with flowers. Photographers, press reporters. At the end, all priests raise their hands for the blessing. In the evening, funeral of Gen. Roosevelt, cousin of the present President and (son) of the former. His son attends. as well as Omar Bradley and George Patton. Huge crowd. Many soldiers. Coffin on a truck covered with Stars and Stripes banner.

St. Lo is liberated. U.S. reporters came from Saint Lo to fetch Mammy and go to the cemetery. They take pictures of Mammy attending to Gen. Roosevelt’s grave. In the evening, heavy rain. Mammy fell in the mud.

Funeral of an American colonel. Patton and two 2-star generals attend. Soldier corpses keep coming in every day … a few with legs cut off.

Civil affairs staff leave. Farewell from all the officers. I made a design of the paratroopers coming down from the sky (which became the stained glass window in the church on the square in Ste. Mere-Eglise). Avranches and Coutances are liberated. Tank division Leclerc: 30.000 men drive through SME. Huge traffic all night long.

Maurice is kissed by many of these soldiers.