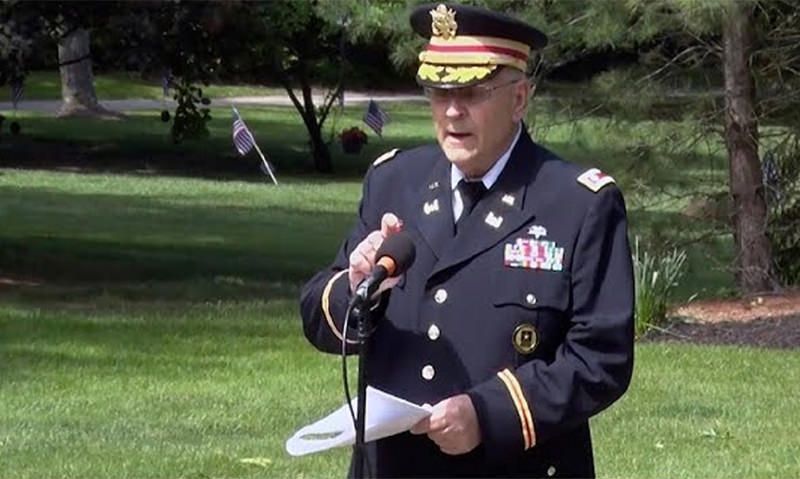 Retired Lt. Col. Barnard Kemter taps his mic after what he thought was an audio malfunction in the middle of his Memorial Day speech during ceremonies at American Legion Post 464 in Hudson, Ohio. It was later revealed that post leadership purposely cut his mic as he spoke about the role Black Americans played in the establishment of the holiday. (Hudson Community TV Image)

During retired Army Lt. Col. Barnard Kemter’s Memorial Day speech in Hudson, Ohio, the microphone was cut by two members of American Legion Post 464 when he shared a story about freed Black slaves who honored deceased soldiers after the Civil War.

After an investigation, The American Legion Department of Ohio has taken action against the two members and suspended the charter of the post. You can read the details here.

American Legion National Commander James W. “Bill” Oxford released a statement, saying, in part, “National headquarters is very clear that The American Legion deplores racism and reveres the Constitution. We salute LTC Kemter’s service and his moving remarks about the history of Memorial Day and the important role played by Black Americans in honoring our fallen heroes.”

The American Legion has issued an apology to Kemter, who approved the publication of his entire speech, unedited, which follows:

Welcome all.  It is a pleasure to see so many of you turn out to honor and pay our respects to those who gave their lives while serving our country.

I am Lieutenant Colonel Barney Kemter US Army Retired and an alumnus of Hudson High School, Class of 1962. I shall do the math for you, I’m 77 years old.. Many of you may have seen my posts on the Facebook page "I grew up in Hudson”.  Now you have the opportunity to place a face to those postings.  Some of you may recognize me from 5 years ago when I was here and was the featured speaker.

Today is Memorial Day. This is the day that we pay homage to all those who served in the military and didn’t come home. This is not Veterans Day, it’s not a celebration, it is a day of solemn contemplation over the cost of our freedom.”

Memorial Day was born out of necessity. After the American Civil War, a battered United States was faced with the task of burying and honoring the 600,000 to 800,000 Union and Confederate soldiers who had died in the single bloodiest military conflict in American history. The first national commemoration of Memorial Day was held in Arlington National Cemetery on May 30, 1868, where both Union and Confederate soldiers were buried.

Several towns and cities across America claim to have observed their own earlier versions of Memorial Day or “Decoration Day” as early as 1866. (The earlier name is derived from the fact that decorating graves was and remains a central activity of Memorial Day.) But it wasn’t until a remarkable discovery in a dusty Harvard University archive the late 1990s that historians learned about a Memorial Day commemoration organized by a group of freed black slaves less than a month after the Confederacy surrendered in 1865.

But in recent years the origins of how and where Decoration Day began has sparked lively debate among historians, with some, including Yale historian David Blight, asserting the holiday is rooted in a moving ceremony held by freed slaves on May 1, 1865, at the tattered remnants of a Confederate prison camp at Charleston’s Washington Race Course and Jockey Club – today known as Hampton Park. The ceremony is believed to have included a parade of as many as 10,000 people, including 3,000 black schoolchildren singing the Union marching song “John Brown’s Body” while carrying armfuls of flowers to decorate the graves.

More importantly than whether Charleston’s Decoration Day was the first, is the attention Charleston’s black community paid to the nearly 260 Union troops who died at the site. For two weeks prior to the ceremony, former slaves and black workmen exhumed the soldiers’ remains from a hastily dug mass grave behind the race track’s grand stand and gave each soldier a proper burial. They also constructed a fence to protect the site with an arch way at the entrance that read “Martyrs of the Race Course.”

Not surprisingly, many white southerners who had supported the Confederacy, including a large swath of white Charlestonians, did not feel compelled to spend a day decorating the graves of their former enemies. It was often the African American southerners who perpetuated the holiday in the years immediately following the Civil War.

If you visited the moving tribute to the fallen Heros from Hudson on what we old timers call the village green, all the men shared this oath and obligation;

It is a gift or pledge of their lives to the United States of America. That oath is a major part of who we are in the military. It forms the bedrock of what we stand for and are willing to fight for.

The oath fully embraces what we do and we let them guide our military service.
I distinctly remember being administered that oath 56 years ago, almost as if it was just yesterday. I was in Cleveland going through my preparations to enlist in the U.S. Army. I stood in a room with at least 40 or 50 other people, all standing at what we called "attention," facing the front of the room. An officer entered and said he was going to administer the Oath of Enlistment to all of us. At this point, I had never heard the words so I had no idea as to what we were going to say.

We raised our right hands, as he asked us to, and began to recite after him. It seemed as if time stood still, because I mentally paused and reflected on the words I was repeating. I thought to myself this is not a joke - this is real.

As soon as he had administered the Oath of Enlistment, I immediately felt a strong sense of patriotism. I felt as if I was invincible. Don't laugh. I'm not sure why, but I was young, I really felt a sense of belonging to something bigger than myself.

I thought, I could very well die. I would be defending the framework and the beliefs of a nation. I would do so against all enemies meaning I might have to fight to save my life, or another's, or our way of life. I might have to do it far removed from the safety of our country - but the country would be safe, or so I thought.

I chose to join the military and part of making that official is the oath - the promise we make to be a part of this elite group of Americans. We made that oral commitment so all will know what our country means to us and what we will do to defend it, its values, and the right to our way of life.

We are here today to pay tribute to those who freely took this oath and ultimately gave their lives. Part of the Memorial Day celebration is a period of silence and reflection at 3 PM.  Please join with me at that time in remembering these young men whom I personally knew that were a part of my generation who answered their country’s calling:

From Peninsula were 2 people who attended Hudson High School:

I do not choose the time or the place

Convenience is not in my vocabulary

I stand at the ready

When my orders come, I go.

I may not see a child born,

A wife, a husband, parents, friends, I may never see them again.

But willingly and with conviction I go

The job that I’m given to do

I will do even if it costs me my life.

A car approaches, a bicycle, a cart

I fix my stare and hone my senses

I have but a short time to take action

But I show restraint, it is part of my job

I repair hospitals, schools and homes

This too is part of my job

I gaze at those around me

In a foreign land I see a child

A wife a husband, parents, friends

Oh how I wish I were home

Oh how I wish they were mine

Yes, take me home, but only when the job is done

Only when the job is done

Thank you for your participation today.  God bless you and God bless America.