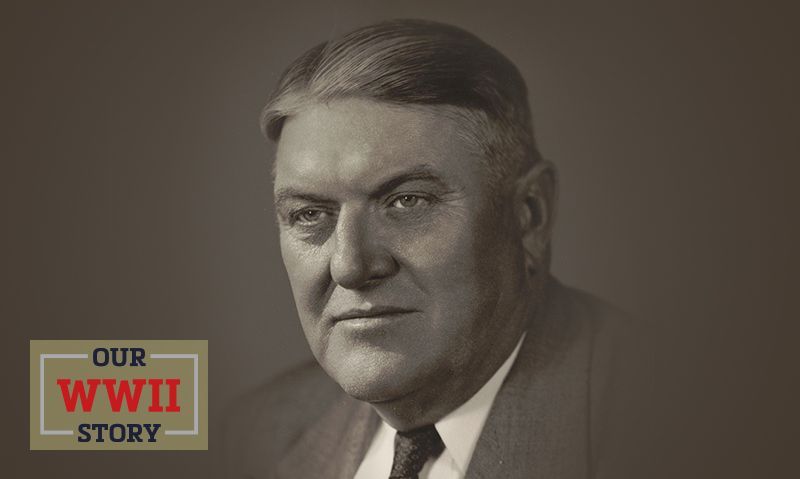 By the time John Stelle of McLeansboro, Ill., was elected national commander of The American Legion in November 1945, he had already compiled an illustrious record of military service, business leadership, law, politics and patriotism.

As chairman of the blue-ribbon American Legion special committee that wrote and fought for passage of the Servicemen’s Readjustment Act of 1944 – the GI Bill of Rights – his contribution to veterans and their futures was destined to long outlive him, ultimately changing the U.S. economic course from prewar Depression to postwar prosperity.

A graduate of the Western Military Academy at Alton, Ill., he was married, starting a family and even played one season of professional baseball in Owensboro, Ky., before the United States joined the western allies in Europe. Eleven days after the U.S. declaration to enter the Great War in April 1917, Stelle enlisted in the U.S. Army and went on to serve in France with the 115th Machine Gun Battalion, 30th Infantry Division. He was wounded and gassed in combat, rising to the rank of captain through battlefield commissions.

A delegate to the formative St. Louis Caucus of The American Legion in May 1919, Stelle helped organize Post 106 in McLeansboro and several others in Illinois. A lawyer, farmer and oil producer in his civilian career, he was elected state treasurer in 1932, lieutenant governor in 1936 and stepped in for a short stint as governor in October 1940 following the death of Gov. Henry Horner.

The United States entered World War II less than a year after Stelle’s service ended as governor of Illinois. Almost immediately, he shifted his focus to the new generation of veterans who were soon coming home medically discharged due to their wounds at a clip of about 75,000 per month.

Two of Stelle’s sons – John Albert and Russell – were soon “following in the footsteps of their father,” as May 1946 American Legion Magazine recounted. Lt. John Albert Stelle came ashore in the D-Day landings of Normandy and was later wounded at St. Lo. Russell Stelle was a P-51 pilot in the Army Air Corps and flew 77 missions in Europe during the war.

Onstage at the Nov. 21, 1945, 27th National Convention in Chicago, Past National Commander Edward A. Hayes presented the unanimously elected Stelle his colors and recapped his dedication to the organization:

“I know that you … gave part of your own blood and that your two sons in World War II gave part of their blood for the things which are significant of the United States of America.”

In his acceptance speech, Stelle captured the essence of the GI Bill’s spirit: “I say that the man or woman who was specially taken by law from his home, his job or his education in order to serve his country is entitled to be specially restored by law to that home, that job or that education.”

He told the convention that “we will not – cannot – compromise” in the need to support disabled veterans. “The sacrifice made by our disabled and wounded is a debt which the nation cannot count in terms of material repayment. We can only humbly offer our best in care and devotion. We will not tolerate any neglect of this obligation.”

During his year as national commander, World War II veterans surpassed World War I veterans as members of The American Legion. Stelle urged departments and posts to welcome the new generation, honor their service and offer them opportunities to continue serving, as veterans.

“By the hundreds of thousands, they are enrolling as American Legionnaires,” Stelle wrote six months after his election. “Already these men and women of World War II are in the majority in our two-war organization … It is one thing to enroll these new veterans. It is quite another to hold them.

“We can hold them by giving them proper recognition of their importance in our organization. We must give them responsibility. We must put them to work. We must elect them to office. We must put them on our committees. We must push them ahead into positions of greater and greater leadership.”

Two months later, after a year of such words and encouragement from Stelle, membership in The American Legion hit its all-time high of 3,326,556.