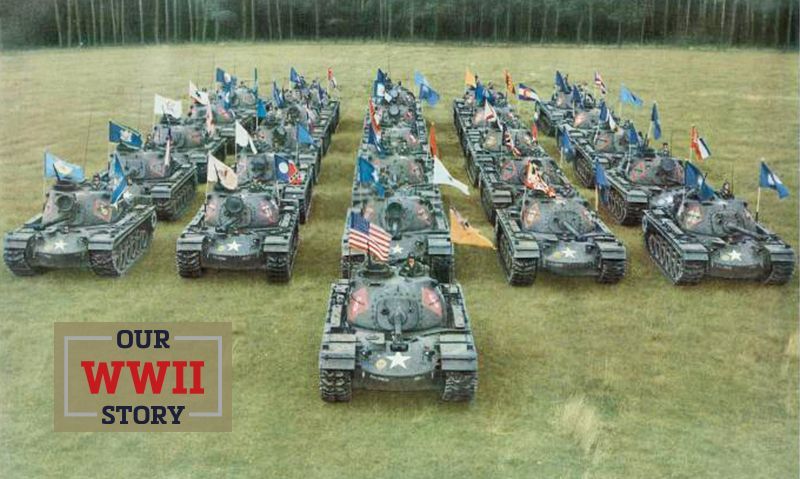 First overseas mounted display of the flags of the 50 U.S. states by the 4th Armored Division at Grafenwohr, Germany, June 17, 1961.

Ken Schumann, a member of Donald McMahon American Legion Post 64 in Stowe, Vt., submitted to the Legiontown site his early memories of the American flag, which involved the end of World War II in Europe.

“On May 8, 1945 (V-E Day), my parents (immigrants of the early 1900s) gave me (age 7) a small American flag and we joined the celebration in Times Square, NYC. Having been exposed to the colors at an early age, interest, pride and loyalty in our flag continued in my youth and adulthood. In the late 1940s I was chosen and had the honor of carrying our flag during the weekly elementary school assembly. As a Boy Scout in the early '50s, I participated in many flag ceremonies including a large Scout demonstration in Madison Square Garden. In the mid '50s I was a bugler at summer Scout camp and performed in many flag ceremonies. In the late '50s I served as a member of a Fort Dix honor guard that participated in military burials."

Schumann’s parents had emigrated from Germany. He describes the atmosphere of Times Square as “joy and bedlam.” In 1958, Schumann enlisted in the Army and found himself assigned to a combat command of the 4th Armored Division on the German-Czechoslovakian border, as well as serving as a German interpreter. His three-year commitment was extended a year by presidential decree due to the erection of the Berlin Wall; he was honorably discharged in 1962.

He continues, "Upon discharge in the early '60s I erected a flagpole on the lawn of my first home in Englishtown, N.J., and proudly displayed two flags (Old Glory and MIA). In the early '90s I continued to display our flag at my next home in Stowe, Vt. Each year on Memorial Day and Veterans Day I lined my driveway with American flags. At age 83 I continue to do so and cherish the memories."