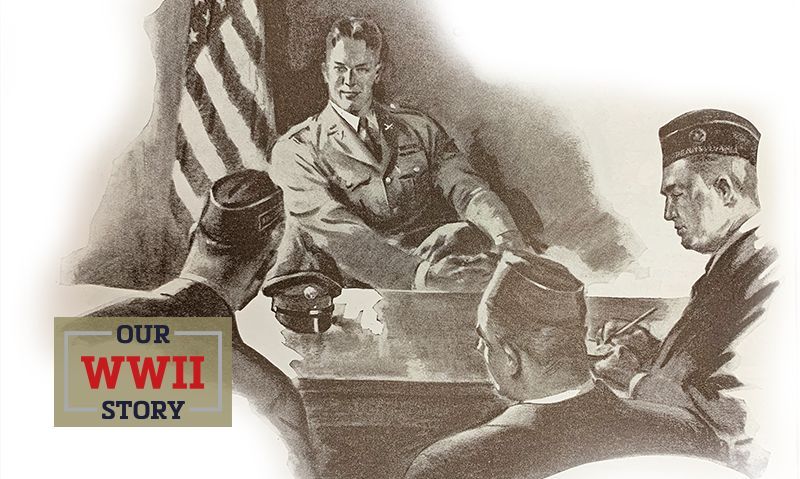 On Oct. 29, 1942, President Franklin D. Roosevelt signed Public Law 767, amending The American Legion’s congressional charter to allow those who served during World War II to become members of the organization originally intended to disappear after the World War I generation was gone.

Suddenly, the Great War veterans of The American Legion needed to develop plans to serve and welcome a new generation. Two weeks after the charter was changed, the National Executive Committee established a temporary liaison committee to figure out how to engage a large, young audience of veterans, many coming home physically or mentally changed by combat.

A year later after establishing it, the NEC removed the word “temporary” from the World War II Liaison Committee. The committee’s work would only be as temporary as the war itself.

“The purpose of this committee briefly is to formulate and effectuate such a program of service and education for the men now in service, their families, and the new veterans,” American Legion National Commander Roane Waring reported to Congress in 1943. “This is a gigantic undertaking and one most vital to our future welfare ... The opportunity for service is unlimited. Post-war plans are being formulated. The Legion of tomorrow will be the direct result of the interest and endeavor manifested by the Legionnaire of today in the program of this committee. To build a greater Legion will not only aid in the stabilization of America during the post-war period but will point the way to a greater America.”

The National Finance Committee of 1943 allocated $250,000 – about $3.8 million in 2021 dollars – for the committee’s various operations to develop services – and awareness of them – for the World War II generation and their families.

In addition to “Fall In” and “At Home” – booklets produced and distributed by The American Legion to World War II military personnel and their families – a new field service was developed to personally reach out to the families of newly discharged veterans, state-by-state, to help them with their government benefits.

The work of the World War II Liaison Committee was mirrored at the department, district and post levels and included collaboration with the Army and the Navy, which provided updated casualty lists to The American Legion. National Headquarters could then share the lists with state and local American Legion World War II support teams who would then make direct contact with the families.

The World War II Liaison Committee soon learned how important its work was. The NEC adopted an official three-prong policy for the 15-member panel, which grew to include one representative from each American Legion department:

-       To maintain constructive relationships between The American Legion and the men and women serving in World War II.

The World War II Liaison Committee touched nearly every aspect of The American Legion during its time, but getting information out was the biggest undertaking. Booklets, billboards, radio advertisements and a miniature American Legion Magazine edition for distribution to troops overseas were all part of the campaign.

Vocational training, re-employment and education opportunities after service were all priorities of the World War II Liaison Committee, which pre-dated the GI Bill Committee by over a year.  A series of area conferences was conducted to share ideas across the country so departments, districts and posts were operating in harmony to support the new veterans.

On May 5, 1943, American Legion National Headquarters opened an information center at Union Station in St. Louis to personally meet and communicate with military men and women transferring through that location.

American Legion news and images were sent each week to more than 1,200 military publications, and The American Legion provided film for the Photographic War Services, which worked with the USO to send images back home to the families of deployed personnel “on a card that carries the following notation: Courtesy of United Service Organizations and The American Legion,” according to the committee’s first-year report.

Local posts were encouraged to write letters to the deployed troops, collect and send playing cards to them (515,000 decks were sent from posts by June 1943); conduct memorial services for the fallen of World War II; present Gold Star certificates to the families who lost loved ones in the war; offer post homes for any servicemember on furlough and have a specially designated member communicate with them to see how the Legion can help; make service officers immediately available to those who have come home with war wounds; and “develop new activities for World War II in accordance with the needs in the community.”

By the summer of 1943, National Headquarters was mailing out millions of messages. A special folder called “It’s a Fact” went out to 1.5 million addresses. The “Fall In” booklet: 2.1 million. “At Home” booklet: 468,733; more than 3 million hospitality cards and nearly 25,000 gold and silver star citations.

Less than a year after the committee’s establishment, Chairman J. Ernest Isherwood wrote that The American Legion was now focused fully on what he and his fellow World War I veterans did not get when they came home – a qualified veterans support organization to advocate on their behalf and help them re-enter civilian life.

“The entire machinery of the Legion is rapidly being geared to assist the fighting men of this war and their families at home,” Isherwood wrote in a September 1943 American Legion Magazine article titled “Two-War Legion.” He and his fellow Legionnaires were pleased that they had formed a support network capable of helping the World War II generation in ways no previous war era’s veterans had.

“The experience of the Legion specialists in veterans affairs is now at the disposal of soldiers, sailors, Marines, and members of their auxiliary services,” Isherwood wrote. “The men and women of World War II will not have to travel the rough road of the pioneer in the rehabilitation, child welfare, legislative, and Americanism problems of the veteran, as did the men of World War I. They will not have to use the trial-and-error method. The American Legion, with its trained personnel, its years of experience, is on the job now and is seeking further opportunities to serve its uniformed comrades of today.”

Vilas Whaley of Wisconsin – who took over as chairman of the committee after Isherwood had to resign due to health reasons – brought the original World War II Liaison Committee to a close in 1945 after the National Executive Committee renamed it the Expansion and Stabilization Committee, which would operate on a year-by-year basis.

“We believe that the work of the committee is far from being completed,” Whaley reported in 1945. “The new name itself implies the functions of the committee in the future … What the membership will be in 1946, no one can at this time accurately prophesy. It is safe to assume that there will be a tremendous increase in membership in 1946 and in 1947. Because of the new duties imposed upon the Expansion and Stabilization Committee, we recommend a meeting of the full committee shortly after the first of January 1946, to organize and prepare to carry out the duties assigned.

“With a large increase in membership, The American Legion now faces its greatest opportunity and, at the same time, its greatest responsibility, for service not only to the members but to the nation as well. There is a demand for the continued activity and interest of The American Legion in the life of our nation. The future of this nation and the continuance of our form of government stand high upon the Legion program. The Legion in the years of its existence has served the nation well, and I am sure that the same spirit of service will continue.”