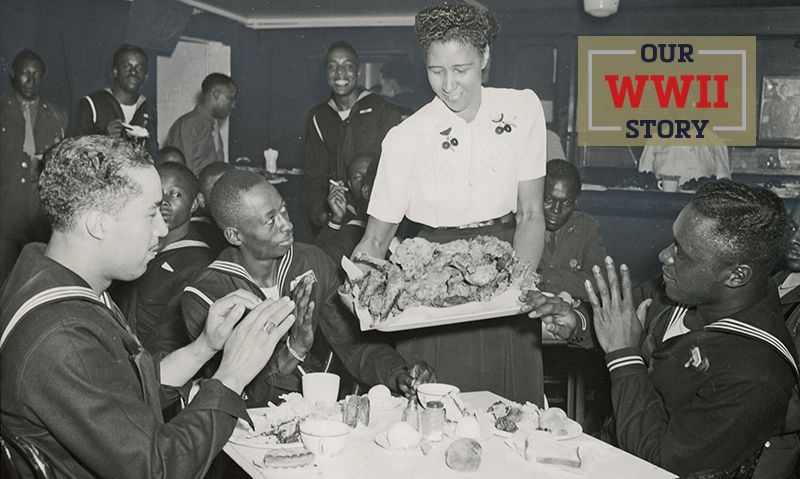 A group of sailors ate their fill at the world's biggest chicken dinner hosted by The American Legion. Published in the National Legionnaire, October 1944.

The best way to please active-duty personnel, The American Legion knew, was to feed them.

So, in advance of the 1944 and 1945 national conventions – both in Chicago – Legionnaires prepared what was billed as the “world’s biggest chicken dinners.” In the first event, they fed 61,177 soldiers, sailors, Marines, WACs, WAVES and members of the British Navy training there.

The undertaking – repeated the following year for training troops soon to deploy in World War II – involved 52 school cafeterias that turned their kitchens over to the Legionnaires. More than 45,000 pounds of chicken were served, along with sides, drinks and dessert.

American Legion National Commander Warren Atherton served the first meal of the 1944, pre-convention chicken dinner in the Service Center of the Auditorium Hotel.

“You can’t go wrong when you feed a hungry soldier, sailor or Marine,” The American Legion National Legionnaire newspaper reported of the first dinner. “Remembering their own days in uniform, members of The American Legion decided that an old-fashioned fried chicken dinner would speak more eloquently and in a language no one could fail to understand … so it was decided to give a chicken dinner to every GI and (sailor) – both men and women in uniform – during the national convention in Chicago.”

Funds for the dinner came from the budget of the Legion’s World War II Liaison Committee. A small army of American Legion Department of Illinois members handled the massive workload of preparing and delivering the meals.

“It was a worthwhile investment of Legion funds and, we believe, will return good dividends,” World War II Liaison Committee Chairman Vilas Whaley told the National Executive Committee in a future report. “We owe a debt of gratitude to the officials and those in charge of the servicemen’s centers in Chicago and to many Legionnaires of the Department of Illinois who had charge of the details.”