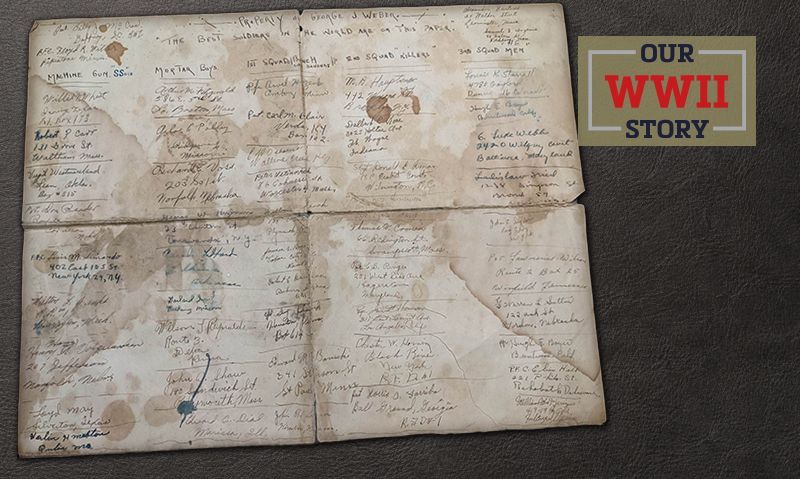 Connecticut native George J. Weber spent a portion of 1944-1945 serving in Europe with the Army’s 5th Armored Victory Division. During that time, he obtained a scroll and began filling it with what his younger brother Joe has described as “the handwritten names and hometowns of PFC Weber’s platoon members serving alongside him …. He called them ‘the best soldiers in the world.’ The names on the scroll reflect the breadth and the greatness of the country that he loved.”

According to Joe’s son John Weber, Joe is a longtime Legionnaire and has spent decades honoring history and veterans via talks and articles, including one he developed on his brother’s keepsake. George was a crewman on a halftrack, and his platoon mates hailed from across the United States, from Baltimore to Los Angeles. A project like the scroll would have come naturally to George; Joe calls him “a meticulous craftsman” and “artistic and clever with his handiwork.” After the war, he took the scroll home with him to Connecticut, and kept it until his death in 2012.

Of the scroll today, Joe says, “Over the years, it’s become discolored and faded in places like any living thing, but this only adds to the true value of this unique piece of Americana.” George’s daughter has possession of it. And of George’s platoon mates, “In a way, he beat Tom Brokaw’s similar phrasing describing that very special group by some 50 years.”