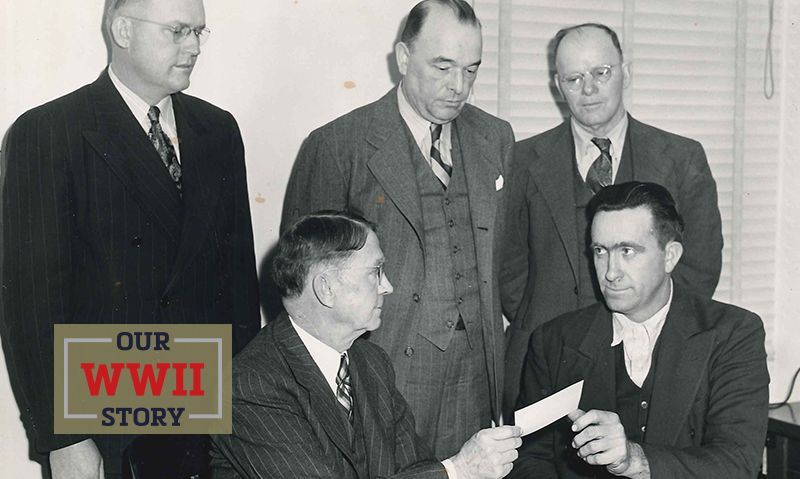 Rufus Hayes of Route 2, Marietta, Cass County Texas is shown as he returned the first farm loan to be closed under the guarantees of the GI Bill. The guaranty for this loan was approved on Monday, January 22 and the loan closed on January 23. Hayes used the loan to purchased 100 acres with a ten-year oil and gas lease for $2000. Standing, from left to right: Wilburn A. Satterwhite, FSA supervisor for Cass County, Texas; R.F.Andrews, VA Loan Guaranty Unit Washington Representative; Tom A. Dalrymple, Chairman of the Certifying Committee. Sitting, from left to right: W.O. Irwin, lender and Roy Rufus Hayes, veteran borrower. The lender is an official with the East Texas Steel Corp., who made similar loans available.

The Servicemen’s Readjustment Act of 1944 – better known as the GI Bill of Rights – was not an unqualified, immediate success. In fact, its first full year led to thousands of complaints from veterans, who looked to The American Legion to fix the problems.

American Legion National Legislative Director John Thomas Taylor, who was serving in World War II while his fellow Legionnaires were fighting to get the measure passed in 1943 and 1944, identified multiple flaws in the original version that needed to be corrected.

“A year's operation has shown weaknesses and inadequacies in the bill and in the regulations adopted by the Veterans Administration to make it effective, of course,” Taylor wrote in the August 1945 American Legion Magazine. “That was expected; and The American Legion is moving now to correct those weaknesses.”

Among the issues he and American Legion National Commander Edward N. Scheiberling pinpointed were “inadequate administration, red tape, narrow interpretations … Administration of the legislation has not been in keeping with the spirit and intent of Congress.”

The American Legion had led a major national campaign to get the GI Bill passed into law after 1943-44 National Commander Warren Atherton assembled a blue-ribbon committee led by former Illinois Gov. John Stelle to rein more than 600 measures into one omnibus bill to support medically discharged veterans, who were coming home at a clip of about 75,000 a month, to virtually no support services or economic opportunities.

The American Legion had cleared multiple congressional hurdles, including dramatically breaking a deadlocked conference committee that nearly killed the GI Bill two weeks before it was signed into law, before the problem of implementation migrated to the 14-year-old Veterans Administration.

The primary complaint from veterans using their benefits: too much red tape.

“Regulations must be changed to eliminate masses of red tape that hog-tie the veteran, with liberalization of many of the provisions in the GI Bill, so he can get easily what he was promised by Congress,” Scheiberling wrote. “Every day, the number of discharged veterans increases; every day, hundreds are learning that not only do the regulations fail to fulfill the promise offered to them under the Bill of Rights, but in some cases, they actually give veterans less than has already been provided by Congress for civilians.”

Taylor and the commander raised issues over differences between assessed home values and actual markets when veterans were trying to use their VA Home Loan benefits. The $2,000 maximum amount available farm loans “… is not enough for the purchase of a good, well-equipped and productive farm,” Scheiberling added. “Perhaps we could increase that guarantee with small risk of loss.”

Taylor pointed out that the VA home loans were actually functioning better than Federal Housing Administration loans “at a similar stage in development.” The process, however, was anything but smooth, and the benefits often were not enough to do what the GI Bill intended to do, the commander argued. “The proper kind of Bill of Rights will help our veterans become self-sufficient,” Scheiberling said. “It will increase employment and production. It is not a contribution to charity; it is a government investment in manhood, womanhood and democracy.”

“No other single law has provoked the universal discussion that the GI Bill has stirred up,” Taylor observed. “It’s been cussed and discussed on every side. It’s been praised to the skies as a panacea of every possible ill; it’s been condemned with every possible epithet … The GI Bill was not a bonus bill. It was, as its name – the Servicemen's Readjustment Act of 1944 – implies, a program to speed the readjustment of returning veterans to civilian life. It was designed to restore them as closely as possible to the economic and social status they would have enjoyed had they not been called into the service of their country.”

Changes were needed to the 1944 measure.

The Legion took its year of observations, study and criticism back to Congress and the VA for the first of what would be many efforts to make a better GI Bill. The recommendations included:

-       An amendment to authorize business loans for working capital and inventories for veteran entrepreneurs. “Many a veteran has been denied a business loan because most of the funds derived would have to be used to purchase a stock in trade,” Taylor said. “Many small businesses consist of little but a lease, a few dollars worth of equipment and the good will and goods that will be sold. Veterans complain, with justice: ‘What's the good of helping me buy a business if I can’t get the money to operate it after I've bought it?’”

-       Speeding up and simplifying loan processing, particularly business loans. Bureaucratic snags made application and acceptance of VA home or business loans a long and torturous journey for most veterans. “Protracted delays may not only irk the veteran but may even cause him to lose an excellent opportunity,” Taylor wrote. “The present system of issuing certificates of eligibility to veterans is a major cause of delay. These certificates are simply statements of the veteran’s service in the armed forces, and the nature of his discharge. At present, the veteran cannot apply for a certificate until he approaches a financial institution for a loan – and the loan cannot be processed until the certificate is obtained, a matter that sometimes takes three or four weeks. The Legion is proposing that the loan guarantee application be submitted simultaneously with the application for a certificate of eligibility – which would cut as much as a month, or more, from the time needed to complete the loan.”

The American Legion also pursued amendments, with congressional support, to:

-       Extend the time limit within which a veteran may apply for a loan from two to five years after separation, to five to 10 years.

-       Expand the farm-loan provision to include purchase of seed, feed and fertilizer.

-       Extend the business-loan provision to include purchase of inventories needed to operate a business, as well as pay for construction, alteration or repair of any business property purchased.

-       Extending the definition of eligibility and age limits for GI Bill education.

-       Availability of GI Bill funding for short, intensive courses in high demand, such as aviation, photography and specialized fields in science and technology.

“The chief quality which is needed is a will to make the bill work efficiently and smoothly for the veteran,” Taylor explained. “Changes in the bill or in regulation will be effected. And the Legion is confident that every American is anxious to do his part in making the GI Bill work – in seeing that it becomes in fact what it was intended to be, a gateway to opportunity for the veteran.”

More than 75 years later, the process of making the GI Bill work efficiently and effectively for veterans, continues to evolve and remains a continuous priority for The American Legion.