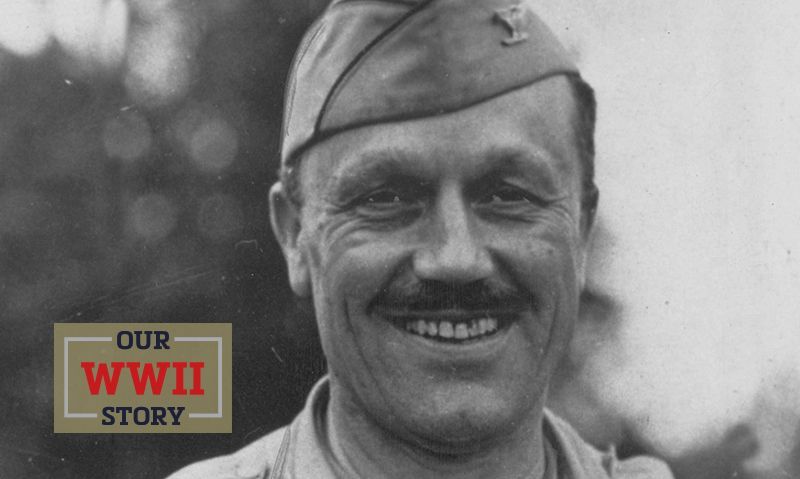 Col. H. Weir Cook is believed to be the only World War I ace who went on to fly missions in World War II.

In a normal year, more than 9.5 million travelers fly in and out of the Indianapolis International Airport. Those who enter the passenger-ticketing terminal pass a 7-foot statue and an acrylic wall display honoring the namesake of the structure, Col. H. Weir Cook, a pioneer of early U.S. aviation. Without question, he was that, promoting commercial air travel, developing community airports, encouraging young people to learn to fly and continuously extolling the virtues of his beloved mode of travel.

Cook was also a highly decorated World War I flying ace, American Legion staff director and trainer of World War II combat pilots. He died in the South Pacific Theater at age 50, believed to have been the only World War I ace to have also enlisted for combat service in World War II.

The famed Eddie Rickenbacker, who joined Cook on the American Legion’s Aeronautical Commission in the 1930s after they fought together in the in the 94th Pursuit Squadron during World War I, had visited Cook in the South Pacific just weeks before he crashed a Bell P-39 Airacobra into a weather-shrouded mountainside in the New Caledonia archipelago. “He died as he would want to, still serving the country he loved so well,” Rickenbacker said after learning of his friend’s fate.

To have not volunteered for World War II combat service, Cook reportedly wrote in a letter to a friend “would have left me feeling that I should be hanged as a traitor to my country.”

The Indiana native left college in 1917 to serve as an ambulance driver just prior to U.S. entry in the Great War. He enlisted as a private in the aviation section of the U.S. Army Signal Corps and trained in France. Once trained, he went into action, flying with Capt. Rickenbacker and the so-called “Hat in the Ring” squadron. Cook was known for fearless, aggressive air offensives and shot down seven German planes. He received the Distinguished Service Cross for individually confronting and turning back a swarm of six enemy planes on Aug. 1, 1918, and three more, also by himself, three months later.

He flew missions over Chateau-Thierry, Aisne-Marne, St. Mihiel and the Meusse-Argonne before he was sent into Germany as part of the Army of occupation there. He came home a captain, continued his service in the Indiana National Guard, flew airmail routes when that was an Army function and helped establish the U.S. Air Mail Service. He was extremely active in community organizations and was a member of American Legion Aviation Post 171 in Indianapolis. A vocal advocate for the advancement of commercial air travel at the time, he was also a leader in the American Legion Department of Indiana’s aeronautics program, later leading in that area at the national level.

In 1926, he was credited as the first aviator to fly relief medicine from Indiana to Florida following a devastating hurricane there.

Cook, who resigned his first Army commission in 1928, served as director and later vice chairman of the American Legion National Aeronautics Commission from 1932 to 1941 when he resumed training military pilots as war loomed.

He had earlier led a youth flight-training program called the “Flying Cadets” and toured the country displaying his collection of model airplanes and encouraging young people to take up the craft. “Model airplanes, I hasten to emphasize, are not toys,” Cook wrote in the June 1933 American Legion Monthly. “Moreover, there is a direct connection between American aerial preparedness and model-building by the younger generation. From the tiny winged acorns grow the mighty air oaks.”

Model-makers, Cook wrote, had grown up to become aviation engineers who had made massive breakthroughs – including the first steel shells – for American airplanes, which had lagged sorely behind Europe at the time of World War I. The American Legion National Aeronautics Commission had made the Model Aviation League an official youth program that would yield a crop of aviation engineers whose skills were put to work in the Second World War.

Another program of the commission, and a passion of Weir, was “air-marking cities and towns, and of developing flying fields.”

In the 1930s, he had his own radio show, “Col. Cook and His Flying Corps,” that shared facts about flying and stories of his time in aerial combat. He was an Army aviation instructor for the Indiana National Guard before World War II and made his services available for Army pilots training at Camp Shelby, Miss., Wright Field in Dayton, Ohio, and other locations before rejoining the active-duty force.

Along the way, he made a significant effort to convince the Smithsonian Institute and other historical authorities that Orville and Wilbur Wright were truly first in flight in 1903 – a point that was debated for more than four decades. Cook was personal friends with Orville Wright.

In July 1942, Cook was promoted to colonel and soon was on his way to the Pacific Theater to lead a new generation of war pilots and set up landing fields. He told his family good-bye in September that year. They would never see him again.

Hundreds attended Cook’s American Legion-led memorial service in Indianapolis, which was also broadcast on the radio. In his eulogy, record-breaking speed pilot, World War I flyer and fellow Legionnaire Roscoe Turner described Cook as “the type of American we all idealize – a fighter, a pioneer and a leader… No greater tribute can be paid Col. Cook than to say that our aviation industry, our community, our state and our nation are better for his having lived.”

In March 1944, the Indianapolis Municipal Airport was named in his memory and a plaque was installed near the control tower, which read, “Weir Cook: What he dared to dream, he dared to do. May his memory forever inspire others to serve as well.”