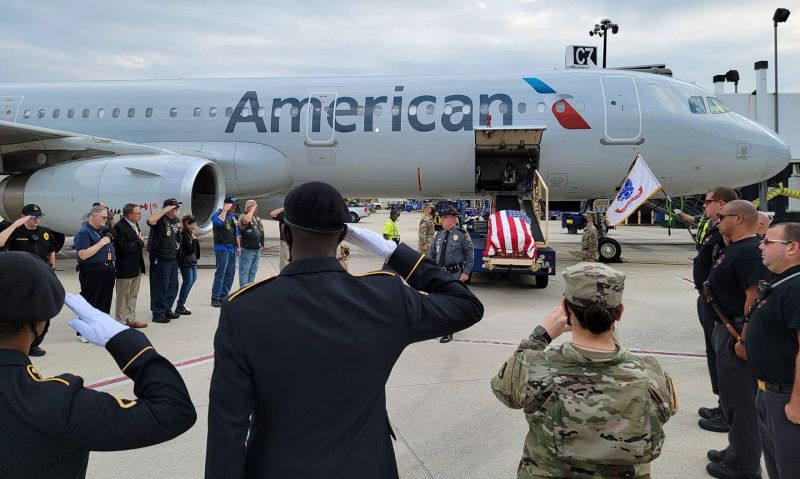 For decades, members of U.S. Army Air Force 2nd Lt. George M. Johnson’s family awaited word that his remains would be returned home to Seaford, Del. When they finally were, members of Nanticoke Post 6’s American Legion Family were there to help ensure he got the return he’d earned.

Johnson was a member of the 38th Bombardment Squadron’s 30th Bombardment Group and was one of 10 servicemen killed Jan. 21, 1944, when the bomber he was co-piloting crashed into a Tarawa lagoon in the South Pacific shortly after takeoff.

Five individuals’ remains were recovered, three identified, while Johnson was still listed as missing in action in 2019 – until it was realized that Johnson’s remains had been sent stateside and buried in a suburb of Buffalo, N.Y., in a grave marked for Staff Sgt. John Roland “Jack” Busch. When Busch’s remains were identified in a coffin buried in Cemetery 33 on Betio Island in the South Pacific, permission was given by the Busch family to exhume the remains in New York for testing.

A DNA revealed that Johnson’s remains were in the Buffalo gravesite in December 2019, but any hopes for a May 8, 2020, homecoming ceremony and military burial in Seaford were put on hold because of the pandemic. It wasn’t until Oct. 2 that Johnson’s family was able to watch him be interred near his mother and other family members at Odd Fellows Cemetery in Seaford, just across from Post 6.

The post’s location was by no means how involved it became in Johnson’s homecoming. From an escort from Baltimore to Seaford to a post-funeral event, Post 6 did its part in welcoming home Johnson and honoring his surviving family.

“I said ‘we’ve got to get in front of this, and (Post 6 Service Officer Bob McClain) said ‘I’ve called the people already and they want us to be involved,’” said Roy Lamberton, Post 6’s historian and public relations officer. “And it just went from there. When they finally said they were going to fly (Johnson) in, the Riders just jumped on it. It was a true (Legion) Family deal.”

McClain, who also serves as post chaplain, said he was contacted by Johnson’s family almost 20 months ago after they were notified Johnson’s remains had been properly identified. McClain said the post wanted to do something special for Johnson’s two surviving nieces – Janet Starr DeCristofaro and Judi Thoroughgood – and their families

And it did. Johnson’s remains were flown from Hickam Air Force Base in Hawaii to BWI Airport in Baltimore on Sept. 28, where members of American Legion Riders Chapter 6 were waiting on the tarmac to salute as the flag-draped casket was escorted off the plane and to the hearse. The Riders then provided an escort from the airport to the Cranston Funeral Home in Seaford.

Post 6’s Riders also organized an escort for Johnson’s hearse from the funeral to Odd Fellows Cemetery for the burial. “It was an incredible honor to be able to have some involvement in bringing him back,” ALR Chapter 6 Riders Director Jack Thomas said. “We were all totally humbled by it. It was very emotional. We just wanted to do it. He’s one of our own. We didn’t know him personally, but his story was over eight decades. It was against all odds he would eventually wind up right next to his mother in the (cemetery). And the fact we were able to have a hand in that, and to bring him home with honor, that humbled us.”

Members of Post 6 went to the viewing at the funeral home, and then attended the funeral, which included full military honors and a flyover by a B-25 Mitchell bomber. The post hosted a repast following the funeral that included a sit-down dinner prepared by American Legion Auxiliary Unit 6. Members of Sons of The American Legion Squadron 6 placed U.S. flags every six feet around the post’s front lawn to honor Johnson and his family, while the post’s sign read “Welcome Home Lt George M Johnson USAAF WWII.” State senators also attended the repast, reading proclamations honoring Johnson.

“To us, this was a once-in-a-lifetime happening, and we wanted to do our best,” McClain said. “And it was such an honor to be part of it.”