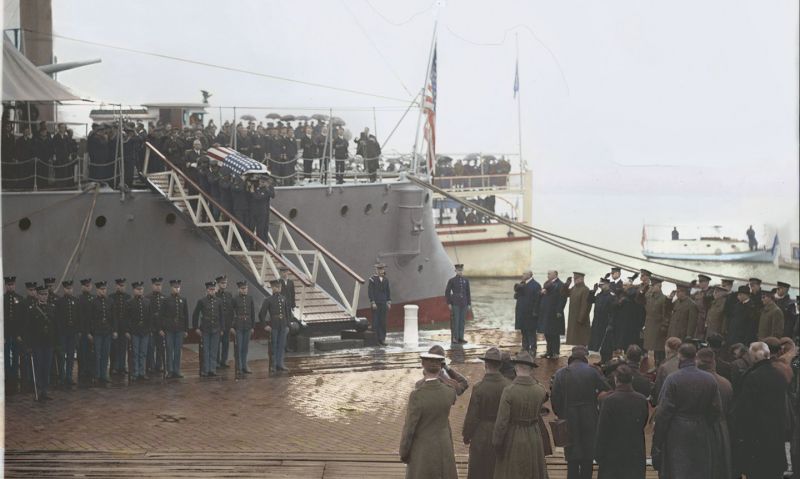 The remains of the World War I Unknown Soldier are carried off USS Olympia at Washington Navy Yard on Nov. 9, 1921. Colorized photo courtesy Independence Seaport Museum

On Oct. 25, the Independence Seaport Museum (ISM) in Philadelphia will livestream a ceremony commemorating the centennial of the risky 16-day voyage that brought the remains of the World War I Unknown Soldier back to America.

The event, titled “100 Years Later: The Unknown Soldier’s Journey Home Aboard USS Olympia,” will take place aboard the historic Navy cruiser, which has been docked at ISM on the Delaware River since 1996.

En route to the nation's capital, Olympia confronted the remnants of two hurricanes, withstanding 20- to 30-foot waves. Through it all, Marines stood watch over the Unknown Soldier’s casket, lashed to the ship’s deck.

Throughout 2021, ISM has partnered with the Society of the Honor Guard, Tomb of the Unknown Soldier’s Centennial Committee for programming, discussions and digital content. A special exhibit, “Difficult Journey Home,” runs through Nov. 25 and tells the story of how Olympia’s captain, crew and Marine honor guard risked their lives to bring the Unknown Soldier to the nation’s capital.

During the ceremony, Olympia’s bell will ring to mark the exact moment the Unknown Soldier was brought aboard Oct. 25, 1921. Later, a gun volley between Olympia and the battleship New Jersey will mark the moment Olympia got underway from Le Havre, France, making its final voyage across the Atlantic and arriving at the Washington Navy Yard on Nov. 9, 1921.