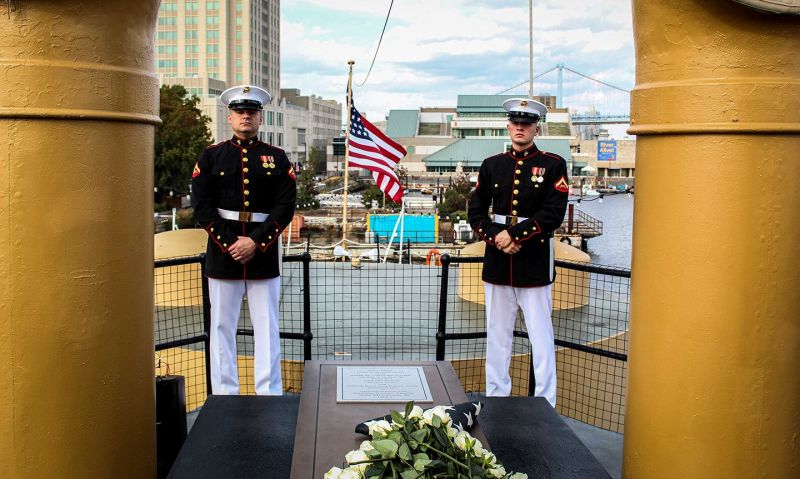 U.S. Marines stand near the spot on USS Olympia's signal bridge where the casket of the World War I Unknown Soldier was laid for transport to the United States 100 years ago. Photo by Daniel Kennedy, Independence Seaport Museum

As the centennial of the dedication of the Tomb of the Unknown Soldier nears, every chapter in the shrine’s history is being honored – including its namesake’s perilous journey home aboard USS Olympia, 100 years ago this week.

Already famous for its role in the Battle of Manila Bay in the Spanish-American War, the cruiser ended its career by transporting the remains of an unknown World War I U.S. soldier to America, for interment in a specially designated crypt at Arlington National Cemetery. Olympia’s 16-day passage began Oct. 25, 1921, when it departed Le Havre, France, for the Washington Navy Yard, arriving Nov. 9.

On Monday, a ceremony aboard the historic warship – moored on the Delaware River at the Independence Seaport Museum (ISM) in Philadelphia – commemorated that final, sacred mission.

“I would say traveling across, the unknown became the Unknown,” said Craig Bruns, ISM’s chief curator. “It’s kind of mystical in some ways. It’s transformative, like a Homer voyage or something. This individual is going to represent larger ideas.”

Eclipsed by the Tomb and its significance, the dramatic ocean crossing of the unidentified soldier himself is mostly forgotten. As Bruns puts it, “Olympia picks up the body, and in the next paragraph, Olympia drops off the body. We’re always like, ‘What about the ship?’ Slowly but surely, digging through things, we’ve found this story – and it’s a compelling story.”

Speaking roughly 30 feet from the place where the Unknown Soldier laid, Brig. Gen. Walker Field, president of the Marine Corps University, described how sailors and Marines covered the casket with a protective wooden shell and waterproof tarps, then secured it using “an impossible amount of rope, abundantly woven between two uprights that are still there today, like oversized yarn woven around a child’s fingers.”

Every precaution was taken. Capt. Graves Erskine, the Marines’ commanding officer and a decorated combat veteran, remembered the punishing waves he’d experienced on his way to England years earlier and anticipated rough seas ahead.

In fact, as Olympia left France, a Category 3 hurricane hit the Florida coast. As it accelerated northeastward and weakened, it was absorbed by an extra-large tropical cyclone – possibly the remnants of another hurricane that had circled near the Azores. Olympia was headed into the aftermath.

Erskine’s Marines “were honor bound to stay that casket through all that the sea could hurl upon them on the journey home, and hurl it did,” Field said.

Every hour, every minute, they guarded the Unknown Soldier, in roaring winds and towering waves that threatened to sweep them overboard. Determined, the Marines lashed themselves to the ship’s rails. One lost his boots when they were filled with sea water and carried away. Still, they remained at their post.

As Olympia pitched violently, her skipper, Capt. Henry Lake Wyman, asked a Navy chaplain to pray for the  crew and the safe arrival of the Unknown Soldier in the nation’s capital. On Nov. 6, the seas began to calm, as starving boilers required all hands to move the cruiser’s coal stores forward to feed the engines.

At last, on Nov. 9, the ship made its way up the Potomac and pulled alongside Pier 3 at the Washington Navy Yard, in a light rain.

“Olympia serves still as a fragile reminder of the stories and journeys that once were,” Field added. “This magnificent story I will most assuredly tell again, and I trust you will too.”

At 2:30 p.m., Olympia’s bell rang, marking the exact moment the Unknown Soldier was carried aboard, following by the sounding of taps.

No state, city or town was spared heartache during America’s involvement in World War I, and the Unknown Soldier quickly became a symbol of the loss felt by the entire nation, Philadelphia Mayor Jim Kenney told the crowd. Olympia’s crew understood all too well their duty.

“While their journey home was difficult, and those aboard faced the ultimate test of endurance as the ship battled its way through hurricane remnants, they did persevere,” Kenney said. “No man was left unchallenged – not the captain, not the boiler stokers, not the stewards, and certainly not the Marine commander and his honor guard, who tied themselves to the deck of the ship and to the unknown soldier’s casket, making sure he was not lost at sea. Their dedication should be an inspiration to us all.”

Representing the French Embassy, Col. Sébastien Pauly praised American sacrifice in the Great War, from volunteers who rushed to France’s defense in 1914 to the 2 million U.S. soldiers stationed there when the Armistice was signed four years later. More than 53,000 were killed in battle.

“They now lay in peace either in the U.S. or in my country,” Pauly said. “Too many graves bear no name, like the Unknown Soldier whom the cruiser Olympia brought home a century ago. Though unidentified, these soldiers are known for what they represent: freedom, dedication to a peaceful world, friendship and heroism. On both sides of the Atlantic, we will never forget them.”

At 3:28 p.m., Olympia and the battleship New Jersey – anchored across the river – exchanged a gun volley to mark the moment Olympia steamed away from Le Havre 100 years ago.

Following the ceremony, guests placed white roses on the spot where the Unknown Soldier’s casket sat, which now bears a historical marker.

Among them were the family of American Legion founder and U.S. Rep. Hamilton Fish of New York, who in 1920 introduced legislation in Congress providing for the return of the remains of an unknown American soldier killed in France and his interment in a tomb to be constructed at Arlington National Cemetery in Virginia.

Also present was a contingent of Legionnaires from Benjamin Franklin Post 405 in Philadelphia.

Craig Nesbitt, a retired Marine Corps major and Post 405’s adjutant, said he was “humbled and proud to be a small part of this ceremony, and to pay honor to the Unknown Soldier.”

To stand on Olympia’s deck in solemn remembrance of its voyage home was a privilege, agreed Andy Waskie, Army veteran and Post 405’s second vice commander. “It was an absolutely gorgeous day, and you couldn’t ask for better weather on the river,” he said.

A historian, Waskie appreciated Field’s vivid retelling of the Unknown Soldier’s crossing, calling it “a thrilling episode ... Can you imagine seeing Marines lashed to the casket, trying with their own bodies to prevent it from being lost? That actually happened.”

Post 405’s participation is meaningful because of its own unique history, which -- like Olympia -- reaches back to the 19th century, he added. Chartered in 1920, Post 405 took on the mantle of Gen. George G. Meade Post 1 of the Grand Army of the Republic, a fraternal organization formed by Civil War veterans.

“We are their successors. We’re continuing that tradition to the present day -- 160 years of patriotism, love of country, and support for veterans and their causes and activities and events.”

Peter Seibert, chief executive officer of the Independence Seaport Museum, said the Tomb's centennial has been a great opportunity to highlight the 126-year-old Olympia.

Commissioned in 1895, Olympia was the flagship of Commodore Thomas Dewey at the Battle of Manila Bay in 1898, then decommissioned shortly thereafter. It returned to active service in 1902, serving as a training ship for naval cadets and a floating barracks in Charleston, S.C. During World War I, it patrolled the U.S. coast and escorted transport ships.

At the end of 1922, Olympia was decommissioned for the last time in Philadelphia, where it’s been ever since. In 1996, ISM took on the responsibility of maintaining the cruiser, which is the last of its kind -- a ship where sailors still slept in hammocks and had ditty boxes, but with the turrets and guns and steel plating of battleships to come.

“She stands in both those worlds, and she stands alone,” Seibert said. “There just isn’t another one like her. I know that sounds like museum hyperbole, but it’s really true.”

ISM is also home to the submarine Becuna as well as several exhibits and displays. Olympia, though, remains central to the museum’s mission to showcase Philadelphia's maritime heritage. The cruiser’s steel came from Bethlehem Steel Works, just over an hour away. It's been anchored in the city for most of its life. Plus, Philadelphia is considered the birthplace of the Navy and Marine Corps, in whose histories Olympia’s temporary custody of the Unknown Soldier is a significant moment.

Though Olympia has undergone a partial restoration, more work is required, and ISM is planning a fundraising campaign to keep the world's oldest steel warship afloat and open to visitors.

Read a detailed account of Olympia’s stormy crossing of the Atlantic in the November 2021 American Legion Magazine digital edition.