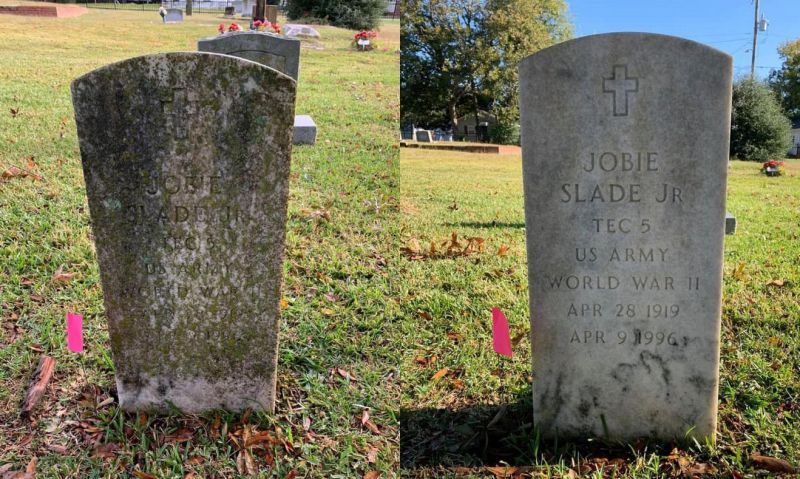 In 2019, the Whitehurst-Ware American Legion Post 539 in New Bern, N.C., celebrated the 100th birthday of The American Legion by cleaning the local World War I monument in front of the Craven County Courthouse. Their efforts revealed that the names of many soldiers, namely Black, who died during the Great War were missing from the monument. After extensive research, Post 539 members identified nearly 12 veteran names that were added to the 75-year-old monument. The post then held a rededication ceremony.

“It became one of the checklists to-do items to right a great wrong done to our Black and marginalized veterans through honoring their service and placing their names on the monument,” said Greg Ciesielski, Post 539 historian.

The identification of these 12 Black World War I veterans led to the question of where they were buried. Post 539 members became aware of the historic Greenwood Cemetery, a predominately Black cemetery in New Bern established in 1882. In their discovery, Legionnaires found the cemetery had been neglected – headstones were covered in moss and mold, vandalized, fallen over, sunken or lost with overgrown vegetation.

“You couldn’t read the names because of the filth and grime,” Ciesielski said. “It was a pitiful site.”

On Oct. 23, post members Mark Sandvigen and his wife Cheryl, Rachel Yuan, Dick Seale, Archie Asadourian and Ciesielski visited the Greenwood Cemetery to embark on a project of cleaning the headstones of veterans buried there. They marked each grave with a surveyor flag, took photographs and cleaned headstones for four hours.

“You get your brush, and you start scrubbing and you just see these headstones come to life. It’s really cool because now we can see the names of veterans we are dealing with,” Ciesielski said. “We felt very humbled to be out there amongst these veterans.”

The city gave Post 539 permission to clean the headstones and said records showed that 43 Black veterans were buried there, including six Union veterans of the Civil War. But the Legionnaires identified otherwise during their cleanup efforts. And will help the city update their records.

That’s 62 veterans “of all services interned in this one cemetery that have not received the care they deserve. No wreaths at Christmas. No flags on their graves,” Ciesielski said. The post will place American flags on the gravesites in advance of Veterans Day and hope to place wreaths during the holidays.

When it came to cleaning the headstones, the post connected with an organization that sells headstone cleaning kits – D/2 product, soft nylon brush, bucket. “It’s a detailed process but you can’t just clean headstones with any cleaner or you will do damage,” said Ciesielski, who shared that it took the Legionnaires anywhere from 15 minutes to an hour to clean a headstone depending on its material (granite or marble) and overgrowth.

“The veterans in Greenwood Cemetery have not only been neglected and are in complete disrepair, but they also never receive the annual recognition veterans in other cemeteries do,” said Post Commander Liz Hartman. “(The four Legionnaires and spouse) went above and beyond, and they have embodied The American Legion spirit. I am so proud of them.”

At the entrance to the cemetery a large banner hung on the iron gate that let nearby residents know what was going on – “American Legion Post 539 ‘Forever Remembered’ Veterans Headstone Cleaning Project.” Ciesielski said a few people came over to the Legionnaires to say “Thank you. That was really nice. It was just a humbling experience.”

Post 539 plans to visit the Greenwood Cemetery once a year to clean headstones. And Ciesielski believes this veteran headstone cleaning initiative “is something that ever post could do if they wanted to. It doesn’t require that much money; it just requires a lot of labor. It’s one of those events you can do where you probably won’t get many accolades out of it. But in your heart, you’re going to know you did a good thing.”

Ciesielski added that because city cemeteries often don’t have the upkeep like national cemeteries do because insufficient resources, he believes “The American Legion should lead the way on this. It’s what we have to do take care of our veterans.”