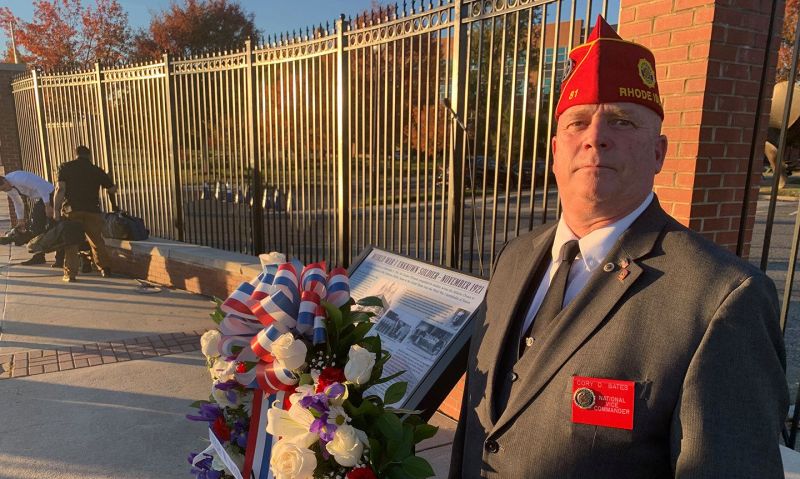 One-hundred years to the minute after the Unknown Soldier arrived at the Navy Yard dock in Washington, D.C., military leaders, American Legion representatives, former Tomb of the Unknown Soldier sentinels, civilians and the great-granddaughter of the New York congressman who wrote the 1921 bill that brought the hero home gathered along the Anacostia River to remember and honor what that moment meant to the nation.

“I think everybody who has served this country knows that there is a chance they might lose their lives, and not being remembered and not being known for what happened to them,” American Legion National Vice Commander Cory Bates of Rhode Island said at the Tuesday afternoon event. “This is a reminder that the country still knows, and the country still remembers.”

A floral wreath was placed along the river walk before an interpretive plaque that tells the story of the Unknown Soldier’s arrival on Nov. 9, 1921, before he was escorted to the U.S. Capitol Rotunda for two days of laying in state before the Tomb of the Unknown Soldier was dedicated on Nov. 11, 1921, when President Warren G. Harding presented him with the Medal of Honor.

The ceremony at the Washington Navy Yard River Walk followed a panel discussion at the nearby National Museum of the United States Navy where the story of the Unknown Soldier’s nearly catastrophic voyage across the Atlantic Ocean was recounted by Navy, Marine Corps and Coast Guard historians.

They reflected on the multi-service effort it took to bring the Unknown Soldier from the selection site at Chalons-en-Champagne in France, accompanied by a unit of uniformed American Legion members and French allies, to the port at Le Havre where the journey on the USS Olympia began. A Marine honor guard of 39 was assigned to the ship to protect the Unknown on the mission that involved ferocious hurricane-strength storms, 30-foot waves and a resolve by those onboard to somehow complete their 15-day mission on time.

Inside a big white tent, attendees at the Navy Yard Tuesday heard from Navy and Army leaders, as well as former sentinel Gavin McIlvenna, president of the Society of the Honor Guard, Tomb of the Unknown Soldier, which has organized events across the country, in France, Washington and Arlington National Cemetery.

McIlvenna noted that a centennial flag has toured the route taken by the Unknown Soldier through France during 100th anniversary ceremonies and that “the flag will be presented at the U.S. Capitol on Nov. 10 where so many of our Gold Star Families, veterans and fellow Americans paid their respects to he, who represents all. The flag will finally be flown at Arlington National Cemetery on Nov. 11, completing that journey home.”

Inside the flag case is a portion of wooden decking from the USS Olympia, marble shavings from the plaza of the Tomb of the Unknown Soldier that were collected after a recent reconstruction, soil from France and remnants of the crushed headstones of the three Unknown candidates of World War I who were not selected but were reburied at Meuse-Argonne Cemetery, when their headstones were replaced earlier this year. The flag replicates the Stars and Stripes draped over the Unknown Soldier’s coffin, which had to be fastened above deck because it could not fit inside the ship; Marines had to likewise rope themselves to the Olympia during the voyage to avoid getting thrown overboard in the roiling ocean.

“These fearless Marines did not leave their post,” U.S. Navy Vice Adm. Johnny Wolfe Jr. told the crowd. “And the Navy did not take this mission lightly. All we know is that the weather finally broke.” The change in weather, he noted, came after the ship chaplain was summoned to pray for safe passage of the Olympia and her precious passenger, amid horrific seas.

“We knew not who this is, but what we do know is that underneath that flag covering a casket that arrived here 100 years ago, was a person who left their life in the United States to answer the call, deployed to France and paid the ultimate sacrifice for our freedom, leaving behind the life and loved ones they would never see again, and the future they would never have,” Army Lt. Gen. Walter Piatt said at the gathering. “We won’t know every brave and courageous act of that person’s life. Those acts are known but to God.

“We know the final act was fighting for freedom and guarding the American way of life, as this person and others gave their last breath guarding our freedoms. It is only fitting we honor and eternally guard this patriot and the other Unknowns.”

“It was a very moving ceremony,” Bates said. “It’s quite an amazing story.”

Participating in the wreath-laying and plaque dedication was Rebecca Brock, great-granddaughter of U.S. Rep. Hamilton Fish, an American Legion founder, who drafted and introduced the bill that brought the original Unknown Soldier home.

“It is our hope that this plaque brings more visitors to the museum to learn not only about the Unknown Soldiers but our nation’s naval forces that protected him, not for self but for country, as they returned them home,” McIlvenna told the crowd. “It is quite fitting that on both sides of the Atlantic there are plaques honoring the service and sacrifice of this unknown American who fell in defense of others.”

For more information about activities to commemorate the centennial of the Tomb of the Unknown Soldier’s dedication, visit tombguard.org.