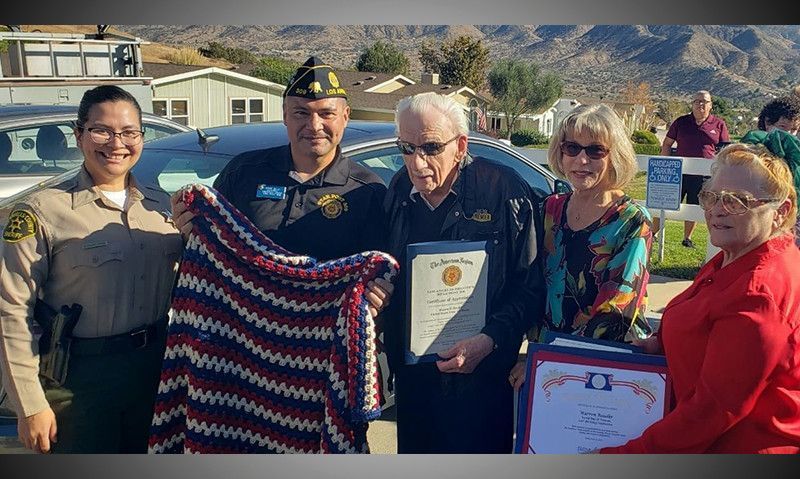 California Legionnaire and L.A. County Sheriff’s Department Lt. Ernie Bill never passes on a chance to meet a World War II veteran. When reached out to by a fellow L.A. County law enforcement officer about another opportunity to do so, the past post commander and current post adjutant of American Legion LA Sheriff's Star Post 309 wasn’t going to miss it.

Bille found out about Bauder’s birthday from Los Angeles County Sheriff’s Deputy Ray Wilson, who works out of the Palmdale Sheriff’s Station. Wilson himself has a military connection: His father, Myron “Mike” Wilson, was a Tuskegee Airman who died in 2001 at age 85. Myron was awarded a Certificate of Valor for flying 47 missions in the European Theater of Operations during World War II and flew missions at the beginning of the Korean War.

Wilson said he feels like he has a special connection to all World War II veterans because of the respect he has for service of his father – especially at a time when Blacks faced racism in the segregation within the military.

“He said it was tough for them, but he said he could never be mad at one whole race … because there were a lot of guys who were not the same race as him, and stuck their neck out and fought for them,” Wilson said. “They could have lost their opportunities and their careers … sticking up for him and the other Tuskegee Airmen. When he saw that happen in the military, he couldn’t hold any grudges against anyone.”

Wilson had found out through Bauder’s family that his 100th birthday was coming up, as well as learned about the veteran’s military service. During World War II, Bauder was a B-24 Liberator pilot who was shot down and temporarily held as a prisoner of war.

Wilson said Bauder and his family were dining out when he met them and began to talk. “They said that (Bauder) was a World War II vet, and I said, ‘wait a minute. A World War II vet?’” Wilson said. “I saw, ‘wow. Do you mind if I go (into the restaurant) and say hi to him and thank him for her service?’ Me and my partner went in there and thanked him for his service, and he couldn’t stop thanking us for what we do as law enforcement. And I’m like, ‘hey, man, you’re the rockstar here.’”

Wilson asked the family if he and his partner could stop by when they celebrated Bauder’s birthday to say hello. That’s when “me and my partner thinking of plans: OK, how can we crash their party without wrecking their party or taking over their party,’” Wilson said. “And it started growing.”

Wilson reached out to Post 309 and others to assist in honoring Bauder.

“Ray put the call out, and we answered in fashion,” Bille said. “The majority of the members of our post, like myself, are members of the L.A. County Sheriff’s Department, so throughout all of L.A. County we’ve got members. It went from there. We were able the provide the logistical aspects of it and participate in it.”

Wilson said the birthday greeting the group was able to give Bauder “was incredible. He totally appreciated it. One of the family members came up and said, ‘you guys brought tears to my eyes when I saw that caravan coming by.’ That really hit me.”

Bille got a chance to speak with Bauder. “I’ve been lucky enough to meet several World War II veterans. Anytime there’s one I have the opportunity to meet, I always take it,” Bille said. “In this particular case it was very special. It was really great talking to him. He has all his wits about him. He quipped, ‘I didn’t realize this many people knew I was still alive.’

“He’s got that demeanor that I’ve found from these gentlemen in the Greatest Generation. They’re like, ‘yeah, I fought in one of the greatest wars ever in history. OK. And I survived, and now I do this and help people out as much as I can and enjoy life.’ It’s very special to hear when they have that kind of demeanor and that kind of disposition: ‘life comes at me, we’ll face it and prevail.’ I love it.”