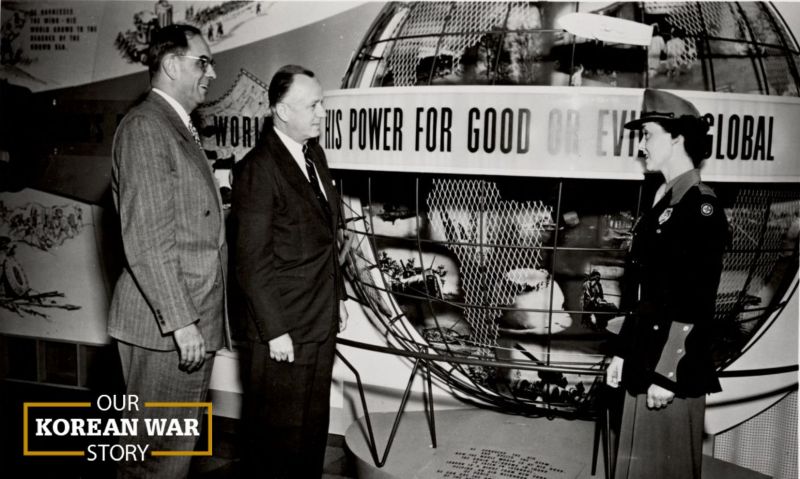 It was described as the “show that might save your life.”

The American Legion National Security Commission, along with departments and posts throughout the country, were throwing their support behind a nationwide touring display meant to energize civil-defense protections in the nuclear age. City X, the displays suggested, could be Target 1 in an attack from communist forces in Asia, who were at the time fighting Americans on, around and above the Korean peninsula.

“Alert America” consisted of three units of 10 32-foot trailers that, according to the May 1952 American Legion Magazine aimed to “revolutionize public thinking about the citizen’s responsibilities and dangers in modern war … These three convoys carry dramatic action exhibits with a vital, urgent story that you, Mr. Citizen, are Civil Defense. That you must act now, before it is too late, or America will not have the Civil Defense program it so badly needs to help keep the peace and to save our lives and our freedoms.”

The campaign to build up state and local civil defense awareness and participation – which The American Legion had executed during World War II – was organized by the Valley Forge Foundation. Equipment, exhibits, materials and personnel from government agencies contributed to the Legion-supported venture at the height of the Korean War and as world fears of atomic warfare began some of their earliest Cold War drumbeats.

“The goal of the Alert America campaign, presented in the form of realistic exhibits, is to inform and convince 150 million American people of the grim realities of today’s threat from foreign aggression, physically and ideologically, and of the use of modern terror weapons,” The American Legion Magazine explained. “The exhibits are educational in that they are aimed to instruct citizens on what they must do to protect themselves if war comes. It is designed to inform them that self-protection will become as instinctive with the man on the street as it is for a skilled soldier in combat. It is also a recruiting campaign – designed to convince all that civil defense is the duty of every citizen.”

The campaign announced a goal of enlisting some 15 million men and women to serve as civil defense volunteers – a “home-front army” – trained and ready to confront any kind of attack, atomic or otherwise.

"Alert America" convoys crisscrossed New York and New Jersey in May 1952 before hitting Chicago, Wisconsin and Minnesota. Other convoys toured the Southwest and Pacific Coast.