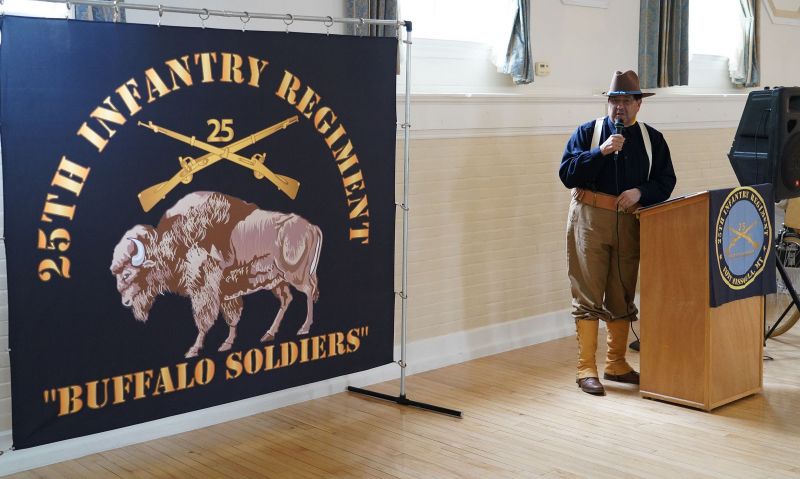 Thirty years ago, California Legionnaire Bobby McDonald was collaborating with author/sportswriter Michael Hurd on a book that would share the legacy of historically Black schools within the landscape of college football. While doing research for “Black College Football, 100 Years of History, Education and Pride”, McDonald came across a fact that inspired him to learn more about the Buffalo Soldiers – a search for knowledge that has become a passion for the U.S. Navy veteran.

McDonald is in Missoula, Mont., this week for the Buffalo Soldiers Iron Riders Gathering – an event of which he is co-chair of the planning committee and put together to commemorate the 125th anniversary of the Iron Riders historic 1,900-mile bicycle ride from Missoula to St. Louis. During a meet-and-greet Tuesday night, McDonald recalled how he first became interested in the Buffalo Soldiers, and why it continues to be a passion for the member of Newport Harbor Post 291 in California.

“In one part of the book, there’s a section that says the 62nd and 65th (colored infantry regiments) in 1866 – had pooled their resources to come up with $5,000 … to incorporate Lincoln University in Jefferson City, Mo.,” McDonald said. “Lincoln University was founded by the Buffalo Soldiers. So now I’m doing a football book, but in the back of my mind the Buffalo Soldiers pop.”

McDonald, who has an extensive background in both marketing and sales, now serves as president and executive director of the Black Chamber of Commerce of Orange County, Calif. Through a collaboration between the Chamber and Explorer Studios, two award-winning educational films have been produced: “Building the Dream” and “History of the Buffalo Soldiers.” He’s routinely invited former Buffalo Soldiers to Chamber events during his leadership tenure.

McDonald, who serves on the Department of Veterans Affairs’ Advisory Committee on Minority Veterans, also is a Buffalo Soldiers reenactor and member of the 9th and 10th (Horse) Calvary Association. Through that, he met fellow Legionnaire Ron Jones; the pair would dress in their Buffalo Soldiers gear and take part in various events and parades, including the Tournament of Roses Parade. They started riding horses but later switched to bicycles.

McDonald and Jones headed to Idaho in 2018 to take part in a ride at Coeur d-Alene, where McDonald learned more about the Buffalo Soldiers’ involvement with the “Big Burn”, a series of fires in 1910 that brought the Buffalo Soldiers stationed at Fort Missoula into Idaho to assist in saving the towns of Avery and Idaho.

On the way back from Idaho the group stopped in Missoula. He’d been aware of the Iron Riders prior to the visit but began to learn more. “It started clicking. There were some stories here,” McDonald said. “And that’s how we started working on this event.”

McDonald got the Association involved, and the result is a week-long event that included a five-mile bicycle ride, various presentations on segregated military units, a poker run and baseball game, and other events throughout Missoula.

“It’s a passion now. And the bottom line here is education. It’s positive history and engaging different people. And I’m very blessed to be involved with this.”

McDonald is the son of Vernon McDonald, who served with the segregated 1321st Engineer General Service Regiment in Europe and Okinawa during World War II. Vernon passed away at age 97 in January of this year. Bobby said his father didn’t talk about his military service very often until a bit later in life.

“The program was getting to the end, and he stood up and said, ‘That’s my son, and I’m proud of him,’” Bobby said. “And then he sat down.