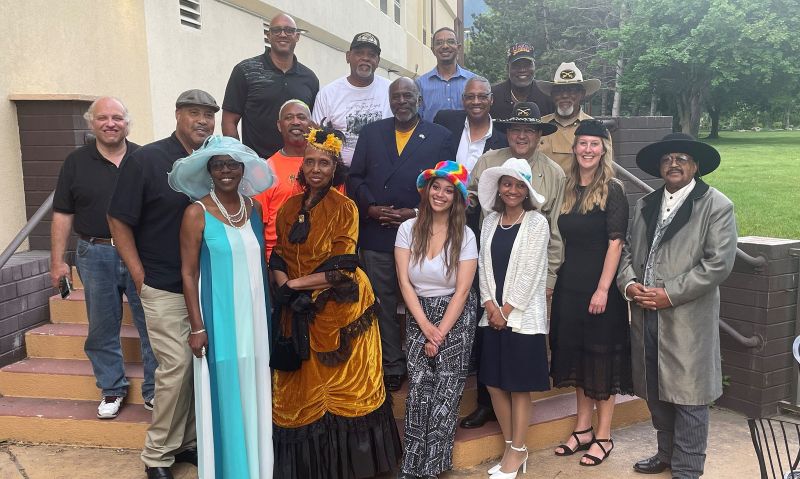 The former restaurant on the first floor of the Holiday Inn & Suites in downtown Missoula, Mont., took on a different feel Thursday night. Buffalo Soldiers jackets and casual wear were replaced with fancy dresses, sports coats and a few western bib shirts similar to what John Wayne wore in “The Searchers”.

It was high tea for those attending the Buffalo Soldiers Iron Riders Gathering commemorating the 125th anniversary of the Iron Riders’ 1,900-mile bicycle ride from Missoula to St. Louis. Since Monday, attendees have taken tours, heard presentations, attended a baseball game and even were guests at a film festival.

But this week’s gathering, and previous 9th and 10th (Horse) Cavalry Association Annual Reunion, are much more than those aspects of the event.

“It’s like a family reunion,” said Leanna Rogers, the association’s assistant treasurer and a member of the Greater North Carolina Chapter. “We develop a bond with each other. If you’re in their town … they offer to show you anything, take you out to eat, offer you a place to stay. This is what they do. It’s like an extended family. We try to treat each other that way.”

Rogers, who retired from the Army National Guard in North Carolina in 2005, was one of the charter members of the association’s Greater North Carolina charter members, despite having “no idea who the Buffalo Soldiers were,” she said. “I guess I was lacking in history. I came to the first reunion, and I met all these wonderful troopers who had some great stories to tell. They were such interesting things they talked about, and I wanted to continue to be a part of it and give back and keep the history alive.”

During high team, the party goers had finger foods, played games and each shared something about themselves. Each attendee also got a gift bag. And, of course, there was tea.

As to the idea for staging such an event, Rogers said the idea came about during the association’s 2016 reunion that also honored the 150th anniversary of the Buffalo Soldiers.

“We wanted to do something different,” she said. “We have a Junior Buffalo Soldiers Corps, and we try to have something to raise money for our youth. We thought about doing a high tea because we wanted people to put on (fancy) clothes – nothing you had to go out and buy – and we told the ladies to wear hats. The bigger, the better.

“They started to really enjoy it, so every year they were like, ‘are you going to have a high tea?’ So we do this, and we give them little gifts. We have different themes every year. And the funds that we generate from our high tea we give to our Junior Buffalo Soldier group. We do a youth summit (annually), and we have that money so we can help with that.”

Earlier in the day, the Buffalo Soldiers were the subject of a film festival at Missoula’s The Roxy Theater. Attendees watched screening of the short “Buffalo Soldiers: The Beginning”, as well as the documentaries “Following the Lieutenant” and “Bicycle Corps: America’s Black Army on Wheels”.

Following the screening, those in the audience had the opportunity to ask questions of William Byers, a retired U.S. Air Force military policeman, the owner of Explorer Studios and the producer of the first film; and Eric Westrom, who directed “Following the Lieutenant”.

Westrom’s documentary highlights the Iron Riders’ 1,900-mile trek from Missoula to St. Louis and said he felt the story needed brought to light after being “so underappreciated,” he said. But the documentary didn’t end there, instead going on to share the sad ending for some of the 25th Infantry Regiment’s soldiers. After the Spanish-American war, 167 soldiers from the 25th were assigned to Fort Brown in Brownsville, Texas, were race relations were already charged.

At around midnight on Aug. 13, 1906, several shots were fired in town, killing one white man. Though the white officers stationed at the fort attested all of the 25th’s soldiers were in their barracks, the mayor and others in town said they’d seen them shooting the streets. Without any legitimate proof against the Black soldiers, President Teddy Roosevelt – who’d fought alongside members of the 25h during the Spanish-American War – gave all 167 soldiers a dishonorable discharge, taking away their salaries, pensions and military honors. It’s considered to be Roosevelt’s worst mistake during his presidency; in 1972, the U.S. government reversed the decision and awarded the final two living 25th soldiers $25,000 each.

Westrom said he couldn’t in good conscience leave that part out of what was otherwise an inspiring and uplifting story. “I feel like there’s an obligation,” he said. “You’ve got to show what happened no matter what, even if it’s something horrific like Brownsville and the aftermath of Roosevelt just turning his back on all those soldiers and everything they spent their lives working on defending this country. That was, to me, just a huge slap in the face. As a filmmaker, and even as a journalist, you have to present that.”

Byers talked about filmmaking and the importance of subject matter, but also took the time to praise Missoula and its residents. “I’m just so honored to be in your community that has supported African American history (and) our legacy for 125 years,” he said.

That was music to the ears of Emily Rolston, co-chair of the gathering’s planning committee and Group Sales Manager for Destination Missoula. “It makes me feel wonderful,” she said. “A couple of other people have said they’ve just felt that the Missoula community is so welcoming. We’ve heard that over the years in Missoula, and I want that to stay.”

Rolston, who attended Iron Riders events throughout the week, said that the connection between the city and the 25th Cavalry plays a role in the community rolling out the welcome mats for the Buffalo Soldiers and their guests.

“I grew up here, and there’s so many pieces of this history that I’ve actually learned myself, and I think that a lot of our community members are learning,” Rolston said. “But there are definitely those who do know the history and see the Buffalo Soldiers jackets and know.”

The Iron Riders gathering moves to Wallace, Idaho, June 17 for tours and the dedication of the Buffalo Soldiers Monument. It returns to Missoula June 18 for more tours and presentations before wrapping up Sunday with a Juneteenth Celebration.