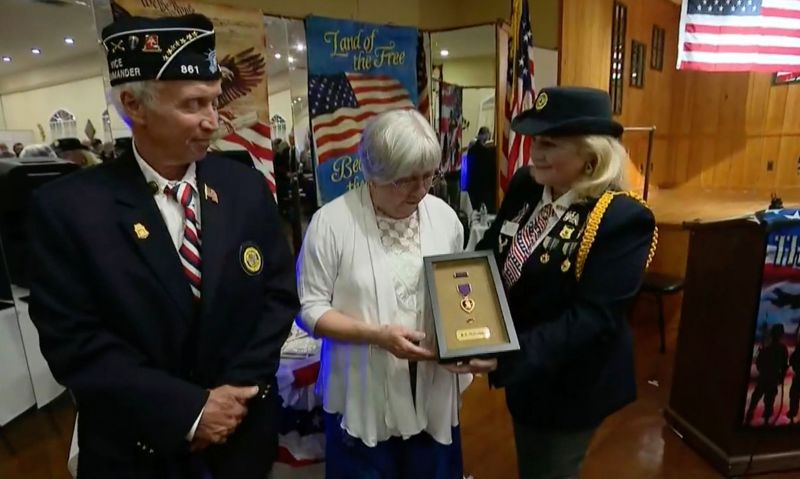 The chance discovery of a World War II Purple Heart at a yard sale led to a daughter learning something about her father she’d never known – thanks to a New York American Legion post and its community.

Lisa Dabrowski, a member of New York’s American Legion Auxiliary Unit 1 who serves as the Public Information Officer for Post 861 Mattituck, N.Y., found a Purple Heart for sale for $100 earlier this summer while at a yard sale on North Fork. The Purple Heart had no connection to the family selling it.

Dabrowski let the post know, which offered to buy the Purple Heart, but the family selling it then decided to donate it. That started the search to learn more about the recipient, listed only as R.S. Hollaman, and to find out if Hollaman had any surviving family members. And it resulted in the recipient’s daughter flying 3,000 miles from Seattle to receive the Purple Heart in a special ceremony at Riverhead Polish Hall in New York.

“When I first saw the Purple Heart, at the yard sale, back in April, I knew, right away, what it was, what it meant, and I knew what it took to be awarded one,” Dabrowski said. “I wanted to make sure that it was given respect.”

Not only was the medal saved, but it was reunited with its recipient’s daughter: Lynn Bryson, a Seattle resident and the daughter of Robert Stuart Hollaman, a World War II Army veteran who died in 2010. When Hollaman returned home from the war, he gave his mother the Purple Heart, who he had been living with in Patchogue, before eventually getting married and moving away from Long Island.

Bryson said her father “never” talked about his military service, including the fact he was wounded by mortar fire in the Philippines to earn the Purple Heart. Finding out through the discovery of his award was the result of several “miracles”, in Bryson’s own words.

“I was overwhelmed with joy,” Bryson said. “Words cannot express the gratitude I have for the folks who are so dedicated to preserving the honor of our military people. It’s so amazing. (The medal) stayed safe and protected for 75 years. The miracles of this saga just kept unfolding one after another.”

After getting the Purple Heart, Post 861 decided it wanted to frame the medal in a shadow box and learn more about Hollaman. The medal was taken to Jamesport Art & Framing, where owner Kristen Asher-O'Rourke not only offered to frame the medal for free, but also began researching Hollaman in the hopes of tracking down his family.

“It’s such a cool item to end up on your desk at work,” Asher-O’Rourke said. “It was curiosity. It was just the desire to find out who this man is, why he (was awarded the Purple Heart), just learn a little bit of the backstory. And then see if his family were still local or where they were. It was … just a desire to help this family, whose father and husband had received such a prestigious award.”

Locating Bryson “took a lot of steps,” Asher-O’Rourke said. “She wasn’t listed in his obituary. It was a lot of Ancestry.com, Googling, phone calls even to Canada where Robert was originally from. When I finally did get a hold of her, it was amazing. She was choked up. She told me she was over the moon. What was even more shocking to me was she had no clue her father had been given this award. It was a very special moment being able to share this with her.”

Eventually, Asher-O-Rourke was able to track down Bryson’s aunt, and through her a cousin to whom Bryson is very close. “I get this call from (my cousin), and she says, ‘These people are trying to contact you.’ That’s how it happened,” Bryson said. “It was a miracle they found me.”

The decision was made by Post 861 to invite Bryson to New York for a presentation ceremony. Bryson said the post took care of the “whole nine yards” for her trip East to get the medal in person.

“It was so impressive, and I realized (it was) the culmination of all the people that made that moment happen,” Bryson said of receiving the Purple Heart. “I was so honored to be honoring my father for his service. I’m very proud that he was my dad.”

Also in attendance at the presentation was 99-year-old World War II veteran Donald Bayles, who had read a story in a local newspaper about the finding of the medal. He did some research himself and realized he and Hollaman were inducted in the Army on the same day, with serial numbers just four digits apart. Bayles also believed he had served in the Philippines with Hollaman on the island of Mindanao.

“Not only did (Bayliss) find all sorts of local articles about my family, he found the article of enlistment of those people in Patchogue, and they were both listed: my father and Mr. Bayles,” Bryson said. “I’m envisioning they’re in the same line in the Patchogue recruiting office, four people apart. The story just became more miraculous step by step.”

Watching Bryson receive the Purple Heart “was so touching,” Asher-O’Rourke said. “You could see how overwhelmed with joy she was. I don’t know her and her family … but as another human being, seeing the emotion and how deeply moving it was to her, that was just an amazing experience.”

For Dabrowski, finding the medal and then seeing it reunited with Hollaman’s family “brought about many a feeling. I wanted to make sure that it was respected. But it also brings to mind how many other Purple Hearts end up being discarded, for whatever reason. Perhaps, it is simply because there is no one left in a family.

“But, here, we have one that is returning home, and that brings me a tremendous relief in knowing that it is back with family, and great joy to see how many lives have been affected in such a positive way.”