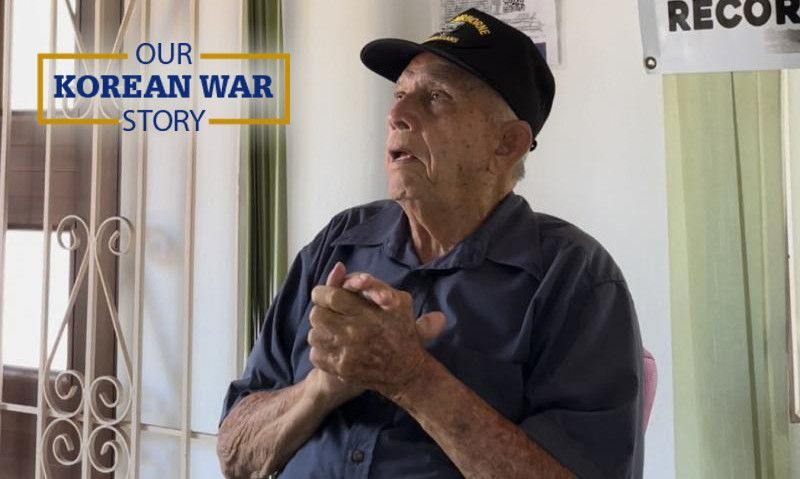 Puerto Rican soldiers distinguished themselves for their valor during combat in the Korean War. PFC Segundo “Kun” Garcia-Ruiz is a perfect example of this courage. He was born in Ponce, Puerto Rico, and at 95 the Korean War hero is still going strong. In a recent interview he gleamed with pride of his military service. Garcia-Ruiz first joined the Puerto Rican National Guard in 1945 and served for one year. Yet that was not going to be the last of his military service.

Shortly afterwards, he moved to New Jersey and found work at the Ford Corporation making military parts. In 1949 he entered military service again in Newark, N.J. His love of airplanes and flight fueled his decision to request airborne training. He completed jump school at Fort Benning, Ga. Afterwards he was assigned to serve with the 187th Infantry Regiment in the Korean War. Garcia-Ruiz made two airborne jumps and was wounded on his left foot with this unit.

He shared his experiences with the 65th Infantry Regiment. He was seriously wounded and received a Purple Heart. He talked about the members of his squad who either died or are still MIA. With noticeable emotional discomfort he spoke about his good friends Luis Pacheco Lespier and Jorge Bernal, both killed in action (KIA). His two friends were also from the town of Ponce.

He sadly recalled that Bernal, who he knew from high school, had expressed a premonition that he may not survive the war. Garcia-Ruiz remembered trying to convince him not to talk negatively, but his friend insisted. Earlier that month they had been given some RR time in Japan, and Bernal had purchased a handkerchief for his sister. He asked Garcia-Ruiz that in case he didn’t make it, to ensure his sister receive his gift. Days later he was killed in combat. Garcia-Ruiz had secured the handkerchief and was determined to keep his promise to his brother in arms.

The 65th was a tough unit. They earned a total of 709 Purple Hearts during the Korean War. Douglas MacArthur, then commander of the United Nations forces in Korea, said, “The Puerto Ricans forming the ranks of the gallant 65th Infantry on the battlefields of Korea is writing a brilliant record of achievement in battle and I am proud to have them in this command. I wish that we might have many more like them.” In 2014 in an official ceremony by then-President Barack Obama, the 65th Infantry Regiment were awarded the Congressional Gold Medal. The soldiers of F Company certainly are testimony to this gallantry. Weeks after the death of his two childhood friends, Garcia-Ruiz was seriously wounded and was removed from the front lines. He was sent to Japan for treatment, where he spent the next six months. He was awarded a Purple Heart for multiple wounds received to his left leg, right forearm and face.
According to Garcia-Ruiz's DD-214 he was awarded the United Nations Service Medal; Parachutist badge; Occupation Medal Japan; Korean Service medal with one Bronze Star; Purple Heart; and Combat infantry Badge. Eventually he was returned to Puerto Rico where he was finally discharged from Camp Losey on July 17, 1953.

Upon his arrival in Puerto Rico, Garcia-Ruiz set out to visit the families of his friends who had died in combat in Korea. He nervously spoke of his encounter with the mother of Luis Pacheco Lespier. He recalled how she squarely looked at him, making strong eye contact, and asked him how her son had died in Korea. He said that he quickly responded that he had died like a hero. Afterwards, they talked for hours. Weeks later he visited Bernal’s parents’ home. He told them about his son’s courage and gave the handkerchief to his friend’s sister, Olga Bernal Medina.

Garcia-Ruiz continued talking to Olga. They started dating and eventually married. They had two children who are very proud of their parents’ accomplishments. They were married for over 50 years. Olga became a well-known musician and teacher in Puerto Rico; she passed away in 2018.

Pvt. Segundo Garcia-Ruiz became a commercial pilot and flew spraying herbicides for the agricultural industry for decades. He has had multiple close calls and was depicted in a local newspaper as the acrobat of the skies. He owns a small airport called Lajas Agricultural Airport, where he still tinkers with airplane parts. He also keeps his collection of military memorabilia, which includes a mint WWII-era U.S. military jeep. He enjoys visiting the hangar a couple of times a week. His son, who has followed his footsteps in the aviation world, runs a flying school from this airport. His daughter is also a licensed pilot but has chosen to earn her living as an anesthetist at a local hospital.

Garcia-Ruiz’s life can be a script for a Hollywood love story. His love of country encouraged him to serve in the military. He served with utmost dignity and valor as a paratrooper in the Korean War. He underlines that his combat experiences were traumatic and emotionally scarring, yet he survived. He was able to transform one of the saddest moments of his life into his lifelong love. What a love story! He commits to his buddy to take a handkerchief to his sister if he is killed in the war. His friend dies in combat as predicted, and Garcia-Ruiz keeps his promise. He takes the handkerchief and falls in love with the sister. They date and then are happily married for over 50 years. Together they flourished with a beautiful family. This is true love cultivated from the ashes of war. Airborne!