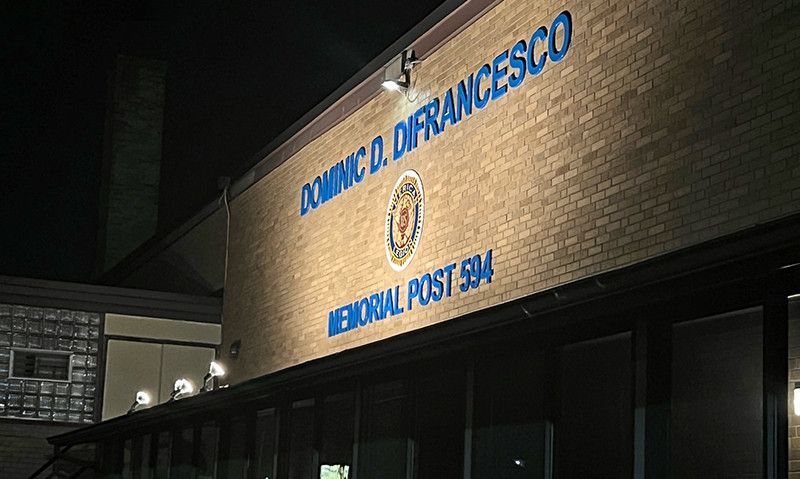 The familiar corner seat is empty, permanently reserved during special events, like this. Candles glow. Flags rise up from a desk set next to a framed portrait. The bronze name plate reads: NATIONAL COMMANDER DOMINIC D. DIFRANCESCO. For any other function, there would be a glass of red wine. This time, however, it’s champagne. The occasion is more special than others.

Dominic DiFrancesco had been a member of American Legion Post 594 in Middletown, Pa., for 67 years. Now – a year after the Korean War Navy veteran passed away at age 88 – it has been renamed in his honor. National, department and local American Legion leaders gathered with the past national commander’s family members Saturday for a dinner and ceremony that concluded with the official renaming/rededication of Dominic DiFrancesco Memorial Post 594.

“I think every one of us here learned to respect and love that guy,” American Legion Department of Pennsylvania Commander Craig Wilhelm told the crowd. “He was a mentor for a lot of us. He taught us … the right way to do stuff. I will always remember him.”

American Legion Past National Commander Ronald F. Conley choked back emotions as he told of his years of working with DiFrancesco on projects and programs, including the American Legion of Pennsylvania’s Housing for Homeless Veterans initiative that originated in the 1980s and has since helped hundreds who served get back on their feet.

“Dominic and I traveled the same paths,” Conley said. “It really broke my heart when he passed away. The commander (Wilhelm) mentioned that he was a mentor. Well, he was also a friend. He was a friend to me, and we worked together on various projects in this department. We worked together to try to get the right people into the right offices at the right times. And I think Dominic and I accomplished that. I took his lead because he was No. 1, and I was No. 2.”

DiFrancesco served as American Legion national commander in 1991-92. Conley was elected to lead the nation’s largest veterans organization a decade later. Only four veterans from the Department of Pennsylvania – including first National Commander Franklin D’Olier – have held that office.

Conley said DiFrancesco’s success came straight from the heart. “He loved this organization. He loved what The American Legion stood for. He would get really mad if anybody brought discredit to The American Legion, and you can’t blame him for that.”

The son of a World War I veteran Legionnaire who signed him up immediately after discharge, DiFrancesco stayed in the organization, served in dozens of leadership capacities and brought his family along for the ride. His sons and daughters grew up to become devoted American Legion Family members.

“Growing up in this family – this Legion Family – my sisters, my brother, myself, since we were young kids, have learned and have been taught well that everybody in this room is loved and admired and considered part of our family,” said Tony DiFrancesco, the past national commander’s oldest son, who spoke for the family at the event. “We appreciate each and every one of you for being here.”

National Vice Commander Paul Kennedy also spoke of DiFrancesco’s deep devotion to family – and the importance he placed in making his children part of the American Legion experience. “He was a great Legionnaire, great father and great friend. I’m proud to be here today. I am proud of Dominic. I am proud of what he did with this post. And I am proud of the DiFrancesco family.”

“We all loved him,” National Executive Committee member Mike Stelacio said. “He treated us like family. He was always kind and gentle, always fun to be with – a great individual.”

Department Chaplain Richard Dennison said he was once at a low point in his American Legion journey, and it was DiFrancesco and Conley who encouraged him and gave him new opportunities.

“He never chewed you out without telling you something you did well, too,” Dennison explained. “That is the mark of a good and strong leader. All of us in the Department of Pennsylvania benefited by his leadership. I am here today as chaplain of this post because there was a time in my Legion career when I became discouraged, and I was ready to leave The American Legion.” Personal calls from the past national commanders changed that.

“We have this saying, ‘Be the One.’ When someone is feeling down, you can be the one to reach out and touch them,” Dennison said. “Both Dominic and Ron, when I was down, they were the ones for me. And if past national commanders can be the one for me, we can all be the one for someone else.”

Department Adjutant James “Woody” Hogan, who knew DiFrancesco for nearly 30 years, said he still thinks of him whenever he is facing a difficulty. “Sometimes, I sit at my desk at work, struggling with an issue, and I look to the sky and ask Dominic what I should do. He always tells me.”

Now, he explained, that presence is permanent at the post now named in his memory. “Thank God, this post is named for Dominic. In some cultures, it is said you only die when they stop saying your name. Dominic’s name will be said forever, as long as this post is here.”