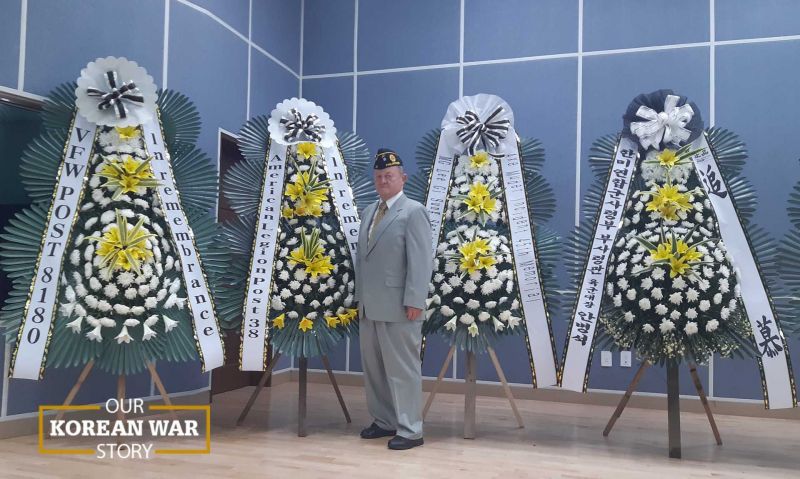 Steve Tharp, commander of Lewis L. Millett American Legion Post 38 in Seoul, attended the Barrett-Bonifas Memorial Ceremony held by the United Nations Command Security Battalion-Joint Security Area (JSA) in Camp Bonifas on Aug. 18. The memorial ceremony at JSA honored two American soldiers, Maj. Arthur Bonifas, of Newburgh, N.Y., the Joint Security Force company commander, and 1st Lt. Mark Barrett, of Columbia, S.C., the 1st Platoon leader. Both soldiers were brutally axed to death on Aug. 18, 1976, during a routine tree-trimming operation near the Bridge of No Return by North Korean soldiers. The memorial ceremony marked the 46th anniversary of the killing of the two soldiers. Three days later, the United Nations Command launched Operation Paul Bunyan in an overwhelming show of force against North Korea. Backed up by two eight-man teams from the 2nd Infantry Division, a 64-man South Korean Special Forces company and two 30-man security platoons from the Joint Security Force, the tree was successfully cut down without any resistance.
During the memorial ceremony, Tharp, South Korean and U.S military members laid flowers at the site where the poplar tree once stood and paid their respects to the victims. The commander of the 2nd Infantry Division, Maj. Gen. David Lesperance, who was also at the event, said North Korea continues to develop capabilities that threaten not only South Korea, but regional allies and partners of the United States. "Like them (Bonifas and Barrett), we must strengthen our iron-clad commitment to security on the Korean peninsula, which has endured for 72 years, and never take it for granted."