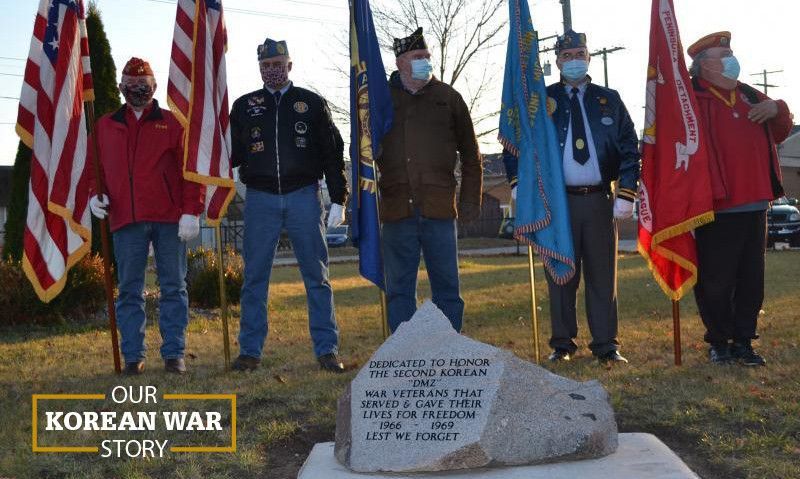 Just in time for Veterans Day 2020, the Delta County Veterans Memorial Park in Gladstone, Mich., with help from the local Marine Corps League and August Mattson American Legion Post and Sons of The American Legion Squadron 71, begot a new monument to recognize those who served and died in battle on the Korean Peninsula during a conflict left out of many history books.

The events formally known as the “Korean DMZ Conflict” and colloquially as the “Second Korean War” were a series of battles that took place in the demilitarized zone (DMZ) between North and South Korea between 1966 and 1969. While 92 American lives were lost in clashes with North Koreans in the DMZ, the battles were overshadowed by the larger conflict taking place in Vietnam during the same period.

In 2018, Bob Nachtwey of Bark River set out on a mission to have a memorial for those in the DMZ conflict placed in Washington, D.C. His quest put him in touch with Bill Hafeman of the Powers American Legion post, who wrote a resolution to create a memorial and have it placed next to the existing Korean War Memorial in the capital city. Despite Nachtwey and Hafeman’s efforts, the issue stalled, and whether or not a DMZ memorial will ever be built in Washington remains uncertain.

That didn’t stop Nachtwey from seeking other ways to honor those who served in the conflict. Post 71 put him in touch with the post’s past commander, Wayne Berthaume. Without hesitation, Berthaume said Nachtwey could put a memorial at the Delta County Veterans Memorial Park, which is located between Superior Avenue and North 8th Street in Gladstone and is owned by the Legion.

That got the ball rolling. Berthaume, along with Squadron Vice Commander Don Couillard, poured the concrete pad for a memorial to sit on. Contributions were also made by Ken Hogan, who served in Korea, and by the local Marine Corps League.