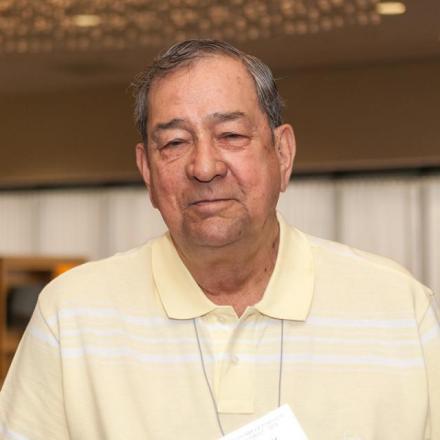 At 16, Elliott Sortillo joined the 31st Infantry Regiment and participated in the landing at Inchon, South Korea. The unit headed south to Pusan, where it boarded a ship to make another landing at Iwon in the north.

When his company went to Koto-ri to join U.S. Marines and British Royal Marines for a push north, the temperature was 35 below zero, and the convoy was ambushed by the Chinese. After fighting all day and night, the units in the front got through, but Sortillo’s unit in the rear did not. Near daybreak on Nov. 30, 1950, their part of the convoy was surrounded. “Some men escaped, but it was everybody for themselves,” he says. “Mass confusion.”

On the march north, Sortillo teamed up with Eddie Curd, a British Royal Marine. They both suffered from frostbite, and to survive they helped each other avoid being shot for lagging or left behind to freeze to death. On Feb. 3, 1951, they arrived at the town of Pyoktong, which became Camp No. 5 and their jail for the next 31 months.
They slept with 12 to 15 other men, head to toe in a tiny hut with a mud floor. “Everyone had lice, in their clothes and on their bodies,” he says. “It was very tough trying to delouse in subzero temperatures.”

Sortillo spent his 17th, 18th and 19th birthdays as a POW, subjected to communist propaganda daily and having little to eat – frozen turnips, millet, soybeans, boiled potatoes, barley. “All I wanted was a vanilla milkshake, like I used to get back in Philadelphia for a quarter,” he says. “I dreamed about it for three years. I finally got it and was sick as a dog.”
After his release, he re-enlisted and eventually served in Vietnam with the Special Forces. “I told my wife not to worry about me being captured again. ‘The first time they were fighting a boy,’ I said. ‘This time they’re fighting a man.’”

Sortillo returned to Korea in 1968, stationed at the DMZ with his old outfit, the 7th Infantry Division.

“I have post-traumatic stress,” he says. “I have a lot of bad dreams and flashbacks, and I’m in Korea and Vietnam every day. My team sergeant in Vietnam was killed a few years after we served together. His name is on the Wall, and I see his face all the time.

“My granddaughter in Texas put it best: ‘Pop Pop, it is what it is. Some people make it, some people won’t.’”