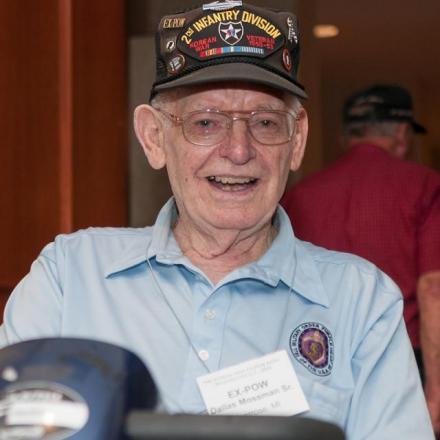 A native of Flint, Mich., Dallas Mossman decided to join the Army in the final months of World War II. As soon as he turned 17, he went to Aberdeen Proving Ground for training and then to Germany.

When he returned in 1948, he got in line with thousands of other soldiers at Camp Kilmer to be processed out. Hearing he could avoid a wait and leave immediately if he volunteered for the reserve, he signed up for two years.

In November 1950, Mossman was working for Buick, days away from his reserve time being up, when he got orders to report to Fort Campbell, Ky. There, he learned that the Army had him for another year.

Once he got there, Mossman thought he’d do what he’d been trained to do: mechanic. “The sergeant tells me, ‘You’re going to the infantry.’ I said, ‘You can’t do that.’ He says, ‘We just did.’”

His company was ordered to Hill 1051 on the No-Name Line, and on May 17, 1951, that’s where the Chinese got him. After shooting a few enemy soldiers, Mossman slid down the hill and came upon three comrades. Two Chinese were digging foxholes above them, and as rocks rolled down they pinged off their helmets, giving them away.

During his 817 days as a POW, Mossman often was in trouble for loudly resisting indoctrination. Instead of studying the communist newspapers,
“I sat on the front porch and sang hillbilly songs, making the guy in charge of us mad,” he says. “He was out to get rid of me, and he did.”

Mossman was moved to another camp, where his days were spent digging trenches and going on wood details.

One of his worst days, early in captivity, was losing his foxhole buddy, Frank Plocha of Rocky River, Ohio, to dysentery – one of the chief causes of POW deaths in Korea.
After the war, Mossman drove trucks for Anchor Motor Freight. He and his late wife, Constance, had two children. In his memoirs, he says that he doesn’t have any regrets about Korea, but that he wishes “everybody could have lived, not just me.”